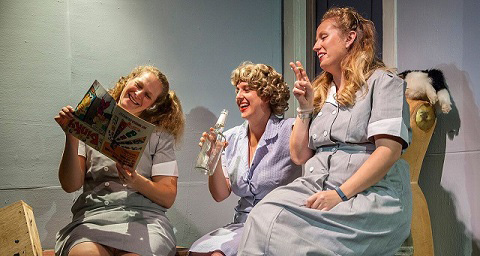 When staging a musical at a community theatre you often have to choose between casting an actor or a singer. In this production of Little Shop of Horrors at the Ghent Playhouse, Michael C. Mensching has cast singers and then leaned heavily on boosting the comedy and emphasizing the ensemble in order to compensate. Trouble is that Little Shop is a tragedy and not an ensemble show. The “jokes” spring directly from character and situation, both of which are tragic rather than comic in nature. This is a show where you have to laugh or else you’ll run screaming from the theatre. By playing tragic figures like Seymour Krelborn and Audrey as funny happy people, the show is bled of both its pathos and its humor.

But this is community theatre and it is wonderful to see a dedicated theatrical community come together and craft a solid production of this beloved and technically difficult show. Mensching gives each of his talented singers a moment to shine, and they are often breathtaking. The story suffers, but the production entertains.

For a small cast show, Little Shop places big demands on the design crews. The set calls the interior and exterior of Mushnik’s Skid Row Florists to be visible and for movement between the two to be fluid. The interior set for the shop needs to be rearranged during musical numbers, and there is another complex interior of a dental office that needs to appear and disappear quickly for just one scene. And then there are the puppets…

Companies have two choices with their Audrey II puppets – build or rent. Ghent has rented and with rather shopworn (pun intended results.) The crew has valiantly performed as much cosmetic surgery as possible and they are fortunate to have Matthew Coviello, an experienced Audrey II puppeteer, manipulating the two largest iterations of the carnivorous plant.

Mensching has not shied away from innovation in this production, and while some efforts are more successful than others, the one that got me and my wheelchair in the car and down to Ghent was the casting of a woman, Hollie Miller, as the voice of Audrey II. I have long advocated for experimenting with this gender switch and was excited to see what would come of it. And darned it a truly terrible sound system, barely wrestled into submission by Eric Bello, didn’t rob me of the opportunity. Miller could barely be heard and all of the lyrics were lost. I was crushed to be thwarted from enjoying her performance which I could tell was fresh and professional.

Mensching’s other biggest innovation comes in the transformation of the female trio of black teenage street urchins into white middle-aged diner waitresses: Katie Duff Snyder as Crystal, Elizabeth Corey as Ronnette, and Nellie Rustick as Chiffon. As I said, Mensching has cast singers, and this trio carries lead or back up on almost every number. Each gets her moment to shine, and when Snyder let loose with her opening riff about “Skid Row” it was a truly electric moment of musical theatre.

Costume designer Joanne Maurer has crafted three identical cotton candy pink car-hop style uniforms which are flattering to the women’s figures and give them visual cohesion. I have seen productions where a large chunk of the costume budget has gone into quick changes for the trio and this was a neat way to save money and set the period for the show. If only Maurer had been allowed to costume Audrey as cleverly.

Audrey is usually played to look like Marilyn Monroe dressed as a cheap hooker, and sound like she has inhaled at least a quart of helium. While Audrey doesn’t need to be bleached blonde – Kelly Seinkeiwicz is a red head – she does need to be more clearly defined as a woman incapable of loving herself. Seinkeiwicz failed to capture Audrey’s self-loathing, her pathetic passivity, and that “deer-in-the-headlights” fear that should come over her face when she realizes she has overstepped the huge boundaries that she perceives surrounding her. I had high hopes that Mensching and Seinkeiwicz were going to give me a truly tragic Audrey, and then the heavy emphasis on gag comedy took over, but not before Seinkeiwicz gave a heartrending rendition of “Somewhere That’s Green.”

Comedy is Mensching’s only hope with Joseph Sicotte’s Seymour. Once again, this man can sing, but he is young and has a ways to go as an actor. The fulcrum moment in this show, where it tips from comedy to tragedy, is in the number “Feed Me” as Seymour sings “I don’t know…” Sicotte sang those words loud and clear, but he never meant them. In fact, Mensching had him turned upstage, endless misting plastic plants on the shelves so that we couldn’t even see his face, let alone understand his emotional turmoil. And of course Seymour sings that duet with Audrey II, who couldn’t be heard or understood.

Michael Meier is one of the creepiest Orin’s I have ever seen. His height and musculature make him truly physically threatening, which is why I wish Mensching had allowed Audrey to stay in a more tragic vein. That is a big strong ruthless angry man beating on her – not a recipe for good times and big laughs.

Set Designer Michael MacDermott and his crew have used every inch of the Ghent stage to to encompass the world of the play as well as accommodate the three piece ensemble, under the musical direction of pianist Joanne Mensching, which provides the fine accompaniment.

Mensching states in the program that he has long held a director’s vision for Little Shop and I am glad Ghent has provided him with a venue. This show is so well written and the songs so tuneful and perfectly meshed with the libretto that there is always plenty to enjoy in a well sung production like this. There are plenty of spooky Halloween style touches to make this a memorable Autumn outing.