A dynamic and captivating “Kimberly Akimbo” at Barrington Stage 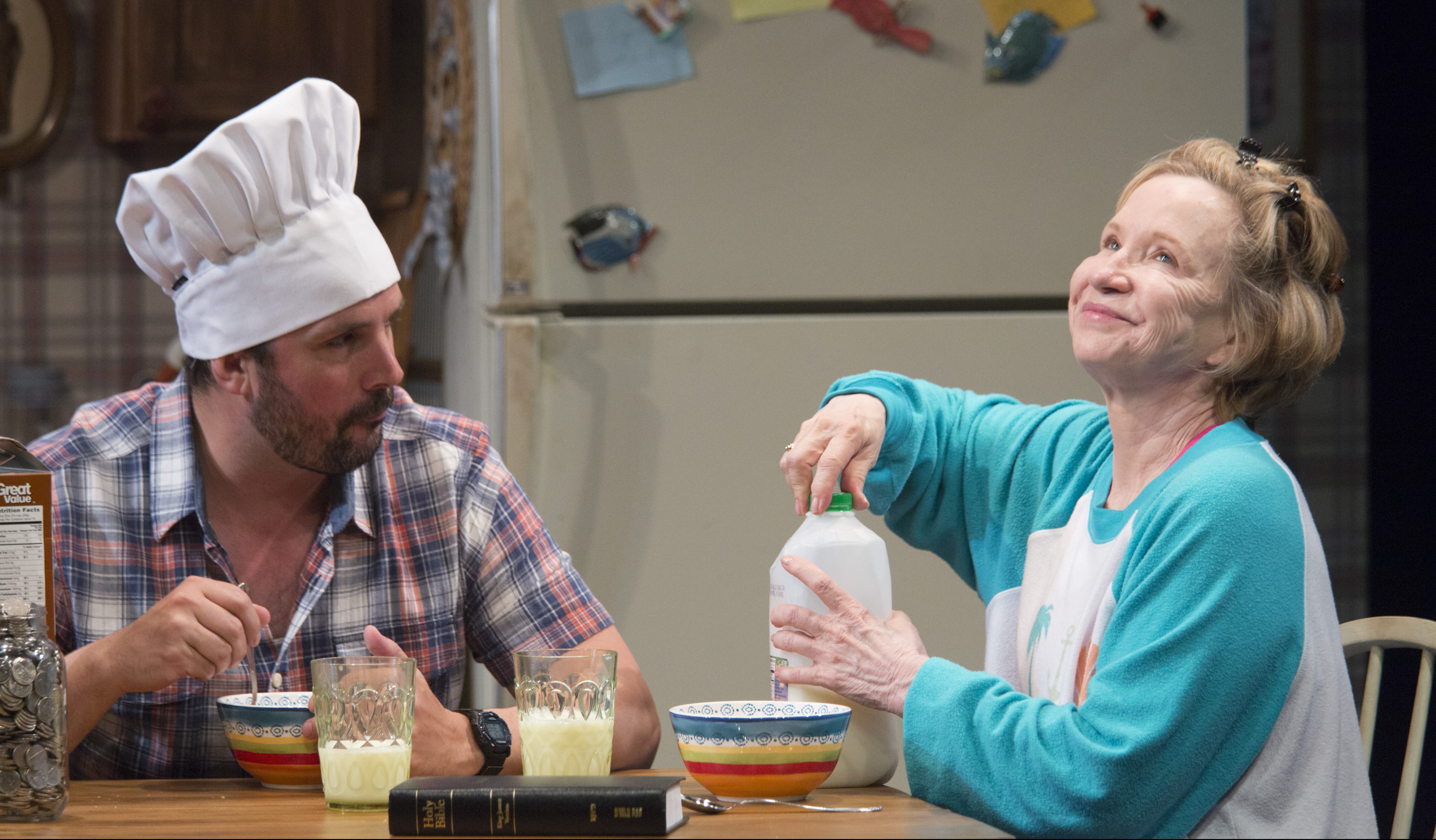 A dynamic and captivating “Kimberly Akimbo” at Barrington Stage

David Lindsay-Abaire won a Pulitzer Prize in 2007 for his play Rabbit Hole — a story of a family that has lost a child who was struck by a car and killed eight months earlier. He has also given us plays filled with off-beat humor such as Fuddy Meers, Wonder of the World and Kimberly Akimbo which is currently receiving a dynamic production at Barrington Stage’s St. Germain Stage in Pittsfield.

Kimberly (Debra Jo Rupp) has the aging disease progeria; though she is only sixteen, physically and internally she is past middle age on the verge of dying. She knows how to deal with the condition, but she is also a member of a highly dysfunctional family that has recently moved from Secaucus, New Jersey to Bogota, New Jersey under mysterious circumstances. Her father Buddy (Chris Thorn) is an alcoholic who works in a gas station and often forgets his responsibilities to his daughter. Pattie (Jessiee Datino,) her mother, is pregnant, has been operated on for carpal tunnel syndrome and is self-involved. Aunt Debra (Jessica Savage) has been in and out of jail several times and is currently homeless. The only relatively sane one in her life, and that’s relative, is Jeff (Adam Langdon,) a classmate who creates anagrams and is a Dungeons and Dragons aficionado.

Kimberly, despite her youth, is the only rational character and she also displays a moral center. She knows but does not fear what lies ahead. She attempts, sometimes vainly, to teach her family members the difference between right and wrong and how to act as a grown-up.

A plot description would suggest that this is a dark and somber play. To the contrary, it is hilarious and touching without being maudlin as the characters’ idiosyncrasies are the source of much of the humor. The story line may be somewhat superficial, but it is the relationships among the five characters that captivate us.

What is even more captivating are the acting, direction and technical elements. Debra Jo Rupp as Kimberly leads an ensemble cast that works together like a well-oiled machine. The acting is flawless. They get their well-deserved laughs and often earn our empathy. Rupp, who last appeared at Barrington in Dr. Ruth: All the Way and was on television’s “That ’70 s Show,” is the anchor of the show and captures the demeanor and vocal expression of a teen-ager. Her lines and zingers are thrown with authority and her work is complemented by the rest of the cast.

Rob Ruggiero has directed with a sure hand. The show moves at a brisk pace, but the audience doesn’t miss a beat. The blocking is fluid and precise creating interesting stage pictures. The tone he and his cast have created is this side of being cartoon-like, but it underlines Lindsay-Abaire’s comic and thematic intentions. Scenic designer Timothy Mackabee has created a versatile set that changes within seconds to various locations so that the build of the play continues without lagging. Costumes by Tricia Barsamian identify the characters without being over-stated. Matt Richards’ lighting and Vincent Olivieri’s sound complement the tenor of the production.

If you enjoy compelling stage work; if you like to laugh; if you want to see terrific theatre, get yourself to Kimberly Akimbo!

Kimberly Akimbo is playing at the St. Germain Theatre on Linden Street in Pittsfield, MA and began June 16, 2016 opened on June 19 and runs through July 16. The performance runs 2:05 including an inermission. For tickets call 413-236-8888 or go to WWW.BarringtonStageco.org.