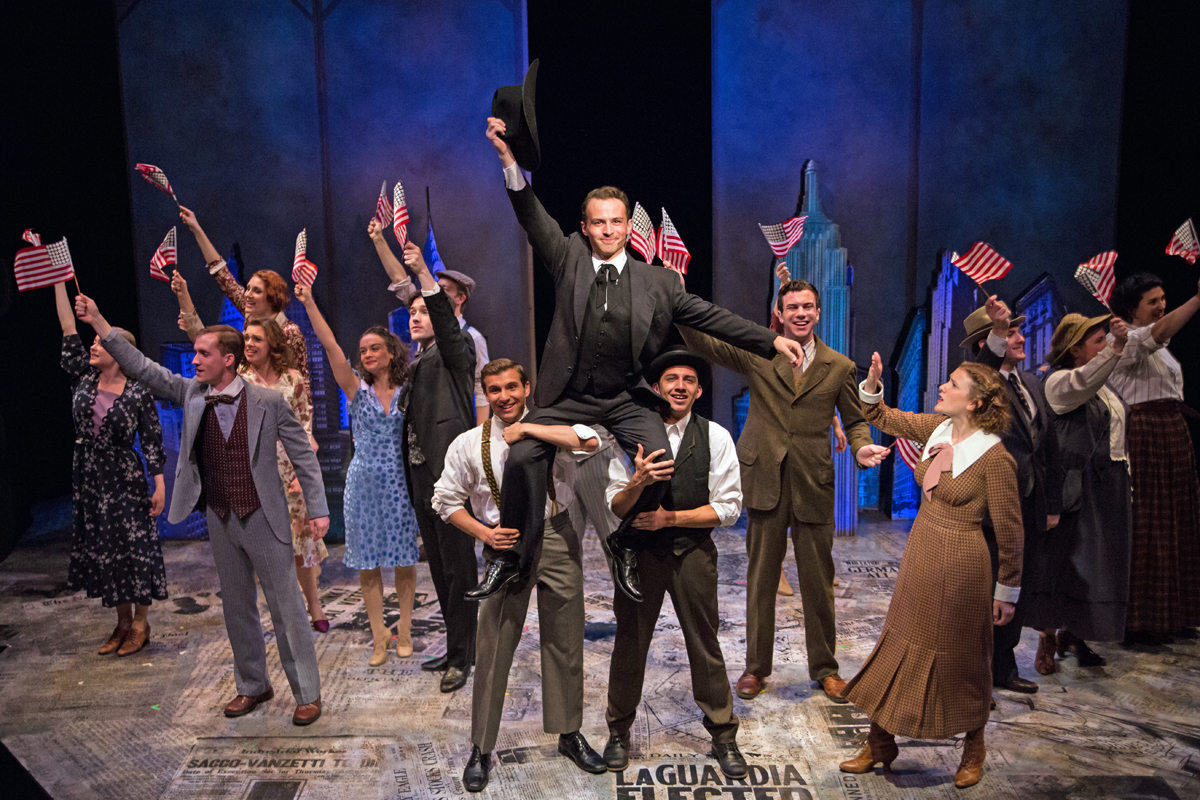 A victorious “Fiorello!” with Austin Lombardi as the memorable Mayor. Photo by Emma Rothenberg-Ware.

Back in 1959, Fiorello! was the hit show that scooped up a Pulitzer for best drama, and tied with the The Sound of Music for the Tony as best musical, leaving Gypsy in the dust. Tom Bosley, as Fiorello LaGuardia, won best actor.

As delivered by a youthful cast, Fiorello! moves right along with a breezy score by Jerry Bock, clever lyrics by Sheldon Harnick, and this is a good thing because the weak link is a thin, choppy book which has undergone various revisions over the years. The program credits Jerome Weidman and George Abbott for the version currently on stage at the Unicorn Theatre in Stockbridge. It seems close (if not identical) to the original which I saw some 56 years ago. Memories fade, though I remember how much I enjoyed songs like “Politics and Poker,” “Little Tin Box,” and “Till Tomorrow.”

The cast of Fiorello! is uniformly excellent, a parade of characters and caricatures that easily delight today’s audiences just as they did those a half century ago. Who doesn’t love to watch love blossom on stage between a policeman -a sturdy Dan Cassin – and the radical striker, Dora (Chelsea Groen).

Jerry Bock and Sheldon Harnick went on to write Fiddler on the Roof and She Loves Me, but for Fiorello!, they concentrated on LaGuardia’s pre-mayoral career and love life with side trips into smoke filled rooms and the high life of Tammany Hall’s corrupt Mayor, “Gentleman” Jimmy Walker.

Playing the short and squat Mayor (LaGuardia was only five feet tall) is Austin Lombardi, whose appearance is far from that of the character he plays, so his performance is not able to capture the charismatic, mercurial spirit of a diminutive man with an oversized personality. When you are short and portly, as Fiorello certainly was, you have to compensate.

LaGuardia was married twice, his first wife, Thea (Rebecca Brudner) having passed away on the night he lost his first run for Mayor of New York. As Marie, his long frustrated second wife, Katie Birenboim delivered her solo “The Very Next Man” with palpable passion. As the political hack and party boss Ben, Rylan Morsbach was at the top of his game, having fun as he led his motley crew of operatives through their paces. From the ensemble, Michael Brahce stood out with a strong, clear and compelling voice that deserves to be heard more.

As director, Bob Moss had his hands full moving people in and around, on and off the stage which basically had a single multi-functional set by Carl Sprague. This required the actors to play moving men (and women) bringing on and taking off all manner of desks, chairs, telephone switchboards and the like. Infused with choreographic aplomb this is entertaining but also showed the limitations of the Stockbridge campus, the Berkshire Theatre Group’s two older theaters. Both lack sufficient stage depth, wings, and flies. Also suffering from lack of stage space was the choreography of Michael Callahan, which largely consists of circling the stage, first this way, then that way. He compensates by devising many upper body motions as you can in see in the classic raised arms in the montage above.

The costumes by David Murin are numerous and well done. The use of amplification in such a small theatre (about 100 seats) is a disservice both to the audience and the performers. If young performers are to be judged properly, their natural voices are what one wants to hear, without the distortion given by amplification. If singers can fill a 3,000 seat opera house with their voices alone, is it too much to ask that young and vital singers have the ability to project out to the tenth row of an intimate theatre? The music accompaniment – a piano and violin – only hint at the richness of the Jerry Bock score since they lack the texture of the Irwin Kostal arrangement which is glorious.

Overall this production is up to summer stock standards, and a solid choice for an affordable summer-evening-in-the-Berkshires outing. Given the show’s attack on business-as-usual politics and the struggle of the working stiffs, it is very timely as well.