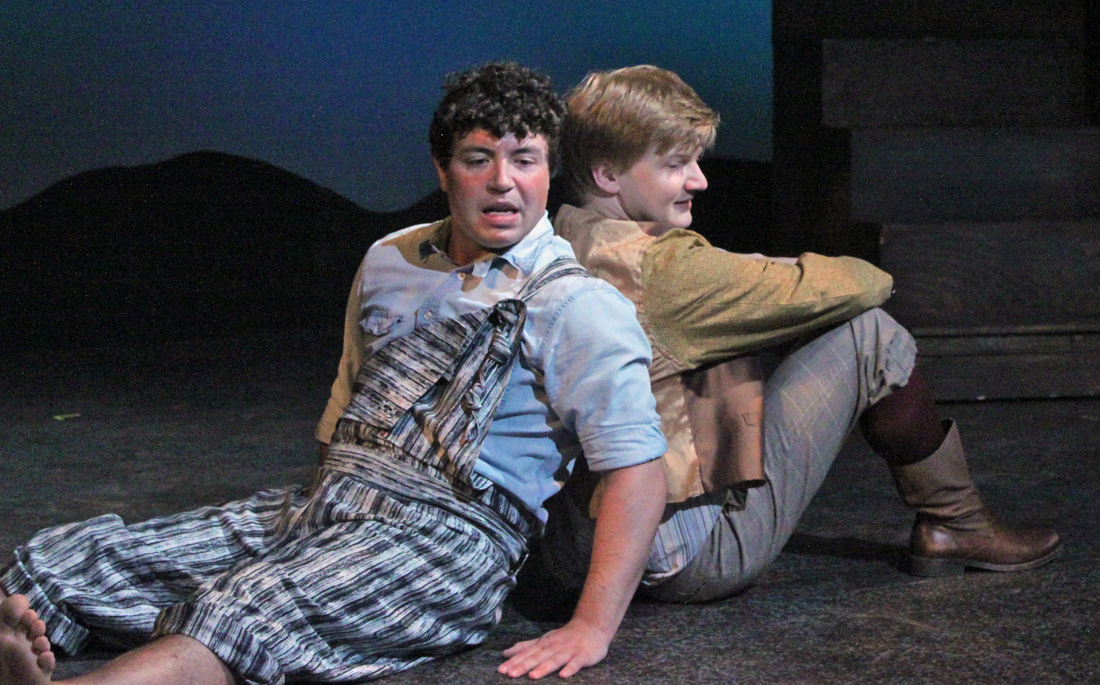 I am on record several times over with my loathing of The Adventures of Huckleberry Finn, which I generally refer to as “two-thirds of a great novel,” and I didn’t like Big River the first time I saw and reviewed it many years ago, but Oldcastle has done the impossible and CHANGED GAIL BURNS’ MIND!! Thanks to the directorial vision of director/choreographer Tim Howard and his very talented cast, I finally see and accept this story for the ground-breaking piece of anarchy that it is.

The last third of Twain’s novel remains an embarrassment, but the reason the rest of the story soars is the central relationship of Huck and Jim as they glide down the Mississippi on that raft. Two outsiders – a runaway slave and an orphaned lower class boy who are, as composer/lyricist Roger Miller so aptly writes, “Worlds Apart” – on a grand adventure. And while all of this production is fine and entertaining, the show really takes wing during the song “Muddy Water” when Huck and Jim hit the river. Here Howard and lighting designer Scott Cally bring Dan Courchaine’s previously spare set to vivid life as the raft rolls and the waters of the Mississippi swirl around it and Huck and Jim’s hopes are so high and yet so close that they can reach out and touch them…

Anthony J. Ingargiola simply IS Huckleberry Finn, portraying the character’s vulnerability as well as his much touted tough and mischievous sides with energy, humor, and a fine voice. Huck has not had an easy life, and, now that he is about 14, society is expecting him to start taking on adult responsibilities. Reji Woods is a gentle Jim, patiently schooling Huck that “Slaves Lives Matter” while steadfastly focused on his goal of gaining his own freedom and reuniting his family.

Big River arrived on Broadway in 1985, but librettist William Hauptman and composer/lyricist Roger Miller astutely avoided all temptation to update Twain’s story and make it “politically correct.” Miller, who by his own description grew up “dirt poor” in Oklahoma, had never read Twain’s book but when invited to consider turning it into a musical saw immediate parallels to his own childhood a century later. In other words, he approached it from a personal level without the burden of the “civilizing” opinions of education. Big River cleaves closely to Twain’s original and its language and characters reside squarely in the mid-19th century. That means they use the “N Word”…a lot…because that was exactly how people spoke back then.

With a cast of sixteen, this is the largest show Oldcastle has mounted in its new Main Street venue, and Courchaine has wisely opened the performance as wide as it will go. John Foley and his small band of musicians are tucked neatly in one corner, and everything else – a few crates, an old trunk, one large multilevel set piece, and Huck and Jim’s requisite raft – all roll in and out only when needed, allowing the talented cast plenty of room to bring Howard’s lively direction and choreography center stage. There is not a lot of bright color on the set or in Roy Hamlin and Ursula McCarty’s costumes, as there wouldn’t have been in Huck and Jim’s life. The color is provided by Cally’s lighting design, and by the larger than life performances of the actors.

Howard is Professor of Theatre and Coordinator of Musical Theatre at Western Connecticut State University, and many of the young performers in the cast are his students there, including Thomas Bergamo (Ben and others), Jillian Caillouette (Joanna and others), Alana Cauthen (Alice and others), and Matt Grasso (Simon and others). Oldcastle regulars Christine Decker (Widow Douglas and others), Peter Langstaff (The King and others), and Richard Howe (The Duke and others) delight, as usual, in some of the showier peripheral roles. John Fitzpatrick is a real live wire as the overly imaginative Tom Sawyer. And Bennington native Sarah Solari, a recent graduate of Mount Anthony regional high school, makes a fine OTC debut as Mary Jane Wilkes with a strong solo in the second act.

Miller was a prolific songwriter, winner of many, many Grammys. He even took home a couple of Tonys for this, his only attempt at musical theatre. His most famous tune is “King of the Road” (although I confess a penchant for his lesser known opus “You Can’t Rollerskate in a Buffalo Herd”) which could easily be the ballad of a late 20th century Huck Finn. The score of Big River is redolent with the sound of country, bluegrass, and gospel music, and here musical director John Foley, has augmented the typical line-up of guitar, bass, drums, and keyboard with the cello, harmonica, and Jew’s harp for an authentic sound.

Mark Twain set Huck’s tale in the 1840’s when slavery was the legal norm, but he wrote it in the 1880’s and 1890s, post-Civil War, post-Emancipation Proclamation, post-Darwin, when both laws and ideas were changing, and yet even people like Harriet Beecher Stowe and Abraham Lincoln could not imagine an integrated American society. That is what Huck and Jim show us in miniature, the two races face to face grappling with each other’s realities and coming to an understanding. Despite the current turmoil and tragedy, this country by and large IS integrated, and it is good to look back at where we were and where we are, so we can set course for where we need to go.

Black lives matter. This is the startling truth Huck Finn stumbles upon during his and Jim’s odyssey down the river. Towards the end of Big River, Huck prays for his soul because he cannot find it in his heart to do the right and legal thing and return Jim to slavery. And he comes to the conclusion that he is just damned and going to Hell because he wants to help Jim gain his freedom. It is a liberating moment for Huck, who, at the play’s end, rejects “civilization” entirely and strikes off alone for the frontier. We may be coming to a point in history where we need to look to Huck’s example and cast off the old ways for bold, new ideas about “civilization.”