“Big River” at Sharon (CT) Playhouse has energy and panache 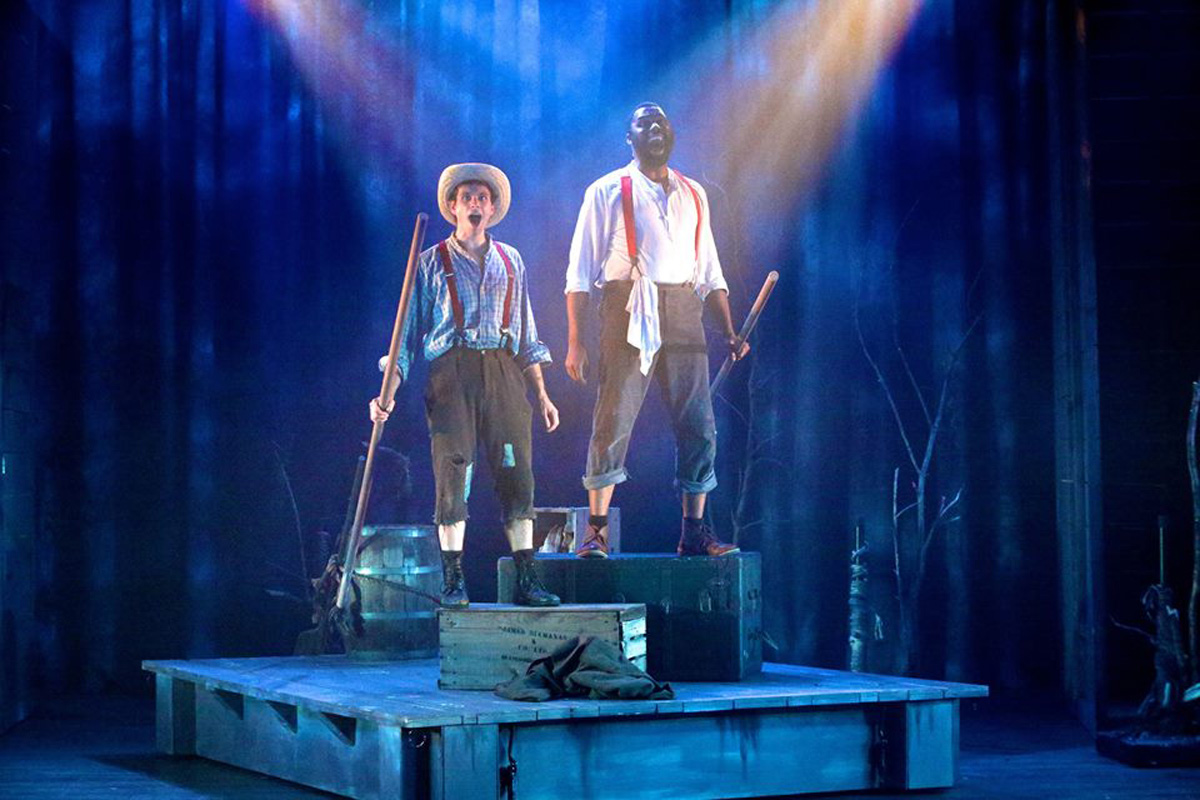 “Big River” at Sharon (CT) Playhouse has energy and panache

Mark Twain’s The Adventures of Huckleberry Finn was first published in 1884, but its story takes place in 1840, 23 years before the Emancipation Proclamation. The musical Big River is an adaptation of the novel centering on Huck’s trip down the Mississippi River helping the runaway slave Jim to find freedom. The book was controversial because it humanizes Jim and was a condemnation of slavery.  The show, book by William Hauptman, closely follows the novel, but despite underlining the thematic elements it is awash in sentimentality and hit-over-the-head preaching. The current interpretation at Sharon Playhouse in Sharon, Connecticut, tells the story but it is an uneven production.

The cast, led by Joseph Allen as Huck and Nicholas Ward as Jim, works hard, but there is some notable miscasting.  A number of the cast members are college students who are interning at Sharon and are obviously very talented, but they are not all age appropriate in their assigned roles.  Huck is 14 years old in the novel; Mr. Allen is in his early 20’s as is Alex Dorf who plays Tom Sawyer.  Huck needs the naïveté of a youngster to make the revelations he experiences more powerful.  This immaturity would also justify the hair-brained schemes that Huck and Tom devise, such as freeing Jim from a locked barn by digging a hole with spoons. Several of the older characters don’t ring true due to the age difference despite the earnestness of the acting.  Mr. Ward is a satisfactory Jim though the pain he must be feeling isn’t as palpable as it should be. The Duke (Thomas Cannizzaro) and the King (Travis Mitchell) are given strong characterizations as they alternate from comic to menacing.

John Simpkins has directed the show with effective staging that minimizes the time between scene shifts, though some of the changes are rather busy and occasionally interfere with the story-telling.  He has created a tone that serves the show.  His actors work hard with gravitas or humor when necessary.  The dance numbers are choreographed by Jennifer Werner and are full of energy and panache.

The score by Roger Miller of “King of the Road” fame is a combination of both country and Broadway music with some gospel thrown in.  You can’t help bouncing your feet and hands in time to some of the rollicking numbers like the opener “Do You Wanna go to Heaven?” and “When the Sun goes Down in the South.”  You may be touched by “River in the Rain” and “Worlds Apart.”  There are a number of good voices but the standout is Jim’s.  Some of the soprano soloists are too shrill making it difficult to listen to them and thereby to understand the lyrics.

The set design by Josh Smith is creative and often suggests various locations with a minimal number of props.  He has selected mostly earth colors, beiges especially, so that the sets remain neutral and the emphasis is on the personnel.   The set is complemented by Ken Wills atmospheric lighting design and Michelle Eden Humphrey’s costumes denote historical time and social class.  Emma Wilk’s sound design is competent though some balance is needed.  Speaking of sound, there are moments when the band drowns out dialogue and/or actors swallow some words.

Big River won the Tony Award for best musical in 1985; not to discredit the show, the competition was not compelling: Grind, Leader of the Pack and Quilters were the other nominated shows.

Despite the flaws, this Big River is a pleasant enough summer show that will probably touch you.