Yes, Barrington Stage has created the most wonderful “Pirates of Penzance” ever 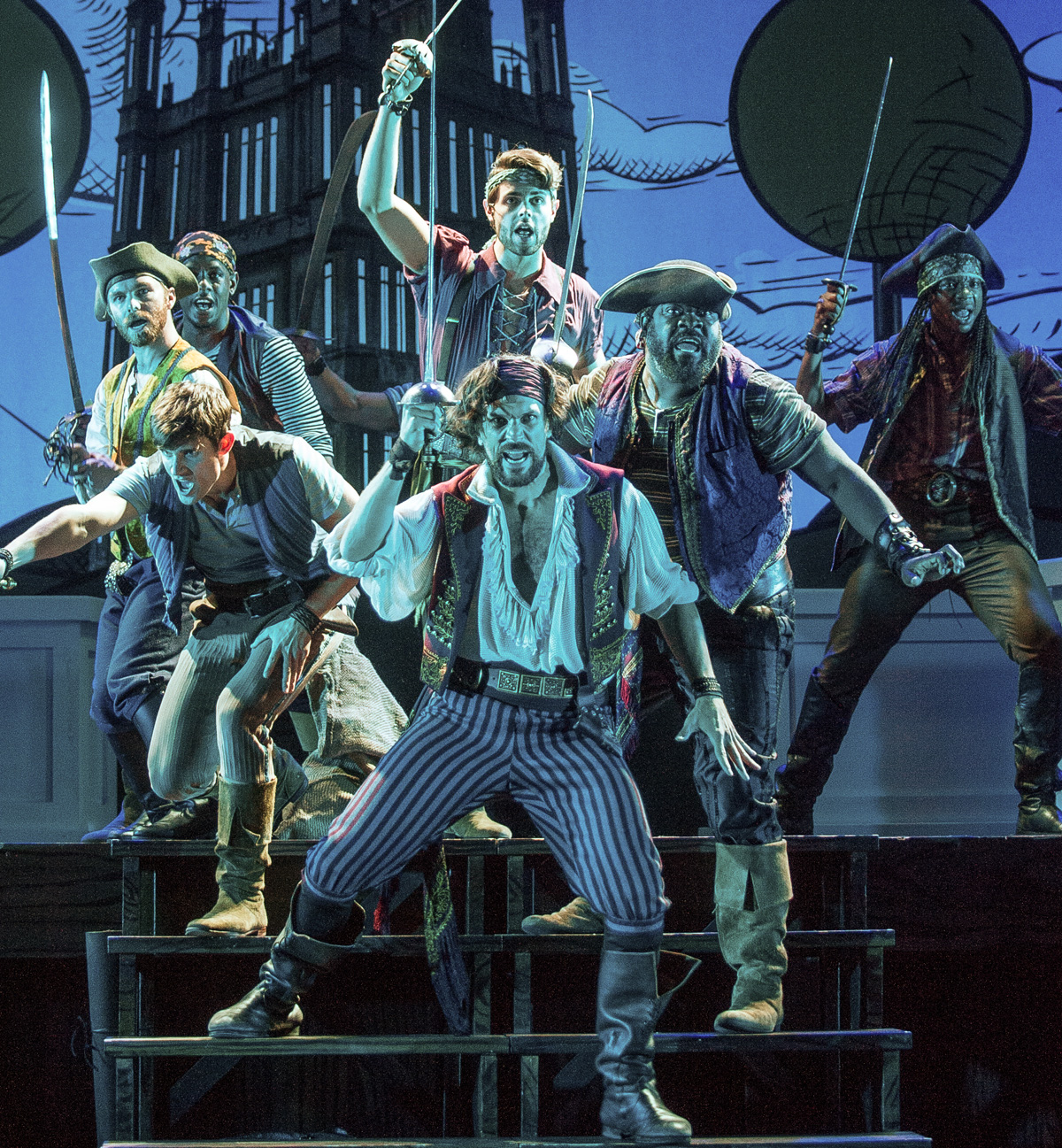 Yes, Barrington Stage has created the most wonderful “Pirates of Penzance” ever

David Garrison as the MajorGeneral. Photo by Kevin Sprague.

Will Swenson & and ensemble in Pirates of Penzance. Photo by Kevin Sprague.

If you are looking for a traditional, D’Oyly Carte staging of The Pirates of Penzance, keep on moving. There is nothing for you to see here. What is on the Main Stage at Barrington Stage Company (BSC) is what you get when you let two award-winning 21st century artists and the perfect cast loose with one of Gilbert & Sullivan’s silliest masterpieces. It is a tidal wave of music and mayhem guaranteed to thrill and entertain all but the stodgiest of Savoyards.

After the colossal international success of their fourth collaboration, H.M.S. Pinafore (1878) – think of it as the Hamilton of the Victorian era – Gilbert & Sullivan were free in Pirates (1879 NYC/1880 London) to be fully themselves artistically. The result is G&S at the top of their form – witty, silly fun set to sublime music. It is also the most American of their operettas in feel, and the only one to premiere in New York instead of London.

In 1980, the centennial of Pirates’ London premiere, the New York Public Theatre, then under the leadership of Joseph Papp, presented this operetta as one of its free summer offerings outdoors on the Delacorte Theatre in Central Park. This production was directed by Wilford Leach, choreographed by Graciela Daniele, and featured new orchestral arrangements by William Elliott, who also served as the musical director. It went on to a successful run on Broadway, winning seven Tony Awards including Best Revival of a Musical, Best Director for Leach, and Best Choreography for Daniele.

While generally reviled by D’Oyly Carte loyalists, what Leach, Daniele, and Elliott did was crack Pirates open for a late 20th century audience by putting the fun back in Gilbert & Sullivan. The D’Oyly Carte productions of Gilbert’s original staging had ossified to the point that the dust was visible on the sets and costumes, and all the importance was placed on the faithful and professional reproduction of Sullivan’s score. Indeed, Elliott’s new orchestrations, the interpolation of dance breaks, and two songs from other G&S operettas (the famous patter song “My Eyes Are Fully Open” from Ruddigore, and “Sorry Her Lot” from H.M.S. Pinafore), and Leach’s decision to cast pop singers rather than those with operatic training, are the chief complaints of the “anti-Papp” brigade.

But 1980 is now 36 years in the past, and that staging is in same danger of ossification as Gilbert’s original. For better or for worse, two video versions of this production exist – a tape of one of the early Central Park performances (notable for featuring the riotous Patricia Routledge as Ruth) and Leach’s 1983 film version starring the entire leading cast with the exception of Routledge, for whom Angela Lansbury subs. From these two sources I have seen fine productions of Pirates where Daniele and Leach’s work is replicated move for move.

So my burning questions as soon as Barrington Stage announced that its Dream Team of director John Rando and choreographer Joshua Bergasse was going to stage Pirates was how they would be able to break free of the “Papp Pirates” and would their version be as much fun?

Well, I am delighted to report that it is even MORE fun! Rando and Bergasse have created their own unique staging on a huge and wonderful set by Beowulf Borritt. Several seats have been removed from the BSC Main Stage to allow for a ramp bisecting the central section of orchestra seating – which is a real gamble when you consider that this is not an enormous house and every seat removed represents a ticket sale lost – from the apex of which, in Act I, rises the mast and rigging of the pirate ship. But this configuration allows for the action to take place all in and around the audience – maidens scamper, pirates creep, and policemen dither all about, so do keep your person and possessions out of the aisles at all times!

I really had not thought it possible to improve on the star turn of Kevin Kline as The Pirate King (I mean, we’re talking about KEVIN KLINE, folks!) but Will Swenson takes the riff that Kline and Leach developed – prior to 1980 the Pirate King was traditionally sung by a stolid middle-aged baritone with no sex appeal, and he certainly didn’t dance! – and made it completely his own. He is charming and sexy, boundlessly athletic and funny as hell.

And he can sing patter! This first time I ever heard the patter song from Ruddigore I was so excited that I forgot to breathe and passed out. Well there was nearly a repeat performance of that moment in Row H when Swenson sang his verse of “My Eyes Are Fully Open.” It is all very well for a man to be handsome and sexy and funny, but if he can sing that particularly rapid unintelligible patter it certainly does matter to ME! Be still my heart!

Scarlett Strallen makes Mabel the truly special bundle of feminine wiles she always should be. I confess to many, many disappointing moments in the theatre when the woman playing Mabel has been revealed to be merely the chick who could hit the high notes. Strallen actually can’t hit some of Mabel’s very highest notes, a fact that Rando and musical director Darren R. Cohen cleverly conceal, but she is the very sparkliest little minx on the stage, and I loved her performance. She did an especially good job with “Sorry Her Lot,” the soprano solo from Pinafore interpolated in 1980 to give Linda Ronstadt something more to do (Mabel doesn’t get a second act solo). It is often omitted, but Rando has retained the first verse only, and Strallen uses her one opportunity alone on stage to convey the real depth of Mabel’s feelings for Frederic. (After all, she will be faithful to her sooth till they are wed, and even after.)

Kyle Dean Massey is a very boyish Frederic, completely overwhelmed by the wonder that is Mabel. In 1980 Rex Smith was a saucer-eyed, golden-curled god of masculine pulchritude – a Tiger Beat cover boy with just a soupçon of sexiness to which he seemed oblivious. In contrast, Massey is just a cute guy, but his interpretation of the role works beautifully, his averageness allowing the bigger personalities surrounding him to shine. And there is nothing average about his singing.

I was wildly excited as soon as I learned that consummate actor David Garrison, was going to be singing Major-General Stanley, and happy when Kevin Sprague’s production photos showed that Jess Goldstein had costumed him in red and had him empty-handed (the 1980 Major-General wore white, carried a little parasol, and was rather too plummy for my taste). Garrison immediately made the role his own, seeming to take pleasure simply in being Major-General Stanley (for it is, it is a glorious thing to be a Major-General!)

Gilbert is generally written off as a misogynist, which is not entirely accurate when you look at characters like Mabel and Yum-Yum, or the staunchly feminist crew in Princess Ida, but Ruth is the epitome of his cruel caricatures of middle-aged women. I cringe during her Act I duets with Frederic. She is also a difficult character to pin down, being a gentle nursey-maid in Act I and a Piratical Maid of All-Work in Act II. Rando enables the delightful Jane Carr to straddle these two aspects of Ruth’s personality believably. He even has her give the ungrateful Frederic a good solid boot in the rump at the end of Act I, which had me cheering her all the way home. Carr is overall, the best Ruth I have ever seen. Neither Lansbury, nor Estelle Parsons who took over from Routledge when the show moved to Broadway, were any good at all. (Yes, this is such a tricky role to play well that it eluded even Angela Lansbury!)

Alex Gibson, who sings the Sargeant of Police looks very, very much like Tony Azito, the tall, slender dancer who inspired Daniele’s choreography for the policemen’s chorus. Azito moved as if he hadn’t a bone in his body, and fortunately his iconic performance is captured on film, but when I saw Gibson my stomach knotted in fear that, after all the wonderful, fresh, new choreography that had gone before, Bergasse was now going to copy Daniele and Gibson was going to treat us to his Tony Azito impression. Yes, a few of Daniele and Azito’s moves snuck in there – some head bobbles and a rotating arm or two – but very few, and they are ones that fit well with the character and the music. But my greatest joy was when Gibson opened his mouth and this beautiful bass voice came out – Azito was a TERRIBLE singer – and I knew right then that Gibson was going to give us an all new Edward (yes, the character has a name.) He and Bergasse came up with some wonderfully idiosyncratic dance moves that earned Gibson a big hand at the curtain call.

Even the peripheral solo roles – Samuel, the Pirate King’s Lieutenant (Philip Boykin), and Kate (Jacqueline Petroccia) and Edith (Lindsay O’Neil), the secondary singing daughters – are cast with delightfully talented actor/singers. I was thrilled when O’Neil got to join with Stallen on the second act finale reprise of the vocal gymnastics of “Poor Wand’ring One.”

Mention must be made of Ryan Winkles exciting fight choreography, which blends seamlessly with Rando and Bergasse’s work. In fact with the pirate chorus it is often hard to tell when they are dancing and when they are fighting. Rando has good fun ultiizing two rows of audience seated to the sides of the stage, with whom the cast frequently interacts to comic effect. There is also the secret of the woman playing Queen Victoria, but I will leave you to discover that for yourself.

In the pit, Musical Director Darren R. Cohen leads a tuneful eight-piece ensemble. His head protruding from a hole in the center of the stage, Cohen gets in on some of the fun too, often being leapt over and even gamely sharing his space with the occasional misplaced player.

There can be no better introduction to Gilbert & Sullivan for anyone, young or old, than this production. You can literally take the whole family and have a whale of a time! As Tom Lehrer said “…one can always count on Gilbert and Sullivan for a rousing finale, full of words and music and signifying – nothing.” The plot is of absolutely no consequence, but if this is your first G&S experience I refer you to the Gilbert & Sullivan Archives for all you could want to know, and more: http://www.gilbertandsullivanarchive.org/pirates/html/index.html