A play about writers of children’s books, “The Stone Witch” premieres at Berkshire Theatre Group 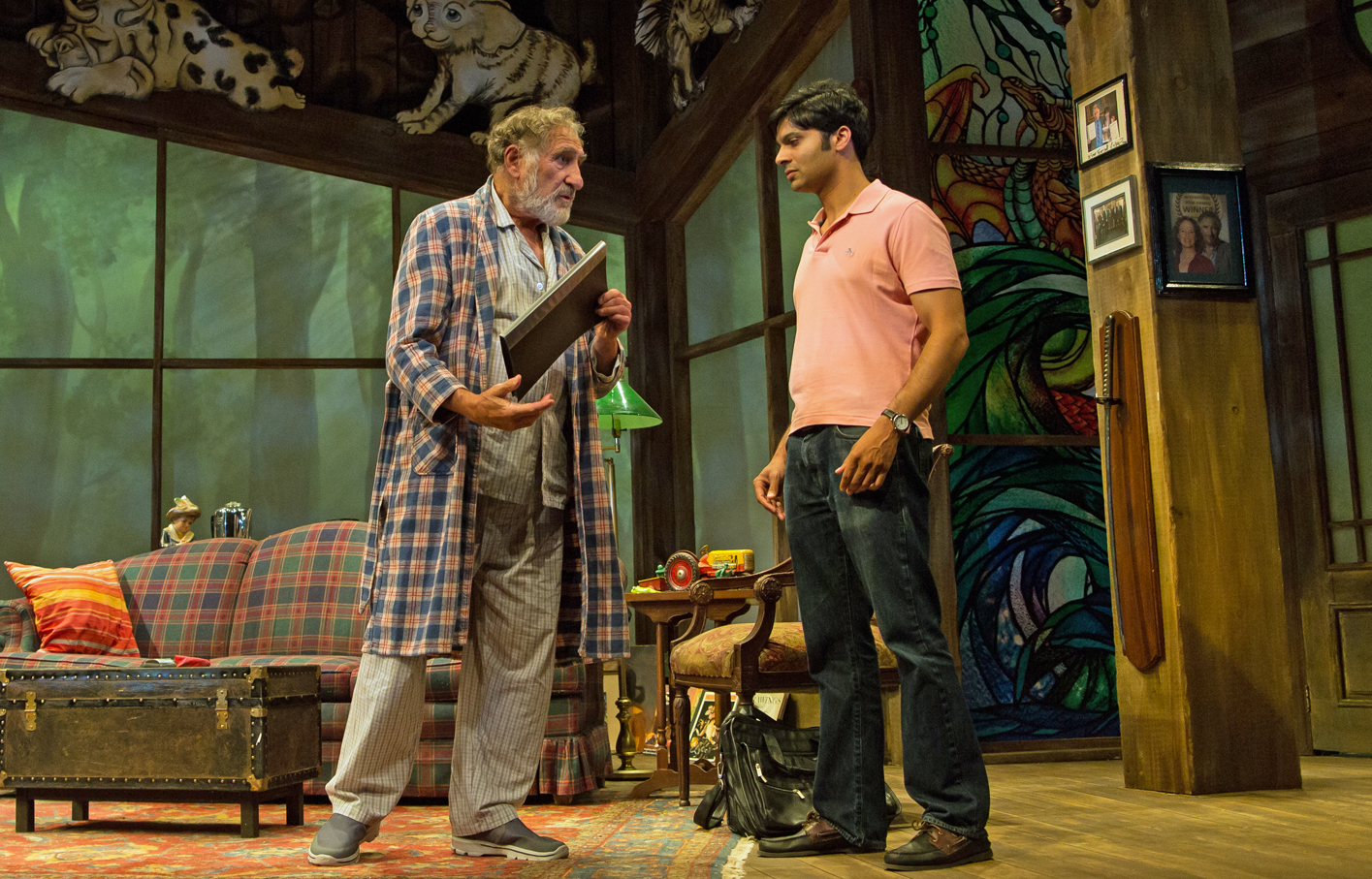 A play about writers of children’s books, “The Stone Witch” premieres at Berkshire Theatre Group

A young, struggling author/artist of children’s books is offered the chance to observe his idol, a legendary figure.  He sees that he can watch a genius at work and, when the time is right, show him his own book with which he has been struggling for years.  Unbeknownst to him, this opportunity is fraught with unknown challenges.  This is the premise of the world premiere of The Stone Witch by Shem Bitterman currently at the Berkshire Theatre Group’s Fitzpatrick Main Stage in Stockbridge, MA.

Peter Chandler (Rupak Ginn) has submitted his book to a powerhouse editor, Claire Forlorni (Kristin Griffith,) who likes his work but also tells him she needs help to motivate fabled author Simon Grindberg (Judd Hirsch) to finish a project that is now 12 years old.  She asks Peter to spend one day a week with Simon.  He accepts the task.

Upon arriving at Simon’s isolated country home, he is confronted by the author in his pajamas and robe and who is at once child-like and dour.  The older man avoids Peter’s suggestion that they work  and instead bounces from nonsensical bantering to fleeting anger to disdain for Peter’s book.  Frustrated, Peter tries various ploys to settle Simon down.  The day finishes in a detente.  Over the next several weeks the young man journeys to the country and then decides to spend his week’s vacation there urging and assisting Simon to finish his book.

As their relationship deepens he sees Simon quickly descend from lucidity into moments of dementia revealing his fear of frightening beasts he believes are living in the dark woods that surround the house.  Are they real or are they sinister figments embedded in his imagination?

The script dramatizes Simon’s subconscious fears illustrating them by the use of grotesque projections that encompass the stage.  They are the most theatrical elements of the show.  The plot also examines the frustrations of creativity.  Simon can’t write; Peter can’t get his book published.  The way they confront these quandaries is a second plot.  The basic narrative and character relationships are not new; they can be found in other plays and novels.  Here they are interesting but not gripping.

Playwright Bitterman and director Zuckerman have collaborated several times.  Here they have allowed several loose ends to occur.  For instance, early in the play Simon has three or four lines about Bella; there are no further references to her in the play.  In a later scene Peter has an angry confrontation with Simon; however, he had not shown his temper earlier (where did it come from?) nor does it return later.  The characters’ back stories are insufficient: Simon is famous; Peter is a young writer; Clair has had an important job for years.  The climactic moments lack tension; they merely occur.  Where the audience should be on the edge of their seats, they simply sit back and watch the events on the stage without a visceral reaction.

The three performers are competent, professional actors.  They give life to their characters but they are restricted by the script and/or director.  Simon’s moments of demented dialogue and behavior are played on the same emotional level as when he is in casual conversation with Peter or Clair.  The fear that he should be experiencing is in the words but not in Hirsch’s emotional reactions, lessening the tension of those scenes.  Ginn and Griffith deliver their lines with intelligence, but they, too, are emotionally restrained.

The set by Yael Pardess is a realistic rendering of a rustic house with large windows through which the surrounding woods are evident.  On a creative note, he has placed Maurice Sendak-like creatures on the rafters of the room staring down at Simon’s work area.   The projections designed by Rasean Davonte Johnson are the most artistic, most beautiful and most frightening part of the show.

It is important for theatres to offer new plays to audiences.  To BTG’s credit they are doing so this season with The Stone Witch and The Bakelite Masterpiece in September.