“Or,” is a 17th Century version of a British sex comedy at Shakespeare & Company 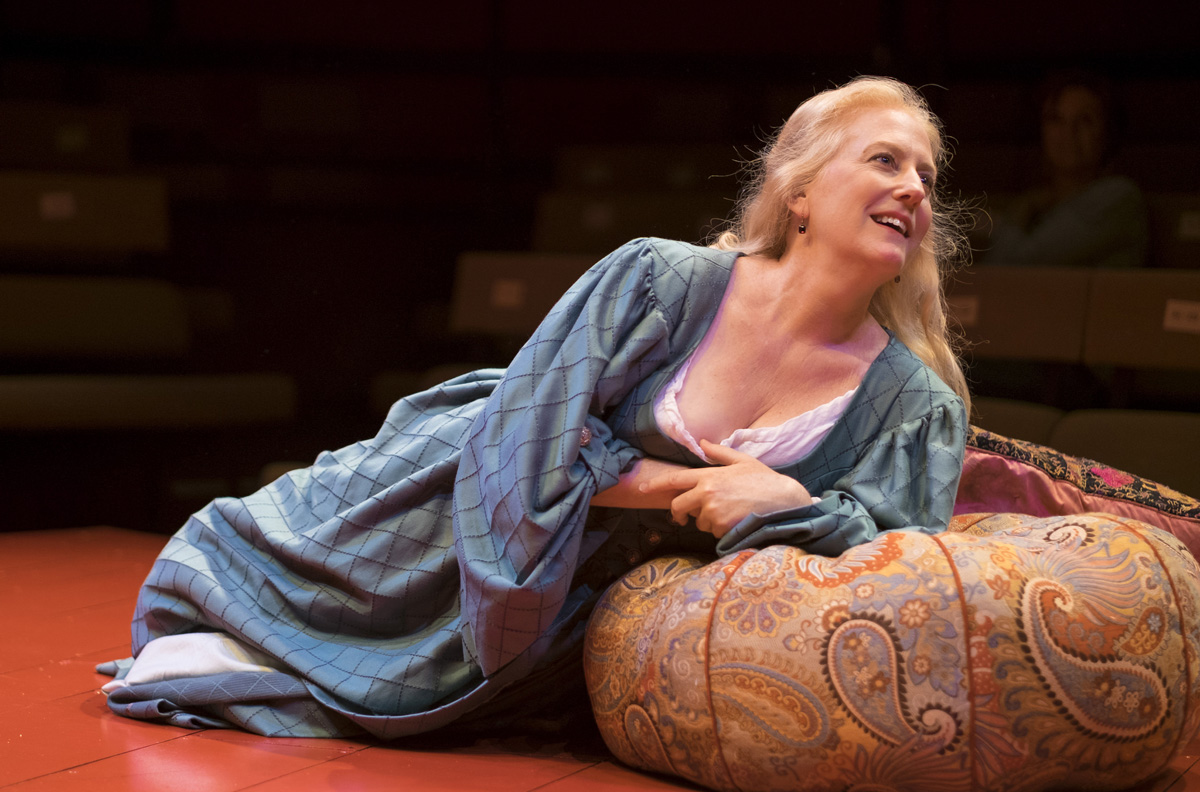 “Or,” is a 17th Century version of a British sex comedy at Shakespeare & Company

Tod Randolph and Allyn Burrows in ‘Or,’ at Shakespeare & Company, 2016. Photo by Ava G. Lindenmaier.

Allyn Burrows and Tod Randolph in ‘Or,’ at Shakespeare & Company, 2016. Photo by Ava G. Lindenmaier.

Allyn Burrows and Tod Randolph in ‘Or,’ at Shakespeare & Company, 2016. Photo by Ava G. Lindenmaier.

“OR,” opens at Shakespeare & Company
Reviewed by Macey Levin

Aphra Behn is considered to be the first professional woman playwright, having been paid for her first play The Forc’d Marriage in 1670. Her plays, novels and poems were criticized for having too many references to sex and gender equality. There is a great deal of conjecture about her life including the possibility that she was never married to a merchant named John Behn. Having had an earlier career as a spy with a dubious reputation makes her a dramatic subject for a fictionalized, hilarious play by Liz Duffy Adams titled simply Or, at Shakespeare & Co.’s Tina Packer Playhouse.

After a prologue and an opening scene that places her in debtor’s prison, the bulk of the play occurs in Behn’s apartments during the course of one night. Several people call on her while she is attempting to write her first play. Through talk about sex, arguments, talk about sex, conversations, talk about sex, displays of wit and a lot of back story, we learn of her adventurous life, but more, we learn of her courage and determination in an age when a woman was not allowed to have a place in the world other than in her home.

Her visitors include King Charles II who has been recently restored to the throne of England and for whom she spied on the Dutch during the second Anglo-Dutch War, the actress Nell Gwynne, a fellow spy William Scot who may also have been working for the Dutch, and the eccentric widow Lady Davenant who produced Behn’s first play. There are several threads of relationships and stories that bind these people together. The recounting of the plot though relatively simple could tend to be convoluted since the interaction of the characters is quite involved. In this production the story is easy to follow because the acting is so wonderful.

Behn is played by one of by S&C’s stalwart actresses, Tod Randolph. She is a powerful presence on stage and handles Behn’s character shadings with expertise and ease. You believe that this is a woman who has led the life ascribed to her. She gets a lot of laughs with what are called throwaway lines… a short sentence that just pops out her mouth.

She is matched by Allyn Burrows, an S&Co. veteran who has returned from Boston and New York theatres after several years hiatus. He plays multiple roles: a cantankerous jailer in the first scene and then he alternates between Charles II and Scot. The two characters are diametrically opposed. The king is comfortably assured of his power and exudes the essence of the privileges afforded him. Scot is of the streets. His life has been difficult given that he is an alcoholic with a tendency toward threatening behavior. Burrows has found the humanity in both of them as well as their laugh lines.

Nehassaiu deGannes is Nell Gwynne, Lady Davenant and Maria, Behn’s housekeeper/maid/friend. She sparkles in all three, very diverse roles. Her Gwynne is a young, bold and confident actress who flaunts her sexuality much to Behn’s and Charles’s delight. Lady Davenant is a larger-than-life, outlandish control freak with huge gestures and a voice that flies up and down and hands that are constantly aflutter. DeGannes is magical in this portrayal. Maria is an aged curmudgeon who knows what’s best for Behn though the writer doesn’t always listen.

Playwright Adams has written a seventeenth century version of those British sex comedies that were so popular in the latter part of the last century like Run for your Wife or Not Now, Darling. There is more than one double entendre and a great deal of wise wit. Though the play takes place in 1670, most of the dialogue is in contemporary jargon, including a number of four-letter words. There are two sequences of dialogue, one at the beginning the other at the end, that are in rhymed couplets. In addition to the spoken communications there is occasional broad physical action resulting, of course, in more laughter.

Director Alice Reagan has a sure hand. She allows the script to tell its story while paying attention to the author’s thematic statements. The actors could have been too big taking the emphasis away from Duffy’s intent to focus on Behn at a time when women were given short shrift until the culture started to evolve and she and others took advantage of the changing times.

This show isn’t for the kids; it is for folks who like to laugh and who prize good theatre.