In Williamstown: 20 years later, “An American Daughter” tackles issues still in the news 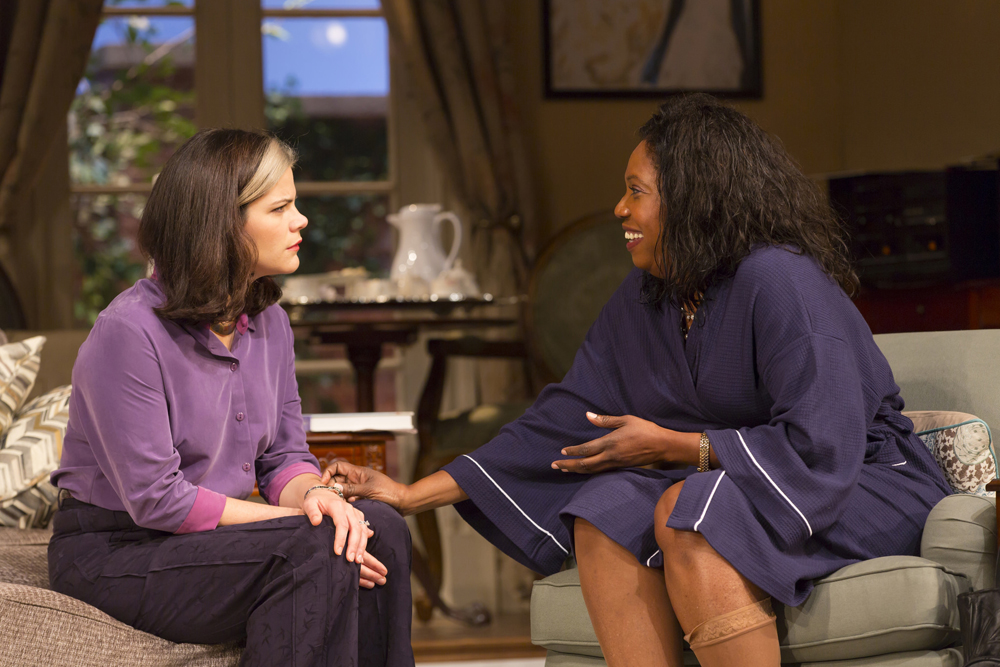 In Williamstown: 20 years later, “An American Daughter” tackles issues still in the news

Deborah Rush is nominated for her work in An American Daughter. Photograph T. Charles Erickson.

Almost twenty years ago Wendy Wasserstein’s An American Daughter was produced by Lincoln Center Theater; it received mostly mixed reviews and had a relatively short run. Not being one of Wasserstein’s major plays i.e. The Heidi Chronicles or The Sisters Rosensweig, it has seldom been revived. The Williamstown Theatre Festival has taken a chance to bring it back in the midst of the current, very ugly presidential campaign. A number of the issues addressed in the play are, regrettably, still with us and, in some cases, exacerbated.

Lyssa Dent Hughes (Diane Davis,) has been nominated to become the next surgeon-general. She is the daughter of Senator Allen Hughes (Richard Poe) from Indiana and is married to Walter Abrahmson (Stephen Kunken,) a PhD. sociologist who is living in his past. Lyssa is well-equipped to fill the position given her background as a crusading physician whose major cause is women’s health. This does seem to be something of a hindrance (sound familiar coming from today’s political arena?)

Walter lets slip the fact that Lyssa ignored a summons to jury duty. The very plausible explanation in light of her professional responsibilities and being the mother of young twin boys is that it was misplaced. A participant in this conversation is an old self-involved, highly conservative friend Morrow McCarthy (Roe Hartrampf.) He is invited to a brunch the next day in Lyssa’s home that is going to be filmed by television commentator Timber Tucker (Jason Danieley) and his crew for a news program. Morrow, not so inadvertently, mentions the jury duty foul-up. When it is brought up in the interview a brouhaha develops which endangers Lyssa’s appointment. In addition, she refers to her mother as “an Indiana housewife” who made ice box cakes and canapes. This results in her being criticized as being condescending. Her “favorable” ratings go down (has this happened recently?) and she is given advice by everyone on how to handle the situation. The best and simplest advice comes from her father’s fourth wife Charlotte “Chubby” Hughes (Deborah Rush) who tells her to recognize the error and, more importantly, protect her family.

Lyssa’s best friend Judith B. Kaufman (Saidah Arrika Ekulona,) an oncologist and specialist on fertility drugs and a black Jewess, is more involved with life and death issues, suggesting a contrast between their situations. Another voice is that of Quincy Quince (Kerry Bishe,), a former student of Walter’s and an author of a strongly feminist book, is also something of a piranha who wants what she wants, which is power and fame.

This play could have been written recently . Many of the topics that arise in various discussions… women’s reproductive health, the glass ceiling, women out-distancing their husbands… are relevant today. Solutions aren’t offered, but the problems are on the table. An interesting and intense relationship is that of the pro-life senator and his pro-choice daughter. The role of the invasive media is also quite familiar. Today it is more inflammatory and corrosive than it was twenty years ago.

The acting and script are strong enough to carry the production through its various relationships and conflicts. Though there are some moments of tentativeness, or lack of actor certainty, primarily by Kunkel and Danieley who grow as the show goes on, the others in the cast have found the strength in their characters to keep the production coherent. Ms. Davis is the spine of the plot and she fulfills her role purposefully and with intelligence as do the Ms. Ekulona and Bishe. Ms. Rush is a wonderful and calculating ditz with some of the funniest lines in the piece. McCarthy and Will Pullen, who plays a spin doctor, also contribute to the circus-like atmosphere surrounding the politics of the nomination.

Director Evan Cabnet has employed an accelerated pace so that the political and philosophical discussions are not overbearing or didactic. This helps the play move directly to its climactic scenes. The staging is also fluid, given a relatively large cast. Each of the characters has his/her own identity. There may be some stereotypical qualities in the writing but they do not distract from the quality of the acting or Wasserstein’s thematic statements.

Derek McLane’s set of a Georgetown living room is highly detailed, complementing the people who live in the house. The lighting design by Ben Stanton unobtrusively sets the tone of the several scenes.

Though the play is twenty-years old it is not stale in light of our current world. We can only hope that in another twenty years Ms. Wasserstein’s absorbing play will be out-of-date because the issues she has broached will no longer exist.