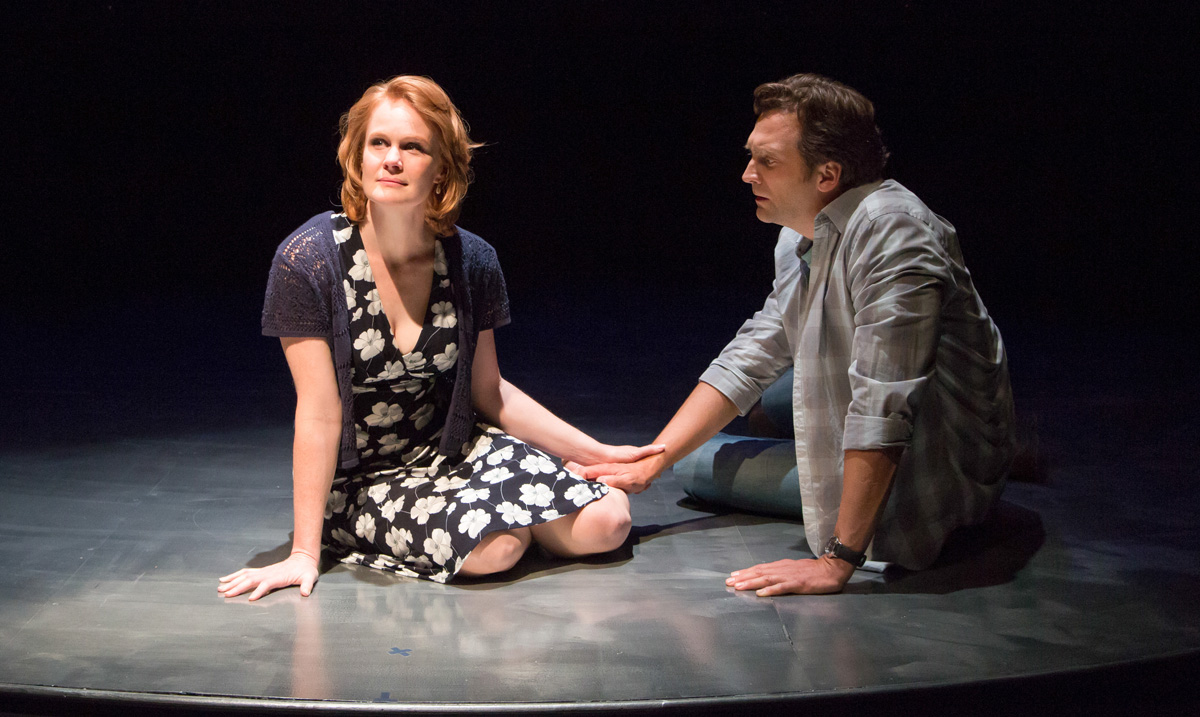 “Constellations” at the Berkshire Theatre Group
Reviewed by Macey Levin

Life is full of serendipity. A chance remark, meeting a stranger, missing a train, making a decision, all contribute to the arc of our lives. We don’t know what is going to happen in the next moment that will redirect us immediately or in the future. We review and dissect our experiences to determine the why of the path we have chosen. This is the core of Nick Payne’s engrossing play Constellations now at Berkshire Theatre Group’s Unicorn Theatre in Stockbridge, MA.

Marianne (Kate Baldwin) and Roland (Graham Rowat) meet at a mutual friend’s barbecue. That moment, like others throughout the script, is played again and again with the actors using different inflections and timing to give each replay a different quality. We follow them through their growing relationship, marriage and separation. Each important moment of their lives together and apart is explored as they contemplate why they are where they are.

Marianne is a cosmologist who facilely refers to string theory, relativity and quantum theory. She says that in a parallel universe everything one does is not always what it seems. A beekeeper, Roland informs her that bees have a strict utilitarian purpose; the workers, drones and queen know their predetermined responsibilities. Their different occupations are a severely opposite to each other but also a description of the two lovers. In addition to their contrasting professional worlds they also have a problem in communication. Or is it that they hear what they want to hear, another of playwright Payne’s thematic statements. To further express the communication content, one of the scenes is performed entirely in sign language, a fitting dramatic complement.

All of Marianne and Roland’s emotional reactions are known by each of us, for we all have been in relationships or situations that that we review and revise in our minds… “I should have said…,” “Why did I…?” “Was that wise…?”

In less deft hands the dialogue could become simply repetitive, but Baldwin and Rowat, married in real life, bring intelligence and nuance to the various moments creating a different tone each time the scene repeats. Even more, they are very human. Each is vulnerable, therefore wary, sometimes sympathetic, sometimes antagonistic. They know their lives are incomplete, but they can’t determine how to align what they want with what is in front of them.

Director Gregg Edelman seamlessly moves the couple from one moment to the next with tenuous physical movements and subtle changes in line delivery. He has them maintain their humanity so that they are always real to us. The production is always advancing when there is the danger of it feeling like treading water because of the repetitious dialogue.

The play takes place on a bare, circular stage… no props, no furniture, just the people. They are surrounded by an upstage scrim with projections of various constellations and minuscule lights above them, suggesting stars in space.

One does not have to know cosmology or beekeeping to be touched by Marianne and Roland.. They are us: human beings trying to live a life hoping they have made the right choices.

Constellations runs through August 27. For tickets call 413-997-4444 or go to www.BerkshireTheatreGroup.org.