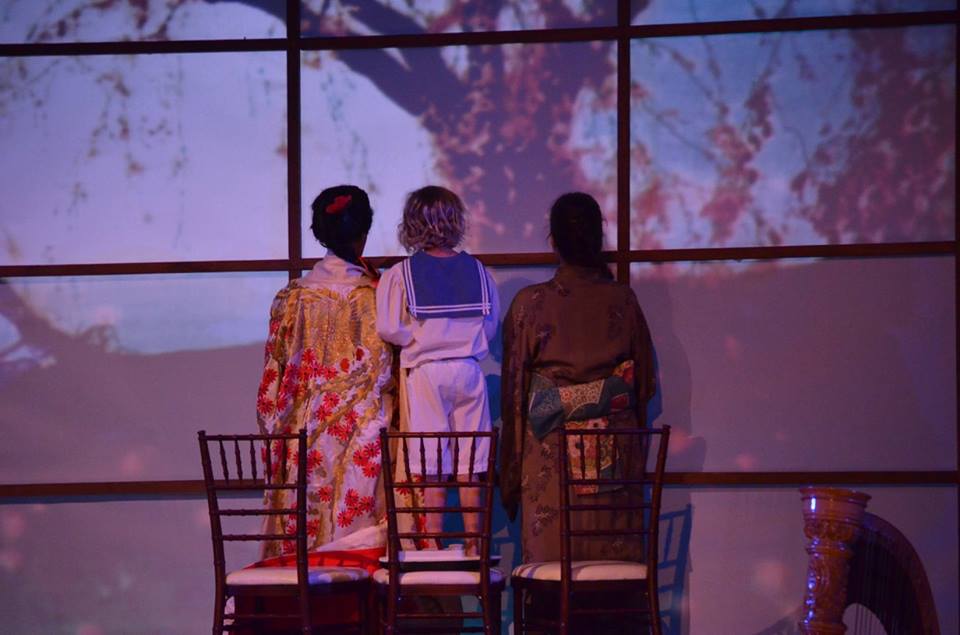 The Poster for Madama Butterfly.

When Alexina Jones founded Hubbard Hall Opera Theater (HHOT) in 2008, one of her goals was to “engage and build rural audiences for opera through offering affordable, intimate, high-quality musical and theatrical performances.” This she achieved immediately when HHOT’s premiere production of Mozart’s Cosi fan tutte started out playing to 85 percent capacity its first few performances, and then it sold out.

This year, which is Jones’ last at Hubbard Hall as she is moving on in her arts management career, 25 people were turned away from the open dress rehearsal of Puccini’s Madama Butterfly that I attended. The Hall only seats 120. A “rural audience” for opera has not only been engaged, they have been enthused. In case you are not sufficiently impressed, Jones is well under 40.

Jones started out producing truncated, comedic, family-friendly operas – although the singers and musicians have always been professionals – on the theory that full-length grand opera might scare off first-time opera-goers. And now they are packing the house for full-length productions of Rigoletto and Madama Butterfly.

If you have never been, Hubbard Hall Center for Arts & Education is a community organization in Cambridge, NY, a medium-sized rural town about 45 minutes north of Williamstown, MA, and 45 minutes east of Saratoga Springs, NY. They own several buildings, but the centerpiece is Hubbard Hall itself. Built in 1878, it is one of the few surviving rural wooden opera houses in the region. Despite the name, these structures were not originally built to house operatic productions, but “the theatre” had such a poor reputation at that time that women and children would not be seen entering one, even if they were somehow allowed in. Nor would any self-respecting community condone having a “theatre” built in their town center. Calling a venue a “lecture hall,” “music hall,” or an “opera house” immediately doubled the size of your prospective audience, which was vital to doing business in a sparsely populated rural area.

Right from the start HHOT has fielded a full orchestra for its productions. This year there are 21 musicians under the baton of Conductor Nathan Troup, situated in between the stage proper and the audience. As is usual at HHOT productions, a ramp wraps around the orchestra, enabling director Michael Sakir to bring his singers down close to the crowd.

Carl Sprague designed the set, which is simplicity itself – the ramp that encloses the orchestra and a backdrop made to look like a large version of the wall in a Japanese “paper house.” This backdrop hangs where the proscenium curtain would be, so all stage action is forced out on to the apron and ramp. But the genius part of this are the projections, which Sprague conceived of and Vaughn designed and created. Sometimes they are full screen projections of ships at sea or falling leaves and petals, other times they are silhouettes of actors behind the drop. At all times they turn a very plain set into a vital part of the action of the opera.

Japan was “opened to the West” by Commodore Perry in July of 1853. By 1885 the Western craze for all things Japanese crested when Gilbert & Sullivan’s The Mikado opened in London. In 1900 Giacomo Puccini saw a production of David Belasco’s one-act play Madame Butterfly – based on an 1898 short story of the same name by John Luther Long which in turn was based partially on stories told to Long by his sister Jennie Correll and partially on the semi-autobiographical 1887 French novel Madame Chrysanthème by Pierre Loti – and he immediately sought the rights. Early in 1901 the composer and his favorite librettists, Luigi Illica and Giuseppe Giacosa, with whom he had previously scored such successes as Manon Lescaut, La Boheme, and Tosca, started work on Madama Butterfly.

The work premiered as an opera in two acts at La Scala in February of 1904, and met with harsh criticism. Puccini reworked it as a three act piece and a highly successful second production was mounted in May of that same year in Brescia, Italy. Puccini made more changes before the American premiere in 1906. In all, there are five versions of Madama Butterfly available for performance, with the final 1907 version being considered the standard. HHOT is presenting the 1904 Brescia version in the original Italian with English supertitles translated by Jones and Amelia Vaughn.

Madama Butterfly is full-blown tragedy in the grand operatic tradition, and it deals with issues of colonialism and the appropriation of culture currently very much in the news. Lt. Benjamin Franklin Pinkerton (Jon Jurgens ) arrives in Nagasaki harbor on the U.S.S. Abraham Lincoln (as if those All-American names aren’t enough, Puccini interpolates strains of The Star Spangled Banner into the score.) There he “buys” a “wife” – a 15-year-old Geisha named Cio-Cio San (Bei-Bei Guan or Jaime Hartzell) who is called Madama Butterfly – from Goro (Christopher Remkus). Selling, actually a better word would be renting, a “wife” to American visitors is a common practice, as Butterfly’s friends and relations make clear at the “marriage ceremony.” Everyone, except the very romantic and naïve Butterfly, understands that this is just a temporary arrangement. Pinkerton is warned by his friend Sharpless (SeungHyeon Baek) that Butterfly is taking this “marriage” very, very seriously, but he chooses not to believe it. Her Uncle, an ordained Buddhist monk referred to as the Bonze (Charles Martin), officially disowns her from the family for converting to Christianity in order to marry Pinkerton. He eventually sails away, unaware that Butterfly is pregnant, and when he returns years later, with his “proper American wife” in tow, and learns of his son Dolore’s (Lena Dolmetsch or Nora Mulligan) existence everyone just assumes that Butterfly will give him to Lt. & Mrs. Pinkerton (Lauren Silberstein) to raise as their own in the United States.

The “othering” and subsequent dehumanizing of the Japanese woman is really the theme of the opera, and this is very much Butterfly’s show. I saw Chinese-born Bei-Bei Guan in the title role, and she is terrific – a wonderful actress as well as a magnificent singer. The other singer performing the role, Jaime Hartzell, is not Asian, which removes something important from the role for me, although I am certain she is as fine a singer as Guan since HHOT always finds superb young talent. In opera one casts the voice, with the body being merely the receptacle which moves the voice around the stage, which is why the issues of diversity in casting don’t obtain here as they do in the theatre. It is wonderful that Guan looks the part to a T, but she shares the stage with the Korean-born SeungHyeon Baek singing the role of the Caucasian Sharpless and many non-Asians and Asians of various ethnicities playing Japanese characters.

Jurgens was suitably reprehensible and self-absorbed as Pinkerton – I had to remind myself that it was improper to “Boo” the villain at the opera! Monica Soto-Gil was heart-breaking as Butterfly’s loyal servant, Suzuki, who clearly loves her mistress and her son, and sticks with them through years of poverty and disgrace.

The other doubled role in this production is that of Butterfly and Pinkerton’s son, Dolore, who is played by Nora Mulligan, 4, and Lena Dolmetsch, 7. I saw Mulligan, a tiny scrap of a child, who did a remarkable job of hitting her marks and cues calmly while surrounded by the tremendous din of professionals singing full-out and that 21-piece orchestra clanging away, sounds I would have found terrifying at that age. I am sure that Dolmetsch, who is the daughter of Jones and her husband Jason Dolmetsch and who is nearly twice Mulligan’s age, does a fine, professional job too.

Whether there are future opera productions at the Hall remains to be seen, but there is a good chance that this is your last chance to see professional opera in this most intimate and unique of settings. There really is nothing like it, and there may never be anything like it again. Reservations, and an early arrival since it is general rather than assigned seating, are highly advisable.

An excerpt from Gail Burns’ 2009 Women’s Times article For the Love of Opera:

This article appeared the same year that two regional opera companies – Berkshire Opera and the Hartford-based Connecticut Opera – closed their doors, while the relatively new simulcast screenings from the Metropolitan Opera were selling out before they were even advertised at local venues like the Mahaiwe Performing Arts Center in Great Barrington.

Our region still offers opportunities to experience opera the old fashioned-way, and interestingly, there are a significant number of women among those bringing live opera to new audiences in rural areas and the downtown regions of once-thriving industrial cities like Hudson.

Among the Impressarie (a new word I’ve coined for these women) is Alexina Jones, whose dream of starting her own opera company was realized in 2008, after she approached the board of Hubbard Hall Projects, a community arts organization based at the only surviving 19th century wooden opera house in Washington County, N.Y., with the idea of staging a small, one-act opera or a recital, and was told to go all the way.

“They said, ‘If you want to stage an opera, stage an opera,’” Jones recalls. The result was the creation of Hubbard Hall Opera Theatre. Their premiere production of Mozart’s Cosi fan tutte in August of 2008 featured a full orchestra and a scaled down cast of five soloists (including Jones as the saucy maidservant, Despina) and no chorus. Neither Jones, nor director Diana Heldman or conductor Richard Giarusso had ever staged a full opera before. The first few nights of the five-show run played to 85 percent capacity. “And then we sold out,” says Jones. “We had people standing in the back of the Hall.”

This summer, the company will present La Tragédie de Carmen, an English language adaptation of Georges Bizet’s classic by Marius Constant, Peter Brook, and Jean-Claude Carrière, August 13-23, with Heldman directing. The performance will be sung in English with supertitles. As Jones is expecting her first child in July, she isn’t planning to appear in this summer’s opera. “I carefully chose a piece that didn’t have a part for me in it so I wouldn’t be jealous,” she says with a laugh. Still in her 20s, Jones is about two decades younger than the other Impressarie, who have founded their opera companies as an outgrowth of their own careers as vocalists and teachers, but her reasoning is similar.

“I could have stayed in the city and fought for a career along with hundreds of other young sopranos, or I could come up here with my husband, have a home and a garden and a baby, and do my own work,” Jones explains. It is a sentiment echoed by her older colleagues who found not only a safe and healthy life for themselves and their families amidst beautiful surroundings, but an area where the facilities, the talent and the audience for opera were readily available.