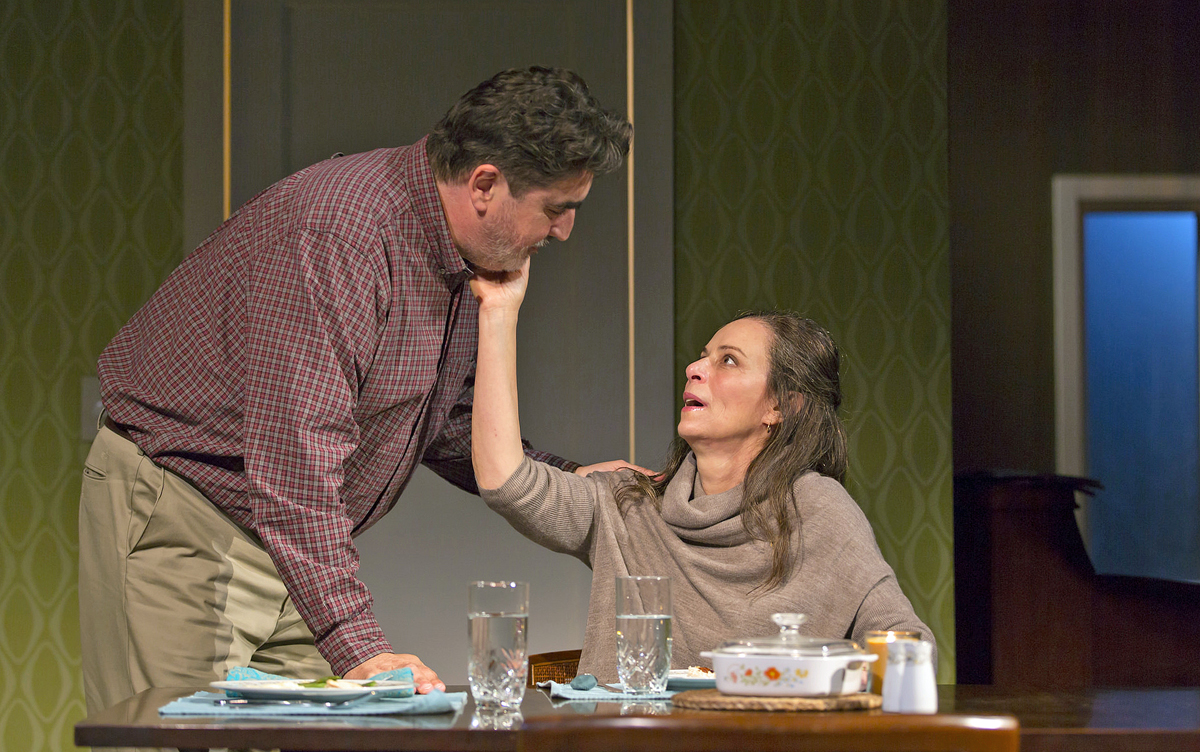 This American premiere of And No More Shall We Part by Australian playwright Tom Holloway is a challenging piece to write about. It offers so much in its content that requires great tolerance and that is played with outstanding theatrical energy and insight.

Pam and Don, middle-age parents of a son and daughter who are out on their own, live a simple and loving life. Pam has had a disease, never identified, for a period of time. Since treatments will no longer help her, she has decided to end her life to save Don and the children the agony of watching her deteriorate into unbearable pain. Told in flashbacks, we see the couple argue about the process of unassisted suicide. He can’t allow her to do it; she insists it is the best thing to do. He wants to be there when she takes the pills; she says he can‘t because that will implicate him in her death. Little by little he reluctantly acquiesces to everything she asks or demands.

Those of us of a certain age have faced, in one way or another, the traumas they are going through. Facing the loss of a loved one is a test of our own strength for it is not an easy realization that one’s life will be severely changed. This is part of Don’s reaction. He does not want Pam to leave him; he decries her actions as being selfish. He tells her to think of what she is doing to the family by taking herself away. To her, it is an act of love. Watching them is heart-rending.

The deep emotional effect of the play is produced by the extraordinary acting of Jane Kaczmarek and Alfred Molina and the sensitive and controlled direction of Anne Kaufmann. Kaczmarek as Pam is steadfast in her acceptance of the decision. Seldom does she give into the painful recognition of her immediate future. Molina’s anger and frustration are thwarted by her strength. Despite the differing attitudes to her imminent death there is obviously profound love; at every moment an intense sense of loss emanates from the stage.

Ms. Kaufmann could have allowed the play to become a maudlin soap opera instead of the overwhelmingly consuming experience it is. The characters have our sympathy not because the actors and director are pandering to our emotions, but because we are watching Pam and Don live their lives through the fourth wall. We sometimes blanch at the pained humanity we see before us, but death is part of life.

The somewhat complicated scenic design by Rachel Hauck is effective, though at times moments of action are hidden from those sitting in the house-right side of the theatre. Matt Frey’s lighting and Brandon Wolcott’s sound design underscore the solemnity, the sweetness or the energy of the various scenes.

This is a weeper. There were sniffles and deep sighs throughout the audience during the running of this 70-minute journey. Despite the starkness of the story and the assault on our hearts, the play is unforgettable.