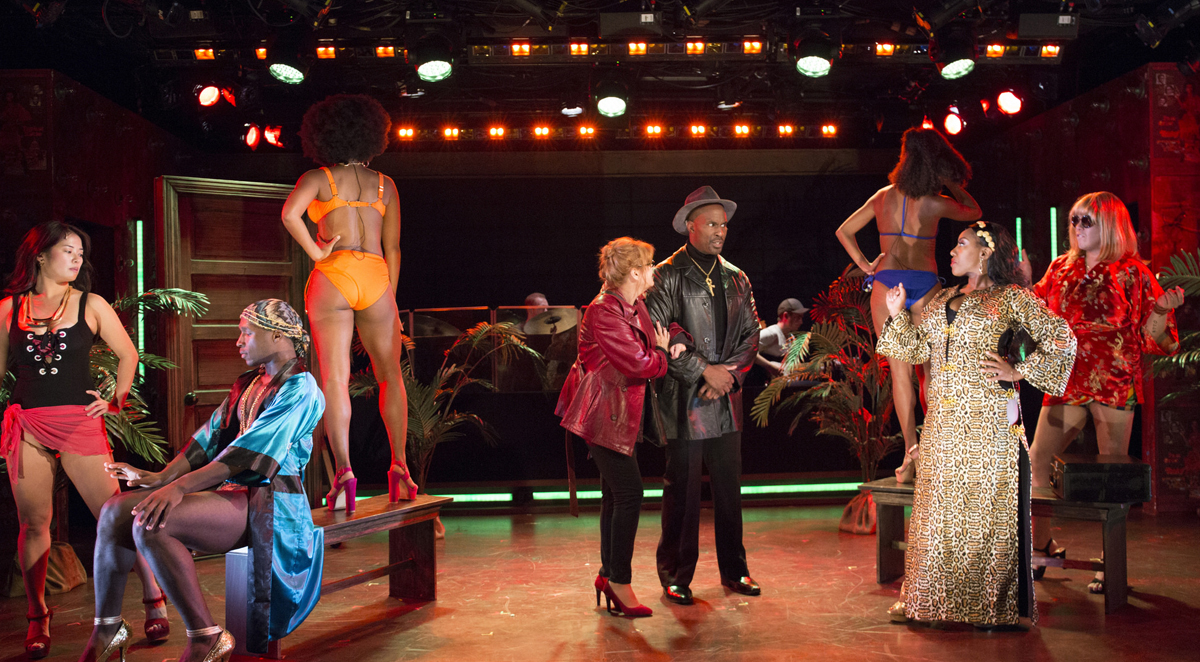 Annie Golden and Jeff McCarthy were both nominated for Broadway Bounty Hunter. Photo by Scott Barrow.

Broadway Bounty Hunter had its world premiere last night at Barrington Stage Company as part of its Musical Theatre Lab (MTL) where Tony-winner William Finn introduces the most promising new musical writers to Berkshire audiences. The exuberant new musical overflowed the stage of the Sydelle and Lee Blatt Performing Arts Center and brought the audience into the world of blaxploitation and martial arts movies of the 1970’s. Curiously, its composer, lyricist and co-book writer Joe Iconis never experienced the arrival of the black hero and Hong Kong chop-socky aesthetic directly: he was not born until 1981, long after the form had been bled dry by the Hollywood film industry. Even so, his ability to turn these formulaic movies into a satirical musical is a wonder.

With Julianne Boyd sitting in the director’s chair, Broadway Bounty Hunter matched the awesome energy level achieved by its earlier mainstage musical Pirates of Penzance directed by John Rando. And in a theatre as intimate as the St. Germain, the intensity of the choreography by Jeffrey Page matched the incredible volume of the musical and vocal sounds from its perfectly cast ensemble. Ensconced in the rear fifth of the stage were the six musicians of the band, the largest in memory for a MTL production. The score is rich with R&B and Funk and not a little of plain old ‘80s Rock ‘n’ Roll.

With those elements in place, Iconis added one more: Broadway, in the person of Annie Golden, an aging actress who gets no respect, and who clings on to her fading identity even as a younger generation tries to replace her. She goes through auditions with an old headshot, determination and an old star-shaped off-Broadway award she received decades ago. (Little does she suspect, at the outset, that it will come in handy later in the show as her secret shuriken throwing star.)

In an unusual move Annie Golden’s character in the musical is also called Annie Golden, as she sets off on an imaginary trip where she tries to find the inner strength she needs to save theatre and realize her true badass identity. In the ice-breaking first minutes of the show we meet the whole cast, and are treated to a upbeat production number, “Spin Those Records,” a tribute to Jukebox musicals.

Then our story actually begins. Having been rejected at audition after audition, Annie meets Shiro Jin (Scott Watanabe), a Kung Fu master with a special assignment for her as a Broadway Bounty Hunter. Soon she is paired up with Lazarus (Alan H. Green) and both are given the assignment to bring back the notorious Mac Roundtree (Jeff McCarthy) who runs a sex and drug operation in Venezuela.

Playing multiple roles are Badia Darha, Anastacia McCleskey, George Salazar, Shannon Tyo and Jason Veasey. While Badia Farha employed every inch of her body to bring her characters loudly to life, Shannon Tyo used her mastery of the twin sais to secure her dominant position as the daughter of sensei Shiro Jin.

With nonstop singing, dancing and kung-fu action spread across a modest sized stage by twelve hyper-active performers, there was not much room (or budget) left for a fancy set. Scenic designer Timothy Mackabee clearly had his creative work cut out for him, and decided on a less-is-more approach. Other than costume hooks and lights on the sidewalls, all the set pieces were movable, including the Venezuela locations which were created with a dozen portable potted palms. A much-used rolling doorway signaled each change of scene as Annie and others passed through it to find themselves in a new room or location. Given the horrific low ceiling in the Blatt Center, the lighting design by Eric Southern accomplished miracles. Nevertheless someone has to address the problem of so much spillover into the audience where the bare lights – no masking at all to reduce the glare – literally become a distraction.

One aspect that is not often mentioned in reviews is the work done behind the scenes by  the orchestrator, in this case music supervisor Charlie Rosen. The songs created by Joe Iconis for Broadway Bounty Hunter are very different from his poco a poco allegro crescendo (little by little faster and louder) cabaret songs. The opening and closing number, “Woman of a Certain Age” worked especially well, and it is the deft orchestration that made this song – and all the others –  into musical statements filled with rich emotion and harmonic complexity. The trumpet work of Nick Frenay also has to be singled out: a true ensemble musician, there was hardly a break long enough for him to lick his chops between notes. In fact, the whole band was simply as tight and well rehearsed as one could ask for.

Any musical includes collaborations across the board, and Bobby Frederick Tilley as the costume designer had the task of adding the final touch of color on stage. Another unsung hero of the production is Ryan Winkles who created the fight choreography, and indeed did it with a wider margin for error than usual, which choreographer Jeffrey Page then wove into the movements on stage.

Broadway Bounty Hunter, like the dozen previous musicals that have been part of Barrington’s MTL program brings to the fore the new songs and concepts that continually renew this most American of theatre forms. It is clear that Barrington Stage has lavished a great deal of energy and resources to give this new musical every advantage going forward. In its present form it is ready to be picked up by an entity such as the Public Theatre, Roundabout or even Chicago’s Goodman, and indeed could become a cash cow in a larger urban city where it would instantly find its audience and run for months or years.

Broadway Bounty Hunter comes as close to a 10 as any musical thus far from the Musical Theatre Lab. And there have been a lot of good ones over the years. Go and enjoy its music, its energy and imagination for yourself.