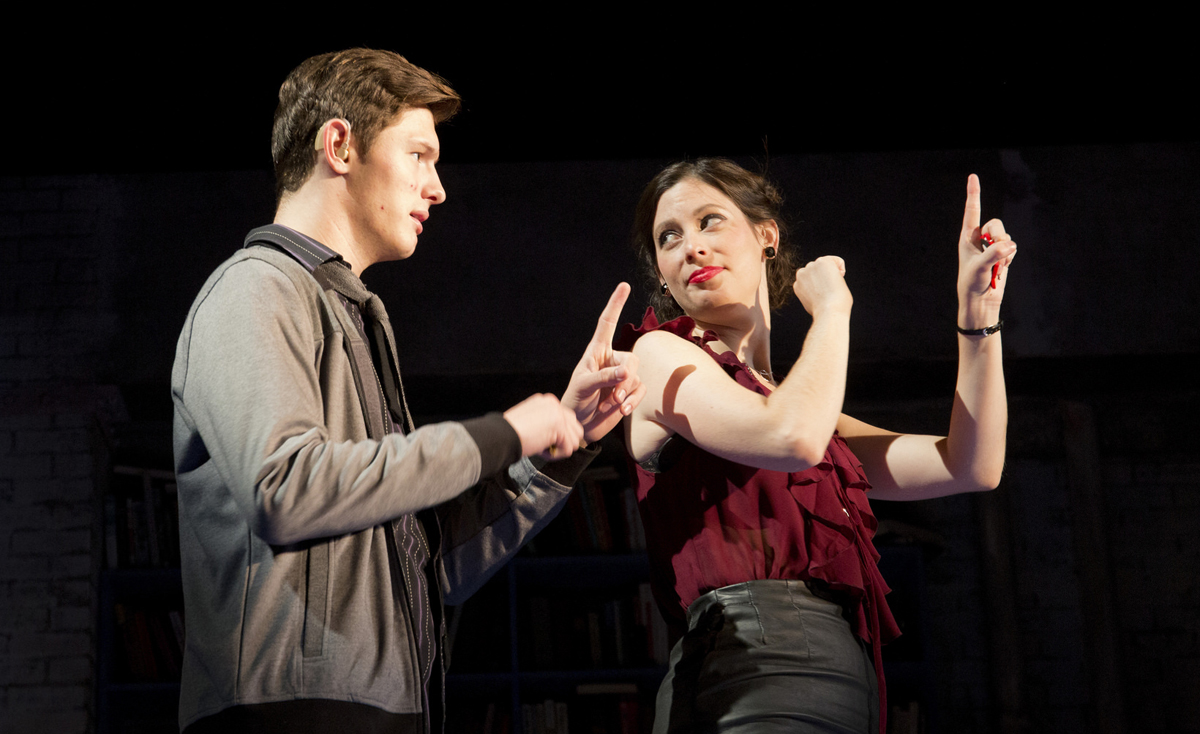 From Nina Raines, “Tribes” explores the world of the deaf at Barrington Stage
Theatre Revuew by Macey Levin

For the deaf, there are four divisions: those born deaf, those who lose their hearing, those who lip read and those who use sign language. Playwright Nina Raines calls them, and other groups, “tribes” in the play of that same name currently at Barrington Stage Company’s Boyd-Quinson Main Stage.

Tribes is an intriguing play with some flaws. The first scenes introduce a highly dysfunctional North London family. The patriarch, Christopher (C. David Johnson,) a self-involved former teacher turned writer, tries to rule his conflicted family with an iron hand and injurious comments. His wife Beth (Deirdre Madigan) argues with him and their two oldest children, who have recently returned to live at home, at the least provocation. Daniel (Miles G. Jackson) is a schizophrenic who has been rejected by a young woman his family abhorred. The daughter Ruth (Justine Salata,) a depressive, believes she is an opera singer with an outstanding future. The youngest son Billy (Joshua Castille) attempts to ameliorate the conflicts with measured success. He has learned to speak by lip-reading his family and the guidance of his mother. Christopher feels that if Billy signs there will be a stigma covering his son. He declares, the deaf “…are the muslims of the handicapped world.”

Into Billy’s life comes Sylvia, the child of deaf parents with whom she signs; she tells him she is slowly losing her hearing. Their initially tenuous relationship moves into a love affair; she helps him get his first ever job as a lip reader for the courts when videotapes do not have audio. When he brings Sylvia home to meet the family, she is subjected to an inquisition led by Christopher, especially when he learns she signs. Various confrontations soon develop between Billy and the family as well as with Sylvia.

Through the first several scenes the play tends to meander through the family’s constant bickering and demeaning comments. What goes on and on could be more concise and still inform the audience of the various relationships and personal problems. Not until the scene that brings Sylvia into the house does the play seem to find its focus. Conversely, at the end the concluding moments are so abrupt the audience is unaware that the play has ended.

Though the stories surrounding the characters have their interesting facets, the core of the play is the view into the life of the deaf. Those of us who are fortunate enough not to have this problem cannot imagine the obstacles and pain the deaf face. One of the most touching moments in the play is when Sylvia tells Billy she has lost the ability to hear her voice. She says she loves to hear her own ironic tones but she can no longer do that; nor can she hear music, another great and intimate loss.

There are the myriad tribes as noted above, but there are others, the obvious one being the family itself. They are educated middle class Jews. Daniel and Ruth are victims of a mental disease; Christopher is an educator and Beth is writing a mystery novel hoping to find a place for herself alongside Agatha Christie. Billy and Sylvia belong to the tribe of the deaf.

The actors employ English accents; most of them are under control but occasionally Daniel and Christopher speak at such a fast clip it is difficult to understand them. When Beth gets angry and hits a high-pitch it is more shrieking than fluent speech. Ironically, it is the two actors who portray the deaf characters – and Castillo is deaf– who are the most articulate.

The set by John McDermott is attractively a-clutter. At center stage there is a huge rectangular kitchen table that is the gathering place for many of the confrontations as well as simpler times. There are crowded bookshelves, cabinets and other appurtenances that suggest the mental state of the various inhabitants. Philip S. Rosenberg’s lighting, especially at the ends of scenes, is beautifully atmospheric. There are projections of surtitles (the conversation when characters are signing or having inner monologues,) sound waves and other mood-enhancing visuals.

Director Jenn Thompson moves the play at a nice pace when the script allows her to do so. The production is effectively staged and character interpretations, other than some speech failings, are vivid and honest.

Despite the problems, none of them ruinous, Tribes has much to offer an empathetic and thoughtful audience.