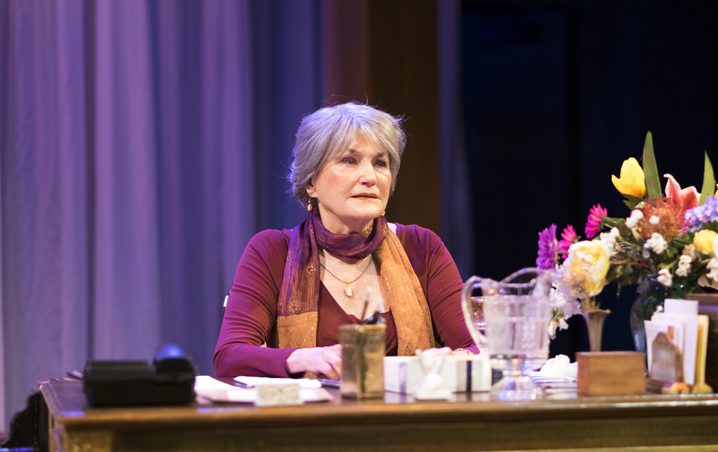 After a terrific season of beautifully acted provocative plays, Shakespeare & Co. ends their summer season on a different note. Sotto Voce by Nilo Cruz is a very long ninety-minute play filled with repetition and redundancy and a plot that winds around itself rather than building a direct arc to a theatrically satisfactory conclusion.

Playwright Cruz uses the doomed MS St. Louis, a ship transporting Jewish refugees in 1939 that was refused entry by Cuba and the United States, as a starting point. The play then focuses on the relationship between a young Cuban-Jewish writing student, Saquiel Rafaeli (Jaime Carrillo,) and a reclusive aging novelist, Bernadette Kahn (Annette Miller,) whose lover, Ariel Strauss, was on the St. Louis and who was whisked to a death camp when the ship returned to Europe.

Saquiel stalks her by telephone, email and standing outside her apartment building staring at her windows. He wants to see her so that he may get information about her late lover. His plan is to write of Strauss’s experiences and present the paper to a conference studying the St. Louis. Bernadette hangs up on him, and responds to his emails tersely demanding he stop writing her. But he persists. Her Colombian cleaning woman/aide Lucila (Evelyn Howe) would prefer Bernadette meet with him. Using a ploy of sending Bernadette flowers, Saquiel first encounters Lucila and a romantic relationship starts to evolve.

The audience is taken into Bernadette’s fantasy world as she imagines Saquiel as a surrogate for Ariel. At this point the play deteriorates into melodrama as Bernadette has several internal monologues which contain interesting information and insights to her life. They are given highly emotional deliveries but they would be more dramatically effective if they were simpler. Some of the speeches, indeed, some of the scenes, have a lyrical quality to them creating beautiful images. But theatre is more than the words and pictures.

In addition to Cruz’s script, director Daniel Gidron has placed much of the acting that seesaws from high-pitched to almost monotone. The several scenes when the myriad email messages are voiced are stultifying in their repetition and uniformity of delivery. Though this is in the script it doesn’t help Miller and Carrillo, though they try to vary their responses. The actors have been given an old hat plot, other than the situation surrounding the St. Louis, to work with. It has all been done before.

S&C should be thanked for bringing to the Berkshires such wonderful productions as The Taming, Ugly Lies the Bone, Cry “Havoc,” The Merchant of Venice, Emperor of the Moon and Or,.

Though Sotto Voce is an ambitious choice, it does not rise to the level of the previous offerings.