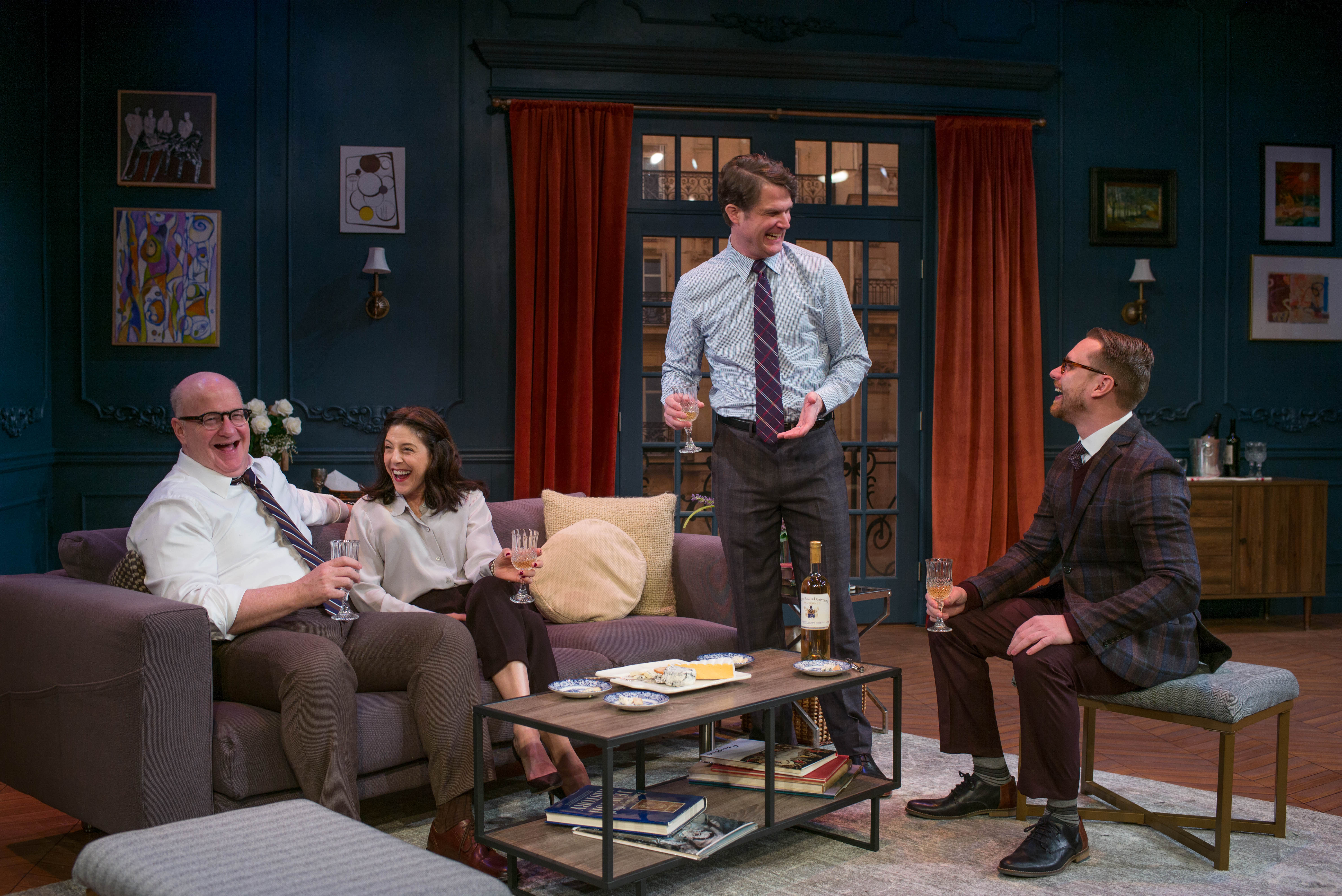 In the Paris Time playbill, Production Dramaturge Teresa Campbell quotes an article from The Washington Post: “France is home to the largest Jewish community in Europe, and its most troubled. A wave of anti-Semitic violence in recent years has shaken Jews in the country to the point where growing numbers no longer see a future here…In 2015, approximately 8,000 French Jews abandoned France for Israel–a record number that has grown with each passing year.”

Not only does this virulent anti-Semitism bear chilling parallels to the roundup and extermination of European (including Parisian) Jews circa World War II, it is sadly reminiscent of U.S. brutality during that time, when Japanese-Americans were forced to live in internment camps. Today, not only in Europe, but in the United States, the steady rise of xenophobia and related hate crimes against those who are “different” should serve as a warning of what happens when the government looks the other way, or even, some would say, cultivates, violent acts that stem from bigotry.

Playwright Steven Peterson takes a hard look at contemporary French anti-Semitism in Paris Time, a world premiere currently at Albany’s Capital Repertory Theatre. Charlie (Marcel Jeannin), an American executive working in his company’s Paris branch, and his wife, Deborah (Kelly Wolf), an attorney who has put her career on hold to live abroad with Charlie, are facing a marital crisis. Reina (Jenny Ashman), a young Jewish woman who works for Charlie’s company, becomes a target of several acts of pointedly anti-Semitic vandalism committed by someone who clearly works for the same corporation. Deborah, who is also Jewish, becomes concerned for Reina’s safety, and urges Charlie to take steps to confront the vandals.

Charlie’s boss, Martin (Wally Dunn), has come to Paris for a company conference. He politely expresses sympathy for Reina’s troubles, but forbids Charlie from going against company policy by becoming involved in the politically charged situation. Aghast that Charlie will not come to Raina’s aid, Deborah decides to take matters into her own hands with the assistance of Phillipe (Tom Templeton), one of Charlie’s French employees who has become a family friend.

Never did I sense the slightest chemistry, or even a connection, between Jeannin and Wolf. This is a big distraction that sucks much of the suspense from the play, because there is always chemistry between people who have been married for years–the chemistry may not be about sexual desire, but when two people know each other intimately, even when they are disappointed in or angry with each other, they’ve established a vocabulary of nonverbal cues, and even friction creates a spark. I don’t feel the actors are at fault here. There is something unfinished about Peterson’s script. I simply could not believe that Deborah was a lawyer. Wolf, an accomplished actress with a quirky youthful voice that I know I’d find charming in other contexts, presented a Deborah who, though determined, was just short of being deferential. She really didn’t have a lot of leeway with Peterson’s dialogue. At one point she commented about a form of communication, “That’s what we used to do at the law office.” I can’t imagine an attorney uttering such a line…a young secretary or an intern perhaps, but not a middle-aged attorney. Her way of taking matters into her own hands involves a forgery that she commits without a second thought. Again, I cannot imagine an attorney doing such a thing. Perhaps Peterson would have created a believable Deborah if she were a former politician or an editor.

Jeannin is well cast as Charlie, but we never experience the crucial pivot point where he grasps the reins of the crisis. I think the dialogue as well as the structure of Paris Time deprives him of the opportunity, and thus deprives the audience of experiencing his metamorphosis into maturity.

The three other characters are more fully realized and satisfying. Wally Dunn is a solid Martin, at turns charming and exceedingly unpleasant, always a pleasure to watch. I was disappointed with a moment in the play when he twists Charlie’s arm behind his back and holds it there as Charlie writhes in pain. That seemed completely out of character–again, not the actor’s fault. Dunn is a skilled enough actor to transmit his ruthless side without such a trick, and I wish Peterson (or was it director Gordon Greenberg?) had not resorted to that.

Jenny Ashman’s Reina is outstanding, her strengths, fears, and self-assurance all parts of a multifaceted, complex character who may be victimized, but is nobody’s victim. Tom Templeton is a nearly perfect Philippe, a dashing, seductive Frenchman who is accustomed to getting what he wants.

Gordon Greenberg’s direction was skillful, witty, and well paced, and I would love to see what he’d do with a refined script of Paris Time. Paul Tate dePoo III’s set is a feast of forest green with burgundy accents, contemporary yet old-world elegant. Tristan Raines’s costumes, for the most part, suited the characters well, and Rob Denton’s lighting accentuated the action nicely. I also applaud David Thomas’s sound design, with one small exception. Charlie’s cell phone rings intermittently throughout the play, and by “rings,” I mean the old-fashioned kind we associate with land lines. I know a few people who’ve chosen that ring tone, but it’s startling and distracting in the play. I kept looking around for a table phone. Something tells me that corporate Charlie would choose another ringtone altogether.

In her curtain speech Producing Artistic Director Maggie Mancinelli-Cahill noted that the playwright is still working on Paris Time. That pleases me, because Peterson has an important message to convey, and I would be delighted to see this play in its next incarnation.