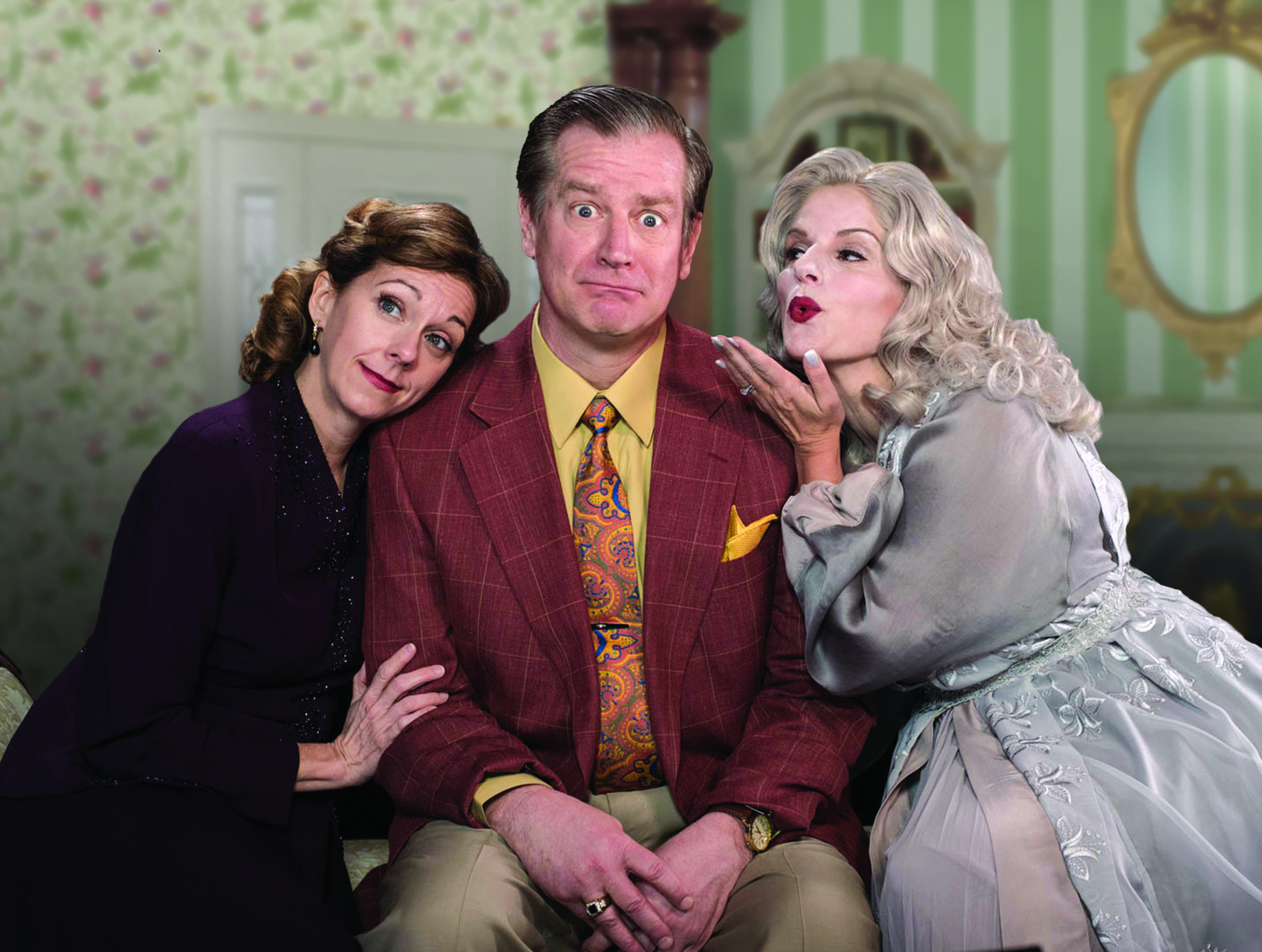 Written as a soul soother for his beloved England, which was recovering from The Blitz and devastated by the continuing casualties of World War II, Noël Coward’s Blithe Spirit was a rip-roaring success. From its first performance on London’s West End in 1941 (where it ran for a record-breaking 1,997 performances), through today, Coward’s funny play about death remains very popular and frequently produced.

Charles Condomine (Gary Lindemann), a novelist preparing research for a book about spiritualism, decides to host a séance (a ritual for communicating with the dead) with the medium Madame Arcati (Eileen Schuyler). He and his wife Ruth (Brenny Rabine) invite friends Dr. and Mrs. Bradman (John Romeo and Elisabeth Henry) to join them for what they’re certain will be a most entertaining evening. During Madame Arcati’s séance, she inadvertently summons Condomine’s first wife, Elvira (Yvonne Perry), who had died seven years earlier.

Only Charles is able to see and hear Elvira, which, of course, gives him the appearance of a madman, as he chats, argues, and spars with something invisible. Maggie Mancinelli-Cahill deftly directs the orderly chaos with a great knack for pacing and choreographing some wildly amusing concurrent exchanges between Charles and Ruth, and Charles and Elvira. Throughout, the Condomines’ clumsy housemaid Edith (the hilarious Kelsey Torstveit) navigates each scene like a puppy trying desperately to please without the slightest inkling how.

The role of Madame Arcati has inherent pitfalls. A grand, eccentric role, actors often fall into the trap of playing her as a caricature; I’ve know of productions where men in drag have played the role. Eileen Schuyler, to my mind, embodied her to perfection. She is a down-to-earth Englishwoman in sensible shoes who is entirely comfortable in her unusual calling. This is essential for Blithe Spirit’s humor: that a real human being creates the pandemonium. Schuyler gets it, and proves a superb anchor for the entire production.

The local actors who comprise the rest of the cast are a talented bunch, yet I didn’t feel that all of them fared quite as well. John Romeo mugged and gesticulated whenever other actors had dialogue that excluded him, leaving me with the thought that he was doing nothing so much as trying to call attention to himself. It is an actor’s job to listen, and the rest of the ensemble was very good at that, including Elisabeth Henry, who was lovely, and elegant. Gary Lindemann has a pleasant presence, but he seemed to lack energy, even as Charles was in dire straits.

I’ve enjoyed watching Brenny Rabine in a variety of plays. She is a gifted, accomplished, generous actress, and she physicalized Ruth beautifully. Unfortunately, her English accent wasn’t on target. Her voice was rather nasal, her words over-enunciated, and I often couldn’t understand what she was saying. Yvonne Perry looked lovely and appropriately otherworldly as Elvira, but her accent drifted back and forth between English and standard American. She had some very funny moments when she tossed objects, like a single rose or oranges from a bowl, at others. Several times she twirled center stage, and this looked awkward when (I assume) the movement should have been lighthearted and celebratory.

The technical side of this production was top-drawer. Brian Prather’s set was sumptuous. Travis McHale’s lighting design and Rider Q.Stanton’s sound design were deliciously creepy and downright fun. The costumes by Howard Tvsi Kaplan were expertly executed, and I loved the sly wink in his transformation of Ruth toward the end of the play.

Opening night includes live music from Zan Strumfeld in the café at 6:30 p.m., and complimentary post-show champagne and dessert from Bella Napoli Bakery. The Chef’s Table performance, on Tuesday, April 17, includes live Noël Coward numbers from Songs to Amuse (Byron Nilsson and Malcolm Kogut), and complimentary hors d’oeuvres for ticketholders from Yono’s/dp An American Brasserie, in the lobby, beginning at 6:30 p.m.

Complimentary tarot card and psychometry readings will be available to ticketholders prior to the April 13, April 20, April 27, and May 4performances from 6:30–7:45 p.m.

The Sunday, April 29 matinee is preceded by a Behind-the-Scenes event, which features complimentary light breakfast fare for ticketholders, and discussion led by theREP’s Producing Artistic Director Maggie Mancinelli-Cahill. Food service begins at 12:30 p.m., with the presentation following from 1–1:30 p.m.