REVIEW: “Mamma Mia!” at the Mac-Haydn 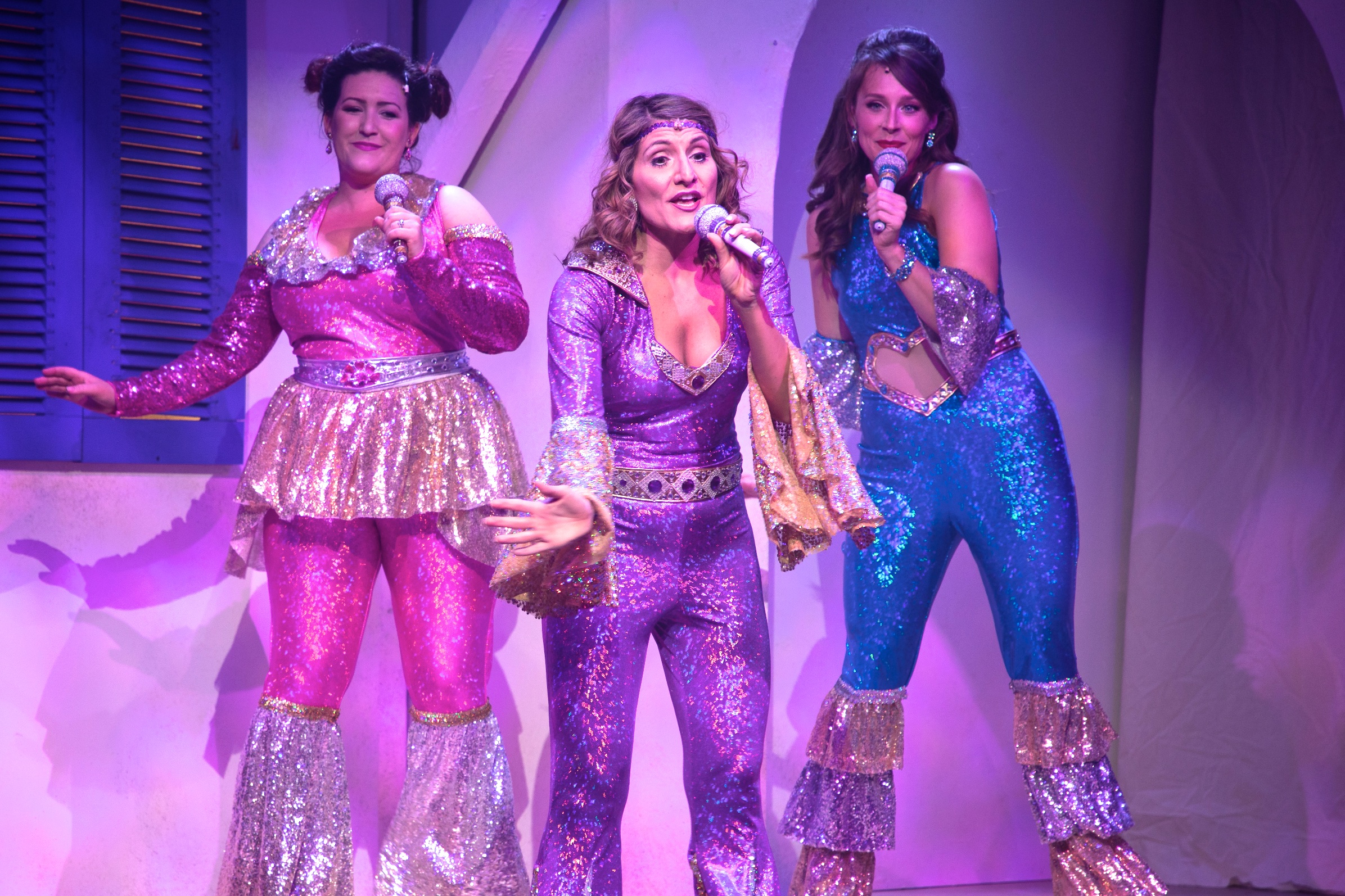 REVIEW: “Mamma Mia!” at the Mac-Haydn

The local go-to venue for big, splashy summer musicals is usually Chatham’s Mac-Haydn Theatre.  The tiny stage is  characteristically populated with dozens of talented young singers/dancers/actors, energetic and beautifully costumed.   However, the latest production, Mamma Mia!, despite showcasing all the usual ingredients, is largely a disappointment.

Part of the problem may be temporary.  Thursday’s opening matinee was delayed by twenty minutes because of a glitch in the sound system, which plagued the production throughout.  Those of us seated in the back of the nosebleed section (#4) missed much of what the actors were saying because the amplification malfunctioned or the orchestra, supposedly playing under their dialogue, overpowered them.  There were other times when even the singers were difficult to hear as the music overwhelmed their voices.  Clearly something was amiss, and one can assume a fix will be found.

But there were other difficulties that are not so easily corrected.  The direction and choreography (by Bryan Knowlton) tends to be repetitive, bordering on tiresome, as the speaking performers face away from each other, and the dancers continually gyrate in concentric circles. At random moments the chorus comes running in from the aisles to add a dance to a scene that feels as though it would have been more effective if it had been a personal interaction between the main characters.  Or we hear the chorus singing offstage, either live or perhaps recorded, supporting the singers onstage—which defies credulity.

Speaking of credulity, Mamma Mia! is a jukebox musical, meaning that it contains songs and lyrics that have been previously written and recorded by popular artists:  in this case Benny Andersson and Bjorn Ulvaeus, former members of the singing group ABBA.  This Swedish pop group was formed in 1972 and for ten years they were among the best-selling vocalists of all time.  Written by British playwright Catherine Johnson, based on the story Buena Sera, Mrs. Campbell by Dennis Norden, Mamma Mia! presents a challenge, as do all musicals of this type:  how to find a way to incorporate the songs within a plot for which they were not written.  Beginning with Rodgers and Hammerstein’s ground-breaking  Oklahoma (1943), song and dance numbers have been integrated into the plot—the so-called book musical.  But jukebox musicals have to work hard to accomplish this.

The plot of Mamma Mia! is very thin:  Sophie (Kelly Gabrielle Murphy), a young woman about to get married, is living with her mother (Betsy Padamonsky), an innkeeper, on a Greek island.  She would like her father to walk her down the aisle but since her mother, never married, won’t reveal his identity, Sophie secretly invites three likely suspects whose names she finds in her Mom’s diary:  Harry Bright (Steve Hassmer), Bill Austin (Colin Pritchard), and Sam Carmichael (Gabe Belyeu).  Somehow this gets sorted out in the second act.  But how can twenty-two songs, most of them wildly popular stand-alone pieces, fit into this plot?  They can’t, at least not believably.  The play strains credulity in many ways.  Yet Mamma Mia!, brimming with irresistible pop songs, ran for 14 years on Broadway beginning in 2001, and is still running on London’s West End and in productions throughout the world.  Not to mention a movie (2008) with a sequel soon to hit local screens.

The Mac-Haydn production’s main characters are all played by accomplished actors with trained voices.  Murphy’s sweet singing and winning smile go a long way towards endearing this young woman to the audience, to her fiancé Sky (Gino Cardoni), and to her prospective fathers.  We root for her as she gains in confidence and self-awareness.  As her mother, Padamonsky plays a tough woman who chooses to bring up her daughter alone (none of the three men in her life are even aware that they may have fathered a daughter) on an island where help is in short supply.  Years before the Me Too movement, this musical emphasizes female empowerment and friendship.  Men are peripheral. Ultimately, it doesn’t seem to matter which of the candidates is the actual father.  Padamonsky, surprised by the appearance of the three former lovers she hasn’t seen for twenty years, establishes a distinct relationship with each of them, both in song and in dialogue.  Hassmer’s uptight Brit is fine, especially in his duet with Donna (“Our Last Summer”), and Belyeu’s scenes with both Sophie and her Mom are moving and authentic.

Donna has invited to the wedding two old friends, members of her former girl group.  From the moment they arrive, they enliven the atmosphere, determined to cheer her up and to have a good time themselves.  Madison Stratton is wonderful as Tanya, Donna’s beautiful and sexy friend, who is very much aware of her power over men, while Rosie (Erin Spears Ledford), not as successful at seduction, behaves like a bull in a china shop as she begs Bill to “Take a Chance on Her.” Both Ledford and Pritchard sparkle in this scene—the funniest in the play—while the song, the action, and the direction finally mesh perfectly.

Kudos to Bethany Marx on her fabulous, ever-changing costumes!  From the tight, glittering Dancing Queen get-ups to Sophie’s lovely wedding gown and everything in between, Marx’s contributions to this musical are sensational.  Kevin Gleason’s set, in pastel blue and white, with sand-colored tiles on the stage floor and white paper lanterns for the wedding evoke the atmosphere of a Greek island.

The highlight of the performance, at least for this reviewer, was the curtain call, as the three “fathers,” along with Donna and her friends, dressed to the hilt like ABBA in their heyday, reprise Dancing Queen.  They were joined by the entire company and a dancing audience, seemingly happy to overlook or forget the challenges to the theatre posed, but not quite met, by this production of Mamma Mia!.

Running Time:  two and a half hours, including intermission; The Mac-Haydn Theatre, 1925 Route 203, Chatham, NY; Wednesdays (second and third weeks only) through Sundays from 7/5; closing 7/22.