REVIEW: “The Mousetrap” at The Theater Barn 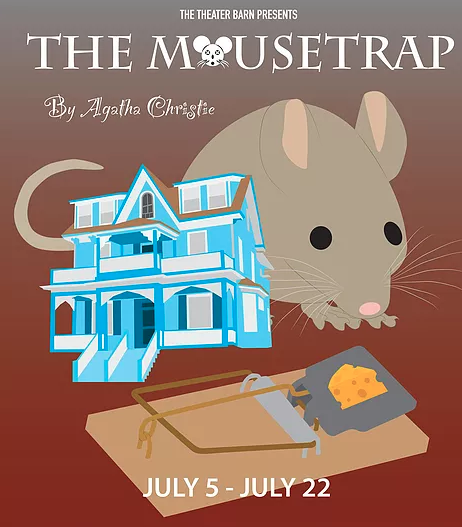 REVIEW: “The Mousetrap” at The Theater Barn

The original London production of The Mousetrap, which opened in 1952, is STILL running; and there are endless amateur stagings every year all around the world. But if you’ve managed never to see it, this production at The Theater Barn is your opportunity to enjoy a fine mounting of this classic whodunnit.

I am slightly puzzled why this one, out of all of Dame Agatha Christie’s plays, should be the perennial favorite, but there is no arguing with the facts. People love this play.

The police phone to say that Detective Sergeant Trotter (Patrick Scholl) is about to arrive to question everyone in the house about a murder up in London, which is connected to the terrible abuse of three young children at a farm nearby Monkswell Manor about fifteen years earlier. One child died from the beating, but a brother and sister, now in their early 20s, survived.

But shortly after Trotter’s arrival – on skis – one of the guests is murdered and it is obvious that someone in the house is the murderer.

Reviewers and attendees are sworn to secrecy about the play’s surprise twist ending, although after 66 years the secret has leaked out. Wikipedia gives the plot in its entirety, but I advise buying a ticket and seeing the ending for yourself. It’s much more fun that way!

Director Allen Phelps has assembled a strong cast, who do right by Christie’s broadly drawn characters, each of whom has something to conceal. Regional theatre veterans Vogel and Trainor turn in solid performances in very different roles. Vogel is understated as the somber Major Metcalf and Trainor gives an over the top performance as the mysterious Paravicini.

Berk anchors the show nicely as the naïve and sympathetic young Mollie Ralston. Costume designer David Louder has given her a pair of attractive mid-century outfits to wear – rationing is still in effect in Britain, so no one has the wherewithal to dress extravagantly, although Lord knows the flighty Christopher Wren tries.

Bourzgui plays all aspects of Wren nicely. He is by turns excitable, silly, sly, scared, warm, and angry, all in a way consistent with his character. Giannone moves from milquetoast to menacing as he become jealous of Mollie’s friendship with Wren, and as Scholl’s dogged questioning brings everyone in turn under suspicion.

Only Moretto is miscast as Miss Casewell, who Christie clearly describes as “mannish.” While not voluptuous, she is just the wrong shape to be mistaken for a man, although she makes good effort lowering her voice, and striding manfully about in an impressive pair of black thigh-high boots.

The Theater Barn has a new sound system and is fully miked this season. In general, I am not in favor of body mics, especially in a small house like the Barn, but Karissa Monson’s sound design was solid and the voices did not sound artificially amplified. Having a modern sound system is a great boon to hearing-impaired patrons, since it not only boosts the sound overall but can be connected in to assisted listening devices. It also allows the Barn to adjust the levels if the heat necessitates leaving the air conditioning on during the show, or a heavy rain drowns out the actors voices. The real test of their system will come during their musical productions, which start in two week with Pump Boys and Dinettes.

Anthony Martin has designed a serviceable set, although the solid red curtain covering the large bank of windows up center is jarring. A softer color or a subtle pattern would have been a better choice.

The emphasis here is on the mystery, not the murder. There are no gunshots or on stage violence, so the show is good family fare as Christie keeps everyone guessing until the very end. This is a nice way to introduce tweens to the fun of mystery writing.