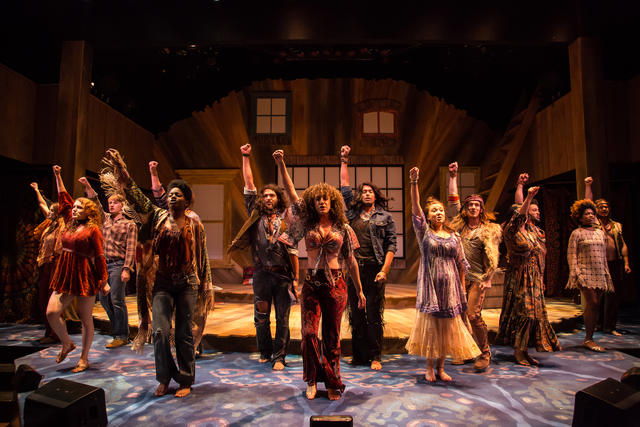 I was just shy of 15 when Hair opened off-Broadway and began to cause a stir in 1967, a pivotal time in American culture. When a significantly revised version of the show opened on Broadway in 1968, it rapidly permeated the culture it reflected. It’s impossible to overstate the national turbulence caused by the war in Vietnam, the terror that the draft imposed on students and families, the frequent public protests in cities, suburbia, on college campuses, and even in high schools. The war felt that much more personal because it was televised right in our living rooms, a new experience then.

Hair was a widely celebrated, groundbreaking musical. Because so many of its songs were covered by popular artists, and heard on radios across the nation, its fame reached far beyond the New York stage to make the show an international sensation.

With its multiracial cast, brazen sexuality, and mostly whimsical nature, with its actors (or the Tribe) frequently mingling with the audience, no theatergoer had ever seen anything like it. It also became famous because of its notorious nude scene, which was probably far less shocking than prospective audience members imagined: the Tribe rapidly undressed and stood proudly naked in a line downstage for a moment at the end of the first act.

The exuberant young Tribe now celebrating Hair at the Berkshire Theatre Group’s Unicorn Theatre is percolating with joie de vivre. I was enormously gratified to hear the songs that helped shape my adolescence presented by lush and powerful singing voices, including those of the stunning Latoya Edwards (Dionne), sexy Brandon Contreras (Berger), and lusty Eric R. Williams (Hud). As Sheila, Kayla Foster’s poignant rendition of “Easy To Be Hard” was arresting and memorable; an adorable trio of castmates, Livvy Marcus (Jeanie), Sarah Sun Park (Tribe ensemble), and Katie Birenboim (Crissy), joined in a charming presentation of “Air.” Will Porter (Woof) offers a hilarious delivery of “Sodomy.” As Claude, Andrew Cekala’s portrayal of a young man faced with a heart-wrenching decision is tremendously touching.

Really, while Hair has is packed with many more songs than most musicals, every song in the show is a gem, not only because of lyrics by Gerome Ragni and James Rado, and the music by Galt MacDermot, but thanks to this charming cast and to the excellent musical direction of Eric Svejcar and his orchestra, along with Lisa Shriver’s consistently delightful, fresh, and sometimes surprising choreography. Shane E. Ballard’s costumes were authentic and colorful, and Jason Simms’s scene design created an ideal minimalist, yet gritty, showcase for the action. Lighting and sound by Patricia M. Nichols and Nathan Leigh, respectively, buoyantly enhanced the show.

While I commend director Daisy Walker for her casting, pacing, and the easy interaction among the members of the Tribe, I was disappointed with a few of the choices she made. There is a song in the first act, “My Conviction” (a wry explanation of the flamboyance exhibited by males of all species) that is traditionally sung by a mature, conservatively dressed woman identified as Margaret Meade, who emerges from the audience with a silent male companion. At the end of the song, Meade flashes the audience to reveal she is a man in drag. I’ve always found that to be a witty bit of gender-bending. Walker has a female Tribe member sing it center-stage, and even though the singer has the appropriately conventional suit on, and she has a fine voice, a neatly show-stopping bit of humor was lost. Then there was the nude scene. At the end of Act I, some of the Tribe members clustered upstage in the dark, removed their clothes, and exited. From the audience, we could just about see dark outlines of bodies. While I think choreographing and clustering the actors could very well make a more authentic statement about the free-spirited, freely sexual nature of the Tribe than lining them up downstage, I don’t see the point of including the nude scene at all if the audience can’t see it.

I had a lot of fun vicariously reliving my wayward adolescence at Hair, as I think most Baby Boomers will. In fact, I know most theatergoers of all ages (except young children, perhaps) will enjoy themselves. Hair is emblematic of a particular time and place in history, and this production is faithful to that time and place.