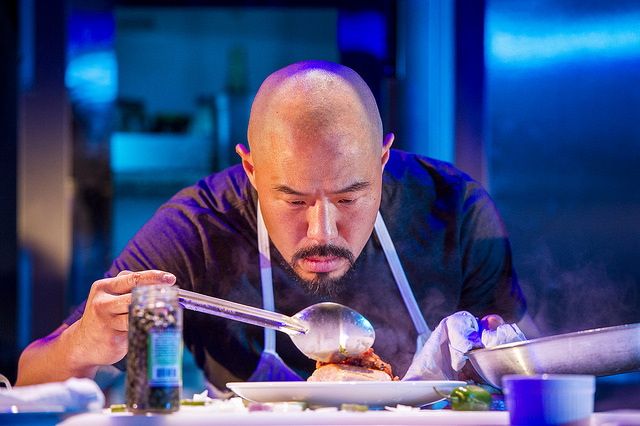 Accolades to every member of the team who contributed to this extraordinary production.  Billed as a “fit-for-foodies comedy” about the “intersection of creativity and commerce,”  Seared is so much richer than this description.  Directed by Moritz von Stuelpnagel, the play is set in the kitchen of a small restaurant in Brooklyn, with all the above-named delicacies  and more actually cooked during the performance by Chef Harry (Hoon Lee).  What a sensual delight:  the audience smells the dishes being prepared, hears them sizzling and sees the smoke arising from the many pots on the working stove. (In real life, Lee jokes that his “signature dish is water two ways—hot and cold.”  A New York-based chef was brought in to instruct the actor in the culinary arts.)  The meals are prepared at top speed as customers’ orders must be filled while waiters Rodney (W. Tre Davis) and Mike (Michael Esper) run in and out calling for dishes.  Neither the dining area itself nor the diners are visible.

Mike, who started this restaurant two and a half years ago with his partner, Harry, has provided all the capital to keep it going.  But now the money is running out and Mike is frightened that if the rent goes up, they’ll have to declare bankruptcy.  Consequently, but without telling Harry, he retains a consultant, Emily (Kyrsta Rodriguez) to expand their business.  Understandably, Harry explodes.

Mike cares for and respects his partner, wishing he had Harry’s talent as a chef, referring to him as a “consummate professional.”  Accordingly, Mike accompanies him early every morning to the fish market, and watches Harry reject almost everything because it doesn’t meet his impossibly high standards.  A critic for New York Magazine has referred to Harry as a “hidden jewel,” singing the praises of his scallop dish, which provokes all the diners to order it.  But Harry stubbornly removes it from the menu options because he cannot find enough flawless scallops to fill the demand.

This leads to a continuing battle between the forces of capitalism, Mike and Emily, who represent the bottom line, versus the artistry and humanity of Harry, a sort of philosopher, who questions whether Mike’s money is “more real than my life, my talent, my time, my patience, my love, everything that is essential and passionate about what I have and what I do.”  And despite Emily’s insistence that he is just another temperamental chef, we don’t buy it.

So yes, this is about the battle between art and commerce but Rebeck is too good a playwright to leave it at that.  Ultimately, as director Stuelpnagel wisely states in a Berkshire Eagle interview, the story comes “right back full circle to the human condition.”  There are plenty of laughs in this highly charged battle that threatens to heat up the kitchen hotter than any stove because we recognize ourselves in the very human conflicts dramatized in Seared.  How often have two friends, lovers, business partners hired a professional to resolve their differences and ended up hating each other?  As Rodney observes about Emily:  “She’s like so annoying and then everyone does what she says.”

The direction and performances in this play are as flawless as Harry’s elusive scallops.  The conversations that escalate into all-out screaming matches between Harry and Mike are both heartbreaking and funny as the two protagonists try to persuade each other, to preserve their friendship and to maintain their business, all while racing around serving and cooking.  On the other hand, Stuelpnagel is not afraid of silence, as Harry wordlessly cooks an entire meal, or immobility, as we watch Mike, Emily, and Rodney stand stock still staring at Harry, almost willing him to hurry up with the meal.  Rodney and Emily try their best to mediate—Rodney as a loyal friend of Harry’s, and Emily, an expert manipulator, spouting her new-age philosophy about what an honor it is to hear Harry and Mike shouting, commending them on “how pure” they are.

Designer Tim Mackabee’s fabulous set in wood and stainless steel is a miracle of tiny details, containing everything one imagines would be required in a restaurant kitchen.  David Weiner’s lighting punctuates the end of each scene by bathing the stage in colors, as the percussive sound of Palmer Hefferan’s music marks the passage of time.  Tilly Grimes’ costumes, especially those tight pants and high heels worn by Rodriguez, tell us who she is and possibly what she’s up to.

Seared, a highlight of the Berkshire summer season, is a tasty treat that deserves to run for a long time.  Unfortunately, this WTF kitchen closes on August 4th.