REVIEW: “Barefoot in the Park” at the Sharon Playhouse 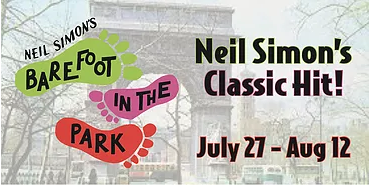 REVIEW: “Barefoot in the Park” at the Sharon Playhouse

Neil Simon, now 91 years old, is one of the premier comic playwrights of the American theatre.  The Odd Couple, Plaza Suite, California Suite, Last of the red Hot Lovers, The Prisoner of Second Avenue, The Sunshine Boys,  Brighton Beach Memoirs, Biloxi Blues, Broadway Bound, and more… are plays that are revived and revived and revived by community and summer stock theatres, such as Sharon Playhouse’s current production of Barefoot in the Park, because they are truly funny and there is that basic ingredient of human foibles.  They also draw sizable and appreciative audiences.  Many of the plays, however, are very dated.

In Barefoot…, which opened in 1963, and starred Elizabeth Ashley, Robert Redford, Mildred Natwick and Kurt Kasznar, (a film was released in 1967 featuring Redford, Natwick, Jane Fonda and Charles Boyer) Corie Bratter’s ambition is to be a good wife, housekeeper and daughter while husband Paul is the breadwinner.  Times they have a-changed.  This, of course, is not today’s world.  In addition, there are a number of references that are unknown to any one born in the last decade of the 20th century and on, for instance: Toni Home Permanent, Arthur Murray, a Polaroid camera, the Andrea Doria.

It’s understandable why the new administration at Sharon has brought back this chestnut.  They are in the process of reinvigorating their relationship with the community and, of course, the preponderance of theatergoers in this area is of an older generation, though, at the performance reviewed, there were a number of younger people.

Corie (Rebecca Tucker)  and Paul (Craig Bryant Belwood) are a six-day-married couple moving into their first apartment that is a six-flight brownstone walkup.  The gasping for breath arrival at their door by a telephone man (John Champion,) a delivery man, (Marc Boissey and Rocco Luongo at certain performances,) Corie’s mother (Susan Cella) and Paul, is a recurring joke.  The upstairs neighbor (Rex Smith) is something of a down-on-his luck and finances bon vivant.  Corie wants her widowed mother to resuscitate her life, and she intends do this by inviting her and Velasco for dinner on Friday night.  What ensues is a series of misadventures that turn into a roaring argument between the young marrieds and a liaison of a sort by the older couple.  Of course, being a comedy, and a Neil Simon comedy at that, everything ends the way it should.

All in all, the production works but with a few weaknesses.  It is more difficult to do a comedy than to perform in dramas. Tucker and Belwood have a strong stage presence and they get laughs, but, perhaps, not as many as they should have.  Some of their timing and vocal delivery needs sharpening.  Because of the occasional problem of delivery, some lines sound like announcements instead of the give-and-take of a married couple.

Rex Smith plays Victor Velasco with an endearing charm despite the character’s untidy past and opportunistic attitude as he often makes suggestions or brings gifts which Paul has to pay for.  Susan Cella as Corie’s mother, Mrs. Banks, has some of the best lines in the play and she blurts them out with delicious comic timing.  These two veterans pick up some of the slack of the younger actors.  Still, all four work well together.

The set by Randall Parsons looks like what a six-floor walkup should be.  In the first act, when the furniture hasn’t arrived, there is enough detritus to suggest the disorder of newlyweds on the first day in their new home.  In the following scenes the apartment is complete with furniture and lamps and other accouterments.  It looks stylish and comfortable.  Jamie Roderick’s lighting enhances the various moods of the play while maintaining the brightness of a comedy.  Jeremy Oleska’s sound design employs music from the ‘60’s to set the time and to create an energetic tone befitting a comedy.

Director Clayton Phillips keeps the show moving apace.  Some of the scenes could have been played as slapstick or farce, but he doesn’t allow that to happen.  He keeps his actors controlled so as not to hinder the unfolding of the story.

The production has many good moments and is an example of Simon’s wit and comic sensibility.  Despite the flaws, it is an entertaining evening in the theatre.