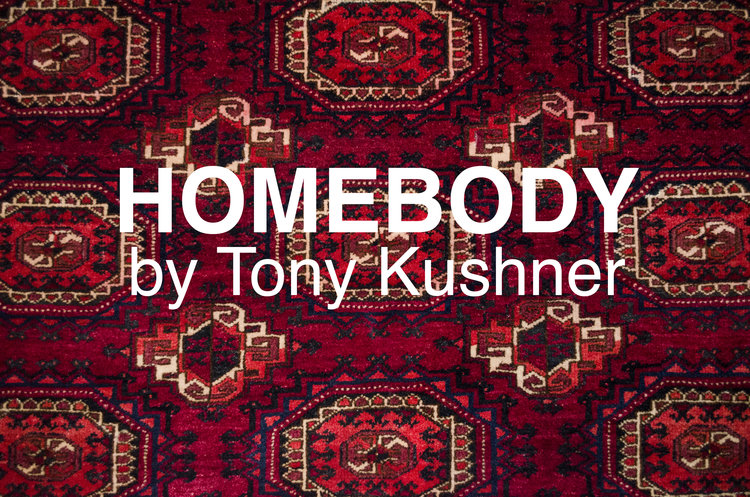 A middle-aged Englishwoman, identified only as Homebody, tries in vain to remember the name of her anti-depressant:  “a portmanteau chemical cocktail word confected by punning psychopharmacologists.”  She imagines her “brain floating in a salt bath, frosted with a rime of salt, a pickle-brine brain, pink-beige walnut-wrinkled nutmeat within a crystalliform quartzoid ice-white hoarfrost casing, a gemmy shell, gemmiparous:  budding.”

Who speaks like this?  “No one does,” says the Homebody, “it’s so irritating, I apologize, I do.”  Her hour-long labyrinthine monologue comprises the first act of Tony Kushner’s four-hour play, Homebody/Kabul.  Now, having sought and received permission from Kushner himself, the Ancram Opera House has mounted Homebody as a stand-alone production.

In a chilling irony, Homebody/Kabul received its American premiere (at the New York Theatre Workshop, starring Linda Emond and directed by the U.K.’s Declan Donnellan) in 2001, just weeks after 9/11.  In American Theatre, James Reston, Jr. commented: “this is a play for those who are interested in the root causes that preceded Sept. 11. . . who can bear to contemplate the thought that we have participated to some extent in our own tragedy.”

Kushner dedicated the play to his mother, whose life and death influenced the first- act monologue.   As in many of his works, what begins as the playwright’s personal experience ends as an expression of his political views.   Winner of the Pulitzer Prize and two Tony awards for Parts One and Two of Angels in America, the multi-talented Kushner also wrote A Bright Room Called Day, Slavs!, Caroline, or Change, The Intelligent Homosexual’s Guide to Capitalism and Socialism With A Key To The Scriptures, operas, translations and adaptations, screenplays and books.  In 2013 he was awarded a National Medal of Arts by President Barack Obama.

Homebody takes place in August, 1998, just before the American bombardment of a suspected terrorist training camp in Khost, Afghanistan.  The unhappy title character is married to a man (also on anti-depressants) who  cannot abide the sound of her voice; they do not speak.  He blames his wife for the problems of their daughter, “for whom, alas, nothing ever seems to go well.”  The world either censures her or is indifferent “which I have always taken to be a form of censure-in-potentia.”  She is sure that when people see her coming they say:  “Avoid! Her!;” it terrifies her to feel that the audience is thinking the same thing.

Although the Homebody talks about the awful times in which she lives, what brightens her world are books.  She claims:  “my borders have only ever been broached by books.  Sad to say.”  Seeking out secondhand bookshops, she delights in discovering the old information that has subsequently been replaced.  Throughout the monologue, she quotes from a guidebook published thirty-three years earlier that recounts the 3,000-year history of Kabul, chronicling in detail how each new tribe conquered the one that preceded it.

For a change of scenery (accomplished through lighting and sound), the Homebody has visited a Middle Eastern junk shop, filled with huge masks, amber beads, armor plates, puppets and beautifully-colored fezlike hats (costumes designed by Adrienne Westmore), ten of which she has purchased for her guests to wear at a party she is planning to celebrate her husband’s success on his job.   Imagining that the shopkeeper has emigrated from Kabul, she embarks on a dreamlike journey with this man as her guide.  Though she understands that Afghanistan is one of the world’s poorest countries, attracting no tourists (“who in the world would wish to travel there?”), the more she reads the more she is excited by the strangeness and beauty of Kabul.

Director Jeffrey Mousseau has described the challenge of casting the Homebody role, which demands “an actor of skill and stamina who can enchant an audience while being alone onstage for the entire show.”  He succeeded admirably, casting the sublime Danielle Skraastad, a native of Cairo, Greene County.   This performer leads us on the Homebody’s difficult journey, expressing the pain of her existence side by side with the joy of exploring new worlds.  Kushner’s incredibly complex language requires verbal acrobatics that only an accomplished actor can handle, and Skraastad, assisted by Text and Dialect Coach Paul Ricciardi, acquits herself masterfully.  While the historical events in the guidebook are less interesting than the Homebody’s comments and her flights of fancy, Skraastad “had us at hello.”  We jump onto this intense ride with her and never let go.

Thanks to the efforts of the Lighting and Sound designers (Zack Jacobs and Alex Sovronsky, respectively), the distinction between what happens in the kitchen of the Homebody and in her imagination is abundantly clear.  In addition, Sovronsky’s original music, featuring Middle Eastern strings and percussion, is mesmerizing.

The set, designed by Sarah Edkins, contains more books than a fair-sized library—they are piled high on and off the stage, sometimes stretching to the flies.  Though Kushner does not mention them in his stage directions, the astonishing collection of volumes seems perfectly in keeping with the Homebody’s dependence on books, which are her lifeline.  The change from dark colors on the upstage wall to the three-dimensional moonscape rocks of the Middle East is equally impressive.

Nancy Hatch Dupree, an Afghanistan historian, whose book, An Historical Guide to Kabul, sections of which were used by Kushner with permission in Homebody, will be the subject of talkbacks before the August 10th performance and after the final performance on August 12th at the Ancram Opera House.  With only one weekend left, don’t wait to buy tickets:  it would be a shame to miss this courageous solo performance.