REVIEW: “The Wedding Singer” at the Mac-Haydn Theatre 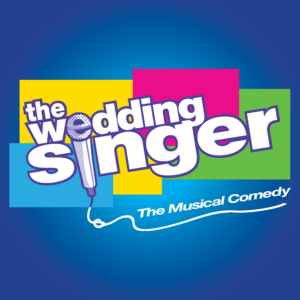 REVIEW: “The Wedding Singer” at the Mac-Haydn Theatre

As filling as the first slice of wedding cake, and almost twice as sweet, The Wedding Singer literally heads down the aisles of the Mac-Haydn Theatre with all the big hair, big shoulders, and big sounds that made the 1980s as memorable as  the New Coke, Reagan’s jelly beans, Marty McFly, and Material Girl Madonna references that pepper the show.

This latest production at the Mac, while certainly not the highlight of the theatre’s season, nonetheless brings a  pleasant two and a half hours to the stage, paying fluffy homage to the 80’s in the music, costumes and set design.

Conor Fallon brings considerable appeal to the title role of Robbie Hart,  whose one-hit wonder “It’s Your Wedding Day” has him in demand for all the best weddings in Ridgefield, NJ. As he proudly announces to the crowd at his band’s latest gig that tomorrow HE will be taking that walk down the aisle, you can almost hear the ominous organ music signaling the impending doom destined to follow. Jilted by “A note from Linda,” a jaded Robbie crosses paths with the hoping-soon-to-be-engaged Julia, who urges him to “Come out of the Dumpster “ where he has sought refuge after the debacle at the altar. Still reeling from his recent jilting, he effectively ends his and his band’s all-too brief career as sought-after wedding entertainers by turning a wedding reception into a full-scale “Casualty of Love.” This is a break-out number for Fallon; with increasing volume, and building intensity, he whips the misfits, rejects, and general wedding guests into a frenzy of anger, angst, and general degeneration. Forced to seek other venues and occasions where he can ply his and the band’s trade,

As the shallow breaker-of Robbie’s heart Linda, Maggie Eley offers up “A Note from Linda” as half Bride of Frankenstein, half Elvira, with a costume to match. At times her lyrics were nearly unintelligible, but she made it clear that marrying a wedding singer is not the life she envisioned, dumping the hapless Robbie to pursue a rock star life. After her hopes are dashed on that score, she seductively slinks back, enticing Robbie to “Let Me Come Home” , bumping and grinding her way into his bed but not his heart.

Kate Zulauf gives us a wistful, earnest Julia with just enough niavete to believe in hearts and flowers, doves and diamonds, champagne wishes and caviar dreams as she waits for her would-be fiance Greg to “Pop” the question, which of course he does, eventually. Again…cue the ominous organ music as we know the course of true love never did run smooth, especially when the true love of one partner is “All About the Green.” Zulauf has a lovely, if slightly light, voice, well-suited to her character and the numbers she performs. She more than holds her own in duets with Fallon, and her numbers in company with other cast are delightfully brimming with all the exuberance of youth, the energy of the decade, and the anticipation of  finding that “happily ever after.”

With little to do aside from channel Michael Douglas in Wall Street in his zealous pursuit of  Almighty Dollar, Nathanial Dolquist’s Glen Guglia manages to make his shallow, slimy, covetous, scheming presence felt during his moments on stage, even without the over-sized caricature of an early cell phone seemingly permanently attached to his hand.  His performance in “All About the Green,” accompanied by neon green glow sticks, and strident green lighting that plays brilliantly, literally and figuratively, against the stark black costuming, was as show-stopping a number as the later “Move That Thing” offered by the unlikely duo of Grandma Rosie and band member George.

And speaking of Grandma Rosie, who shares her heart and her basement with grandson Robbie, Meg Dooley again delights Mac audiences as that sassy, brassy, and downright bawdy character, whose writhing undulations in “Move that Thing” brought to mind the head-banging on-stage performances of various grunge bands of the 80s. None of that era, however, likely ever performed their numbers in a tight fitting, hot pink suit…and heels. A far cry from her earlier appearance in a Richard Simmons-tribute track suit, complete with headband, and dialog delivered while keeping up with those oh so popular back in the day step exercises !

As for the ensemble company, this is a youthful cast whose collective knowledge of the 80s comes from their parents; what they lack in personal experience of punk rock, grunge, and  80s attitude, they more than make up for with enthusiastic and on-key performances all around.

The production itself suffers somewhat from the first-time directorial efforts of Erin Spears Ledford, who has not quite mastered the intricacies of directing theatre in the round on an especially small stage. A number of key scenes were staged on a raised platform to one “side” of the circular stage, forcing the audience in two of the four sections of the house to crane their necks at length to the right or the left in order to take in the action. Overall, however, Ledford’s direction is crisp and sharp, and she directs the large ensemble to good effect throughout.

The excessive use of a revolving section on the center stage was also a distraction. No fewer than eight times in Act I and seven in Act II were cast members and set pieces set awhirl, giving the audience the sense of watching the show from a carousel horse. Just because this is theatre IN the round doesn’t necessarily mean it should be GOING around. In addition, the revolving portion of the stage is patterned with a black and white striping. Coupled with the revolutions, and at times combined with strobe lighting and/or the flashing of the iconic disco ball, there is a definite seizure trigger impact.

The costumes are worthy of their own curtain call, Costume designer Bethany Marx has captured the essence of 80s fashion. From the Princess Diana-evocative wedding gowns to Grandma Rosie’s Richard Simmons-style track suit, the look of the 80s is done to a T..for turquoise, accompanied by hot pinks, lime green, and bright yellow.

As has become the norm at the Mac, the house sits within the set, so to speak, as side pieces and walls are all designed to bring the 80’s to life around the stage.  Panels of turquoise, yellow, and pink, adorned with assorted geometric shapes, surround the stage and the audience, and Andrew Gmoser’s lighting is the perfect complement to each scene.

The stage manager in me needs to give special mention to the “cast as crew” as they seamlessly perform scene and set changes throughout the show. Tables, beds, bars, restaurants, even the Bridal Registry in a department store, flow on and off the stage space with perfect timing and placement. Clearly a testament to a dedicated cast and crew well-rehearsed in the intricacies of staging and striking in the dark.

While by no means the jewel in the Mac-Haydn season, The Wedding Singer is more than worth the trip down the aisle…..err, road,… to Chatham for an afternoon or evening back to the 80s. You won’t leave humming the score, but you might just want to dig out your shoulder pads, fire up the VCR, and enjoy an icy glass of New Coke while Sweating to the Oldies with Richard Simmons.

For showtime and more details please visit www.machaydntheatre.org or call the box office at 518-392-9292