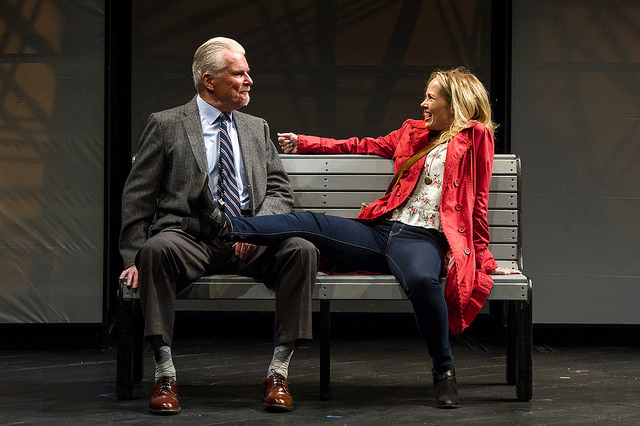 In 1927 the German physicist Werner Heisenberg posited what is often referred to as the Heisenberg Uncertainty Principle: it is not possible to measure simultaneously the position and the velocity of an object, even in theory. Playwright Simon Stephens has said that this quantum theory seems to define the way in which people live: unless we are seen by or engaged with other people, we barely exist.

The setup of Stephens’s play Heisenberg is a familiar one: an extroverted, eccentric woman “meets cute” with an older, introverted, conventional man; they clash, sparks fly, and they walk into the sunset together. Stephens asks that we take this setup and examine it through the lens of the Uncertainty Principle, applying it to human relationships.

The couple in question, an American woman named Georgie Burns (Tamara Hickey) and an Englishman of Irish descent named Alex Priest (Malcolm Ingram), meet in a London railway station. The fortyish Georgie strikes up a conversation with 75-year-old Alex, who is sitting quietly on a nearby bench.

Hickey, all frantic gesticulation and shrieking verbalization, homes in on Ingram with such delirium that even a marginally sane person would flee into the night. She moves in sometimes sweeping, other times jerking fashion, arms and legs jutting in multiple directions, and lights on Ingram’s bench. Buttoned-up Ingram, though nonplussed, submits to her questions and the two have something of a conversation.

Almost exactly one year ago, I had the great pleasure of seeing Hickey play Ariel in the company’s Roman Garden production of The Tempest. Hers was one of my favorite performances of the entire season, and she was the main reason why I’d looked forward to seeing Heisenberg. It grieves me to say that her portrayal of Alex was so abrasive and unnatural that I squirmed throughout the very long, intermissionless 90-minute play. Alex, we learn, comes from New Jersey. Hickey’s relentless screeching in an accent that swayed between working-class New York and Boston, with an occasional dash of the Queen’s English thrown in for good measure, distracted mightily from everything else, including Ingram, in the play.

Ingram was well cast, and gave a sensitive, substantive performance, but he may as well have been in another play. I wish director Tina Packer had reined in Hickey, and given her more guidance. Because Hickey presented a caricature rather than a real human being, there was, for me, no transmission of feeling, and that’s deadly for a theater audience.

Packer did a neat job of directing the transitions between each of the six scenes, where the actors managed to dress and undress on stage as well as to help move pieces of Juliana von Haubrich’s elegantly minimalist set. Charlotte Palmer-Lane’s costumes expertly intensified Georgie and Alex’s characters. I did find Amy Altadonna’s sound design rather peculiar at times; for example, during a scene where Alex is reminiscing about his 10-year-old sister, I was certain I’d heard a baby cooing and gurgling from somewhere in the audience, but when that cooing and gurgling emerged a second and third time, I realized it was a sound effect. It make no sense to me. Dan Kotlowitz’s lighting was beautifully designed and brilliantly enhanced the action.

Despite the familiar setup of Heisenberg, the subjects of human connection and isolation can’t be overexplored. While I wouldn’t call Stephens’s play masterly, I think there is so much potential for transformative poignance in the two characters he created, and I wish that potential had been mined in this production.