REVIEW: “Pride and Prejudice” at the Dorset Theatre Festival 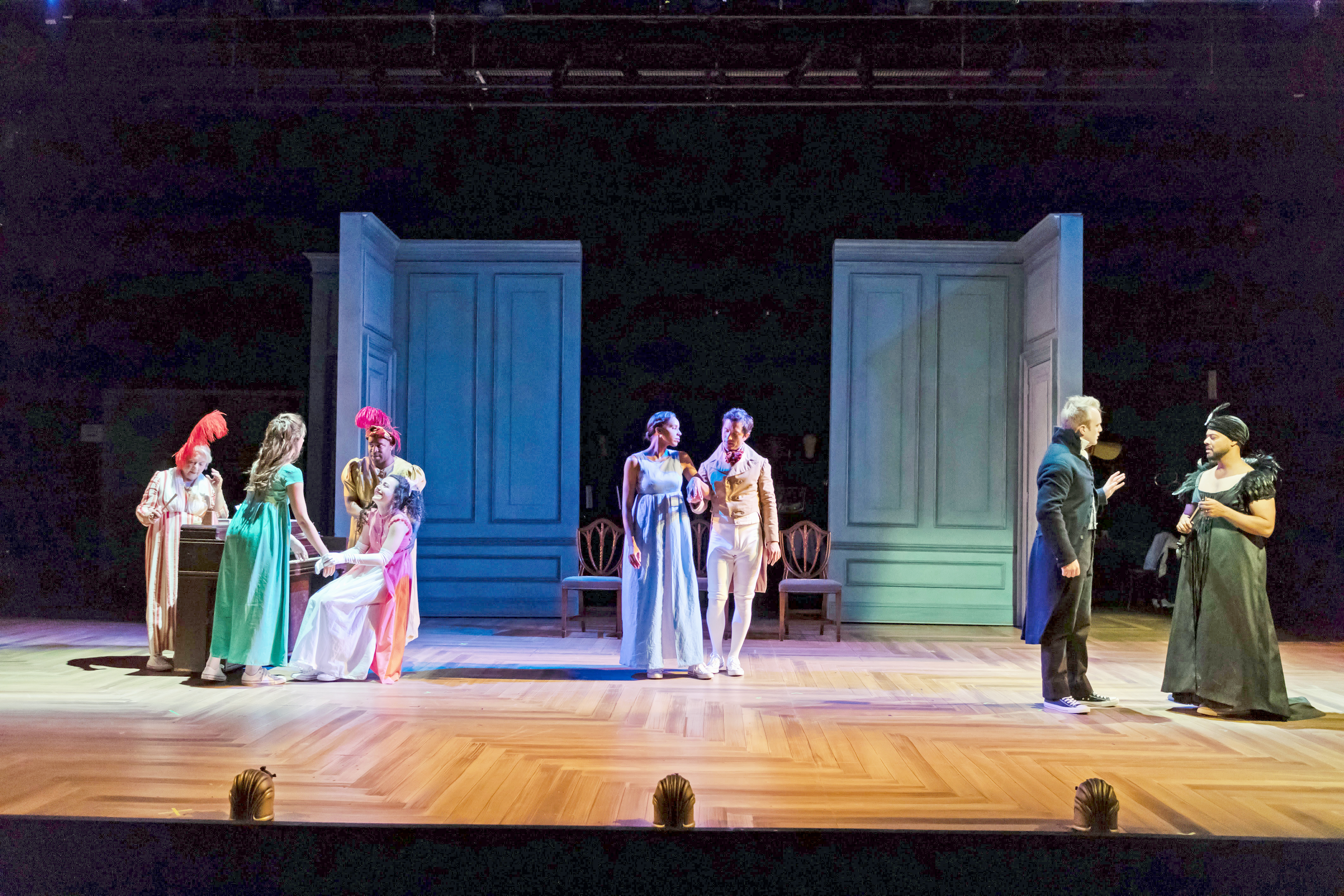 REVIEW: “Pride and Prejudice” at the Dorset Theatre Festival

“What defines a great work is that it continues to be generous to people who are making new productions.” – Daniel Fish*

Jane Austen is long out of copyright, and so her works have been open to new interpretations for some time now, and their greatness shines through their endless generosity.

Kate Hamill**’s adaptations of Austen – Sense and Sensibility, Pride and Prejudice and soon Northanger Abbey and Mansfield Park – are all the rage. An actress and a playwright, and she has appeared in many of her theatrical adaptations of classic novels – Hamill  approaches these works as a modern woman and as a performer, and she has publicly stated that she finds Austen very, very funny and thus injects a heavy dose of slapstick into her adaptations.

From research I have done (there are several video clips of previous productions of this play), Hamill’s work is true to Austen’s immortal tale, full of marvelous characters, true suspense, and romance, but what director Christopher V. Edwards, (Artistic Director of the Actors’ Shakespeare Project which has collaborated on this production), has staged at Dorset is that excellent story rudely interrupted at odd intervals by bizarre choreography (by Alexandra Beller) and inappropriate low comedy. Edwards cannot find the right balance of Austen’s subtle but deadly wit and a bawdy Three Stooges-style slapstick. He cannot decide whether he is staging Austen or Hamill.

So there is the production, and there is the performance. Edwards is blessed with a gifted ensemble of eight actors playing fourteen roles, often in non-traditional ways. Jessica Frey anchors the cast with a solid performance as the prickly and opinionated Lizzy Bennet.

Like Frey, Joan Coombs gets to play just one character throughout as the delightfully dithering and endlessly grasping Mrs. Bennet. And Dave Quay stays in character as the socially awkward and overly principled Mr. Darcy. People often identify Darcy as the Pride and Lizzy as the Prejudice of the title, but here they display both traits equally, along with a healthy dose of stubbornness. Quay is a fine physical comic, and his skills are often what saves the worst moments of slapstick.

Mrs. Bennet gets only four daughters to fuss over here – the fourth daughter in Austen’s novel Kitty, is nowhere to be found. Which is fine because Kitty is colorless compared to the noble but passive Jane (Krystel Lucas), feisty Lizzy, free-spirited Lydia (Aishling Pembroke), and Mary (Carmen Lacivita), the eminence grise of the Bennet family. I do find the trope of having an unattractive girl/woman played by a man a little tiresome. Just because a woman’s physical appearance isn’t enticing to men doesn’t mean she is masculine or asexual. And the running gag of Mary sneaking up on people and having them shriek in surprise runs on when it should just run out.

But Lacivita invents two very distinct and entertaining characters as the dour Mary and the puppy-dog perky Mr. Bingley, even though Edwards extends the “puppy dog” gag much longer than is necessary.

Ryan Quinn plays that cad Mr. Wickham, that most unwelcome of guests Mr. Collins, and the glamorous Miss Bingley with panache. His Wickham is a bit too bland, but his Collins, complete with an annoy speech impediment and an oleaginous demeanor is just deliciously heinous. That Omar Robinson, as the milquetoast Charlotte Lucas, lowers herself to marrying him is a bold statement about how limited the choices were for woman without financial fortune in the early 19th century.

Robinson is also the long-suffering Mr. Bennet, so he gets to play both a woman and a man mated with a trying spouse!

Lydia is a decidedly the “fun” Bennet sister and Pembroke looks like she is having a ball playing her. She gets to “sober up” a bit in Act II when she assays the role of Lady Catherine de Bourgh. Sadly Lucas, who is a winsome and sympathetic Jane for most of the play, is draped in what look like layers of lace tablecloths that cover her from top to toe as Miss De Bourgh, where she speaks in a croaking voice and paws poor Mr. Darcy most brazenly. (I confess I have no strong memory of Anne De Bourgh in the novel, other than that she was “sickly” and “intended” for Mr. Darcy since birth.)

Over all Haydee Zelideth’s costume design is solid, full of movement and color. Since several actors have to make very quick changes they are layered over a basic palette of white – a nice change from the basic black so often used. But like Edwards direction, there are odd and distracting anomalies. What is with those enormous cardboard poke bonnets that look like horse-heads? Why does Charlotte Lucas, played by a black man, wear an inexcusably Aunt Jemima style kerchief? And why oh why is Frey allotted just one drab and droopy pea soup colored dress for the entire show?

Also boring and monochrome, but in a good way, is Alexander Woodward’s set, which consists of three massive moveable monoliths which are minimally rearranged to indicate the move from one stuffy Georgian drawing room to the next. Their height and heft, along with the unrelenting grey green paint job, surround the performers with the representative strictures of society.

It is greatly to the credit of Jane Austen, Kate Hamill, and this stellar cast that there are many enjoyable moments in this Pride and Prejudice, although it will obviously send any true Janeites sprinting for the exits. The romances ring true, as do the family ties that are so central to Austen’s story. I hope I get to see this or some of Hamill’s other work in the hands of a different director.

*From a recent New York Times article covering a recent spate of innovative productions of Oklahoma! which have been produced with the blessing of the Rodgers and Hammerstein Organization.

**For the curious, here are links to two interesting interviews with Kate Hamill: