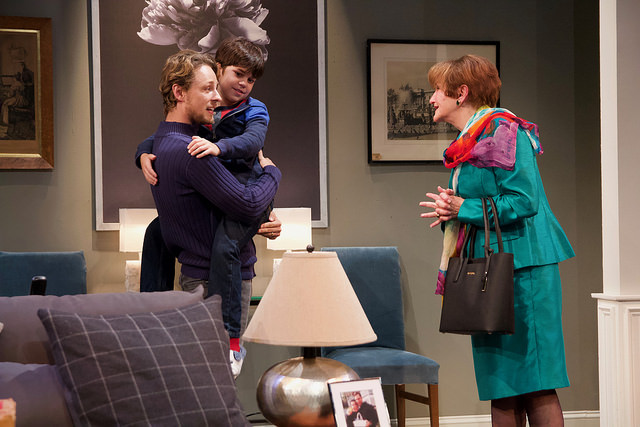 “There is nothing permanent except change.”  –Heraclitus

As the lights come up we see two people, a mature woman wrapped in a mink and a handsome man on the outskirts of middle age, peering into the distance. They stand parallel, about a couple of yards apart, in a well-appointed New York apartment, but they are clearly making an effort to engage in polite small talk. Perhaps the man, Cal Porter (Bill Mootos) is trying a bit harder to entertain his guest, Katherine Gerard (Annette Miller), as he describes the sweeping view from their Central Park West window. He animatedly points out the reservoir, the Metropolitan Museum, the building where Jacqueline Onassis lived.

Occasionally he pauses to ask Katherine if he may take her coat (“I’m not staying”) or if she would like some refreshment (“I’m fine, thank you”). Her eyes never leave the view of Central Park, and we notice there is a profound sadness behind the pinched expression on her face. We notice that although Cal looks in her direction frequently as he continues chatting, Katherine continues to stare ahead for awhile. It takes her a bit of time to participate in the conversation.

Katherine’s son, Andre, who died from AIDS 20 years earlier, had been Cal’s partner. She has not seen Cal since Andre’s memorial service, and today’s visit was unexpected. She has been living in Texas and, we soon learn, her husband has recently died.

Miller’s quietly blistering a performance is masterful. Her Katherine wrestles with despair, anger, and regret. As she states her belief that “Andre wasn’t gay when he came to New York,” that somebody “made him gay,” we learn that Andre had been a talented actor whose career was on the rise, yet she never attended his performances. Mootos elegantly conveys Cal’s capacity for forgiveness. He is a man who has learned to accept and embrace life’s changes. His is a steady, knowing portrayal, emanating loving kindness even as he steels himself for Katherine’s resentment.

Cal’s husband, Will Ogden (David Gow), and their six-year-old son, Bud (Evan Miller in the performance I saw, alternating with Hayden Hoffman) eventually burst into the apartment after a romp in the winter-slushy park. Gow’s performance seems effortless and natural, and the tender attachment between Cal and Will is palpable, as is the love for their bright, energetic son. (Evan Miller was thoroughly adorable.)

The contrast between Katherine’s life, and the life of this family, is arresting. Only because of the compassion and acceptance of Cal, Will, and Bud do we realize that the newly widowed Katherine has shown up here because, albeit unconsciously, she desperately craves love, and Bud’s friendly curiosity becomes her vehicle for redemption.

Director James Warwick has done a stellar job of casting and orchestrating Mothers and Sons. His work demonstrates a clear grasp of the complexity of human relationships, and of McNally’s message. The technical side of this production was satisfying all around, including Patrick Brennan’s set (a lovely, lived-in Central Park West apartment) and Stella Schwartz’s well-turned-out costumes. James W. Bilnoski’s lighting design beautifully underscored the significance of a cold winter’s day evolving into a warmly lit home. The sound design by Erik T. Lawson was first-rate and heartwrenching.

I left the theater feeling as if I knew the characters intimately, and I felt privileged to have joined Katherine as she burrowed mightily through sadness and resentment to emerge knowing something of the possibilities created by acceptance and optimism.