REVIEW: “Sister Mary Ignatius Explains It All for You” & “The Actor’s Nightmare” 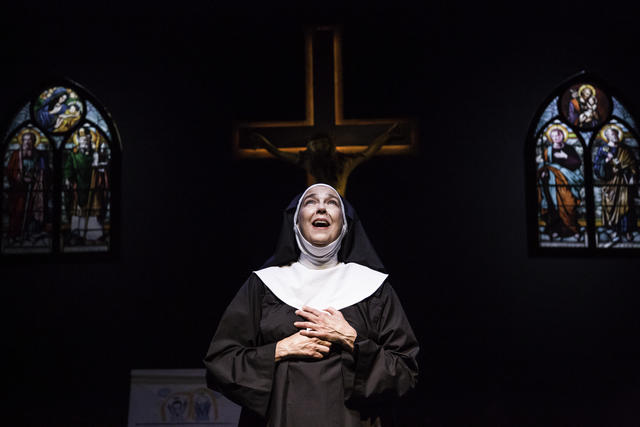 REVIEW: “Sister Mary Ignatius Explains It All for You” & “The Actor’s Nightmare”

Christopher Durang burst onto the New York theatre scene in the late 1970’s writing plays of scathing satire and social commentary.  His work includes Beyond Therapy, Baby with the Bathwater, Why Torture is Wrong, and the People who Love it, and the Tony Award winning best play Vanya and Sonia and Masha and Spike in 2013.  He first gained recognition in 1979 for Sister Mary Ignatius Explains it All for You which was followed in 1981 byThe Actor’s Nightmare performed as a double bill.  These two plays are now at Berkshire Theatre Group’s Unicorn Theatre in Stockbridge, MA.

The curtain-raiser is The Actor’s Nightmare, a play that has many references  theatre people will understand, but a general audience may not.  For instance, the major character’s name is George Spelvin.  How many people know that “George Spelvin” is used when an actor does not want his name in the program or he/she is doing a dual role or perhaps violating Actor’s Equity rules?  Other characters in the play have names of performers from theatre history which may not be recognizable.

Anyway, George (Matt Sullivan) finds himself on a stage a short time before a performance and he is urged by the stage manager and various actors to get ready go on in place of Edwin Booth in a production of Noel Coward’s Private Lives.  In quick turn he finds himself in Hamlet, followed by Samuel Beckett’s Endgame and finally A Man for all Seasons.  His scene partners, especially Harriet Harris show their frustration by trying to cue him but not supplying the line until the ingenious stage manager makes an appearance.  Sullivan’s Spelvin is utterly confused as he fills in dialogue lapses by throwing out lines from myriad other plays finally singing the “ABC” song.  The play, as funny and as touching as it is at moments, is close to being a bit of fluff.

Sister Mary Ignatius…, however, is far from fluff.  She (Harriet Harris again) is addressing an assembly at Our Lady of Perpetual Sorrows School.  The first part of her lecture is pedantic made comic by Harris’s intonations and timing.  She occasionally calls on her favorite student Thomas (Levi Hall) to quiz him or to bring her water, then rewarding him with a cookie.  She answers questions from the audience openheartedly, curtly or by ignoring them.  The play turns dark as four former students return as adults to do a pageant in celebration of the birth of Christ to honor her.  Their ulterior motive, however, is to accuse her of destroying their lives.

Durang’s obvious intent is to tear into his childhood education and the Catholic Church. This is a blistering denunciation and commentary on religious hypocrisy mitigated by the humor, especially as played by Ms. Harris.  Having been written in 1979 the changes in Catholic dogma have not been recognized, nor, of course, the disgraceful behavior of the clergy.  Durang would have field day with that!

In addition to Ms. Harris and Mr. Sullivan the other members of the cast, Anna O’Donoghue, Tom Story and Ariana Venturi, are in both plays.  Their work finds the humor, which isn’t difficult to do, and they handle the more serious moments well.  Matthew Penn’s direction serves the script and his actors; his staging of the comic scenes is both expansive and controlled.

Alan C. Edwards’ scenic and lighting design dresses the stage well with the use of several simple set pieces giving the actors a goodly amount of space in which to work.  Costumes by Hunter Kaczorowski suit the characters’ various roles.

The Actor’s Nightmare is an easily acceptable play,  Though the performances and production elements work, Sister Mary Ignatius… may offend some people’s sensibilities.