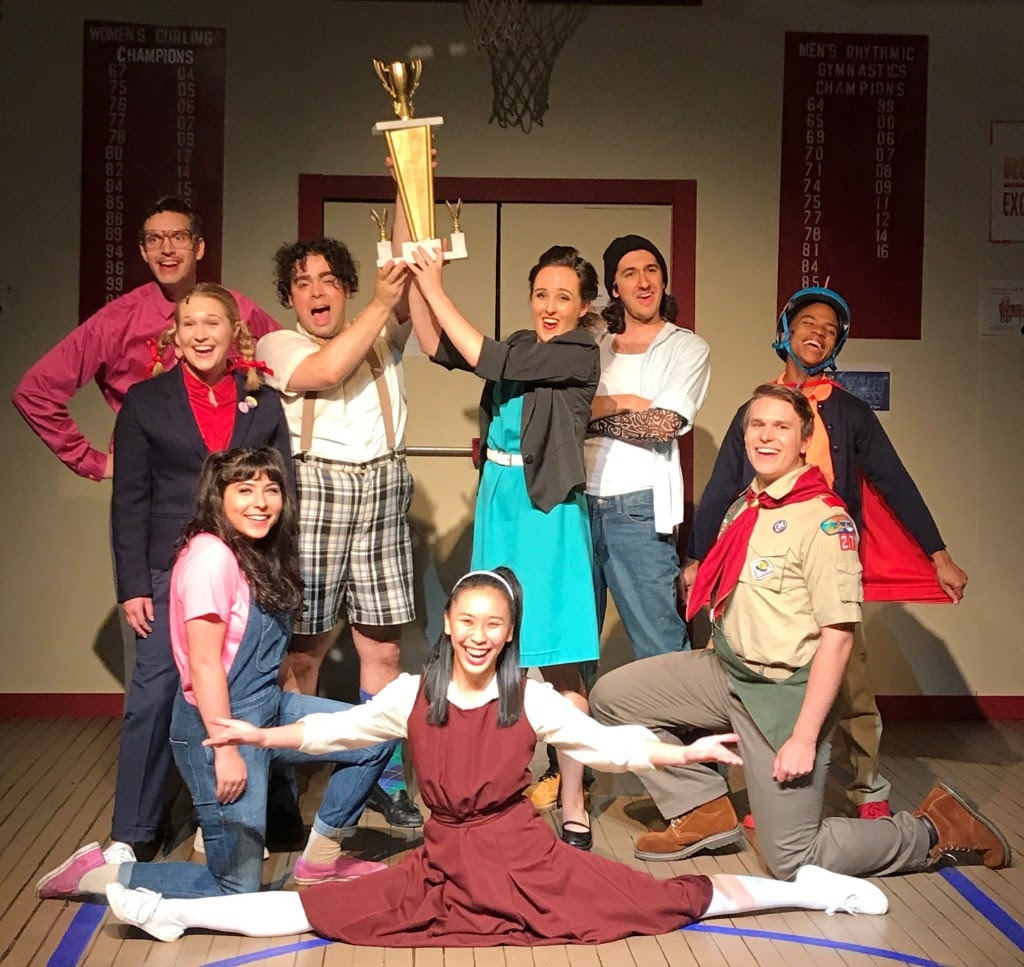 I have seen this show several times since the icy day in February 2004 when I slithered down to Barrington Stage to see a workshop and it has never failed to charm me. In the interim it has been produced widely, won a couple of Tonys, and made bona fide stars out of some of the young actors I saw that February day.

The premise is simple. Six middle schoolers, ages about 11-13, are gathered to compete in a spelling bee at the county level because they have each won the bee at their school. The winner will go on to the state competition, and the winner there will go to the national spelling bee in Washington DC. So while these kids have achieved something, it is several steps away from being a great big something, and, as we all know, being a good speller is not the route to adolescent popularity.

So these kids are different in an awkward way from the start. William Barfee (Paul Urriola) – it’s pronounced Barfay – is the adenoidal nerd who is too tall, too chubby, too smart, and too annoying to be anything but an outcast. The youngest contestant at age 9 is Logainne Scwartzandgrubenniere (Liz Eradi) who internalizes in intense pressure to succeed inflicted on her by her two dads. Marcy Park (Christy Yin) is tired of being the best at everything. The dreamy Leaf Coneybear (Xavier McKnight), who comes from a large, freewheeling family, only got to the county bee because the winner and first runner up from his school had to attend a Bat Mitzvah. Chip Tolentino (Patrick Scholl) is last year’s county winner and one of the older spellers in the competition, which leads to his ultimate downfall. And Olive Ostrovsky (Alexa Renee) arrives late, without her registration fee, and desperately hopes that her father will arrive in time to see her complete (her mother is on a spiritual quest at an ashram in India.)

Rona Lisa Perretti (Alexandra Foley) a county winner from many years back has returned to host once again, assisted by Vice Principal Douglas Panch (Travis C. Brown), and Comfort Counselor Mitch Mahoney (Levi Squier), an ex-con doing his community service handing a juice box to each speller as they are eliminated. And so the bee commences.

It is no surprise that Rachel Sheinkin’s book for this show won a Tony. It is just hilarious. Act I, when the cast deftly folds in four spellers recruited from the audience, is particularly hilarious, and it guarantees that you never see the same show twice. Some of my fondest memories of productions over the years have come from the times audience spellers have either frozen or proved themselves natural hams. The performance I saw at the Theater Barn featured two audience recruits who added greatly to the fun of Act I.

While I enjoy this show – I defy anyone NOT to enjoy this show! – I am always slightly uncomfortable when adults play children. Luckily the cast at the Barn is young enough to “pass” and succeed conjuring up their inner child with kindness and truth. Renee is particularly winsome as Olive, who is the least cartoonish of the young characters. She has a strong singing voice and a warm smile that easily win her the sympathy her character requires.

In the most broadly cartoonish role, Urriola makes William Barfee entirely human while retaining the annoying traits that make the character both instantly recognizable and hilarious. We have all known children like that, children who you despair will never grow up, or, if they do, will continue to be as disastrous as adults has they have been in their early years, who then completely surprise you by becoming kind, attractive, productive members of society.

Marcy Park is the most stereotypical character. She is everything you expect an Asian-American to be – an overachiever in every aspect of life. I have seen productions where she accompanies herself on the piano while singing her solo in several languages and dropping down into alarming splits. There is no piano on stage but Yin does the character proud in all other departments. She is especially good at portraying the real anger and sense of exhaustion Marcy feels about endlessly living up to this ideal.

McKnight is just delightful as Leaf Coneybear, in his dragon bicycle helmet and his red cape. When Rona Lisa tells us Mr. Coneybear makes all his own clothes you are not in the least bit surprised. McKnight is a tiny man with a cheerful mop of hair cut into an eraser-head style. He is not the strongest singer, but he fully embodies his character with great charm.

Chip is the character who wasn’t in the original workshop production, and I have always viewed him as something of an interloper. His more mature storyline, while amusing, also sets him apart from the younger competitors. But Scholl looks like he’s having a blast playing him – in his boy scout uniform and an extra dose of snark. This has been a good season at the Barn for this young performer, who has had a chance to show versatility in sveral leading roles.

Eradi fails to capture the high-strung nature of the lisping Logainne. The originator of the role, Sarah Saltzburg, created Logainne’s signature hairstyle with painfully tight braids pulled from near the top if her head. Eradi’s braids are too low and too loose. The tight braids are emblematic of Logainne’s state of mind, and they must, in turn, have some influence on the actress’s experience playing the character.

Foley is once again in good voice as Rona Lisa, bringing a warmth to her adult presence at the bee. Brown is perfect as the nebbish and troubled Vice-Principal Panch – his little break-down being a comic high point for his character. And Squiers is all laid-back menace, but not too much menace, as Mitch.

William Finn has penned a delightful score. Quirky enough to be identifiably his, but mainstream enough to make the show accessible to the average American musical audience. Ollie Townsend and three additional musicians – Ian Tucksmith on drums, Tom Gerbino on viola, and Will Hayes on cello – provide solid accompaniment from their loft high above stage left.

Marc de la Concha has directed and choreographed as well as he can given the very small stage space at the Barn, and the steep set of bleachers designed by Anthony Martin. Otherwise Martin’s school gym set is fun and full of nice humorous touches (notice the sports the Putnam County High School has excelled in over the years.) The costumes for these characters are now iconic, giving costume designer David Louder little leeway for creativity, but they serve their purposes.

This really is a show for the whole family that will have you laughing out loud and send you home feeling uplifted and – for those of you who have graduated from middle school – extremely glad that that awkward stage of life is behind you!