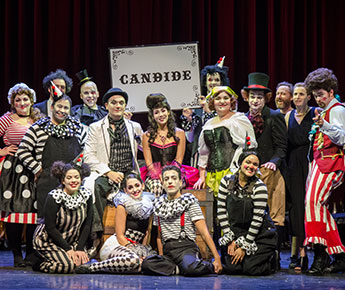 As the world probably knows, 2018 would have been Leonard Bernstein’s 100th birthday,  also that of Jerome Robbins.  Bernstein was a musical genius as a conductor, music educator on television and a composer of classical music, ballets, and broadway musicals.  In our part of the world Barrington Stage Company has produced a dynamic West Side Story while Tanglewood has dedicated several programs to Bernstein with special focus the week of August 18th through the 25th, his actual birthday.

In addition to West Side Story his musicals include On the Town, Wonderful Town, Trouble in Tahiti, a seldom-produced Peter Pan and Candide, which straddles Broadway musical and light opera and was part of the week-long celebration in a staged performance on August 22nd and 23rd in Ozawa Hall.

The show has had a long and controversial history.  In 1953 playwright Lillian Hellman (The Little Foxes, The Children’s Hour, Toys in the attic, etc.) suggested to Bernstein they should collaborate on a musical version of Voltaire’s satirical novella.  Hellman had never written a comedy and highly respected director Tyrone Guthrie was a newcomer to Broadway.  After several stops and starts (at the same time Bernstein was working on West Side Story with Arthur Laurents, Jerome Robbins and Stephen Sondheim) the show opened on December 1, 1956 featuring Barbara Cook and Robert Rounesville for seventy-three performances, not a lengthy run.  Arguments and accusations were bandied about followed by relief that it closed.

A 1973 restructured version directed by Hal Prince with Mark Baker, Lewis J. Stadlen and Maureen Brennan at the Brooklyn Academy of Music later transferred to Broadway.  The new libretto was written by Hugh Wheeler with contributions by Sondheim, Richard Wilbur, John Latouche as well as Bernstein.  It ran for almost two years.  A third production in 1997 featured Jim Dale, Andrea Martin, Jason Danielly and Arte Johnson for a 104 performances.

The music for the recent celebratory production was performed by The Knights, a 23-member ensemble under the artistic director brothers Colin, a violinist, and Eric Jacobsen, conductor.  At first a loosely structured chamber music group, they cooperatively developed their arrangements and incorporated in 2007.  Every musician contributes to the interpretation of any given piece creating a sense of camaraderie and a unified approach.  Their sound in back of Candide was glorious.

The production, with a cast of 13, directed by Alison Moritz and choreographed by John Heginbotham, sparkled.  With minimal props and set pieces, the staging was inventive utilizing the hall’s expansive stage while the choreography was dazzling.

Aaron Copp’s stage and lighting design enhanced the production’s objectives by focusing attention on the action and the vocalists.  The costumes designed by Amanda Seymour, using the Commedia as a basis, were colorfully fitting for the style of production as were Tommy Kurzman’s wigs and make-up design.

Bernstein and all his creative partners would have been exhilarated by this Candide.  Regrettably it had only two brilliant performances.