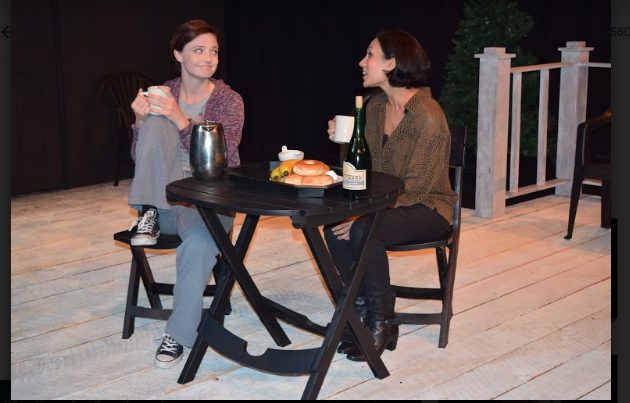 David Auburn’s Proof burst on the national consciousness nearly twenty years ago – winning Tonys and a Pulitzer and being made into a big budget, star-studded film – so the initial flurry of professional and amateur productions across the country has run its course and the play is ripe for revisiting in the #metoo era.

A simple play about complex subjects, Proof centers on 25-year-old Catherine (Talley Gale) who has just lost her widowed father, Robert (Richard Howe), a brilliant mathematician at the University of Chicago, after years of mental illness during which she was his sole caregiver. Her only sibling, older sister Claire (Halley Cianfarini), has opted for a high-powered career in Manhattan, but of course Claire is headed home for the funeral. Also in the mix is Hal (Ethan Botwick), a young professor of Mathematics at the University who was mentored by Catherine and Claire’s father, and who is going through the late professor’s effects to see if any important and undiscovered research survives him.

Claire and Hal begin a relationship, and she gives him a notebook containing an astonishing mathematical proof that she claims she wrote. But Claire doesn’t even hold an undergraduate degree, her studies having been interrupted by her father’s illness and her decision to care for him, and she also seems to have inherited some of his mental instability. Can she prove that the proof is her work and not a last burst of brilliance from her father?

At Oldcastle Eric Peterson has directed a gentle, low-key but deeply engrossing production. Because there is less high drama, the characters come across as more realistic. Gale, who is on stage nearly non-stop, presents Catherine as exhausted and grief stricken – after all these years of dealing with her father’s non-lethal mental illness it is a sudden cardiac event that carries him off – but not mentally unbalanced. There is a seismic shift for a caregiver when they suddenly wake up one morning and no one needs them anymore. Catherine is not only unmoored emotionally, but because was a caregiver during the years most people spend finding themselves and establishing a career, she also has no sense of herself separate from her father – except for her proof, which she worked on in the wee hours of the night, the only time when her father didn’t demand her full attention.

Gale literally twists herself into pretzels trying to simultaneously hug herself and render herself as small as is humanly possible. But when she and Hal connect and she gives him her most valuable possession, the thing that establishes her as someone other than her father’s daughter, we see the relative freedom and joy in her movements.

Botwick’s Hal is equally physically restricted. Like Catherine, he has lived in Robert’s professional shadow, – before he was 25 Robert had already made two discoveries that changed the course of modern mathematics. Both worry that the adage that a mathematician’s best years are over by the time he or she is 25 – in other words at about the age they receive their doctorate and embark on their academic career – is true. Have Catherine and Hal’s best years already passed? Hal sees himself as a mediocre mathematician and being able to discover and publish a posthumous proof of Robert’s could make his career. The likelihood of the proof Catherine gives him being hers and not her father’s seem slim…

Cianfarini’s Claire is all yuppie bonhomie. Freshly ground gourmet coffee, jojoba crème rinse, and an engagement to her equally upwardly mobile boyfriend form the center of her world. Accepting early that she has inherited only a small portion of her father’s mathematical skills, she has settled into a career as a currency analyst. She acknowledges that Catherine has inherited far more from their father – but worries whether that is a good thing.

Howe’s performance as Robert was a bit of a disappointment. I described Peterson’s production as low key, but in Howe’s case we get little sense of Robert’s illness, his brilliance, or his neediness. Whether there is a physiological connection or not, mental illness and great genius often coincide. This and the deep connection between Robert and Catherine – and we see Robert only in Catherine’s memories and imagination – are lacking.

On my previous encounters with this play I didn’t see the focus on the relationship between Catherine and Hal as central to the plot, but now it takes on a different complexion. At previous production I can remember thinking Hal was quite the villain, but director Eric Peterson makes it clear here that Catherine and Hal are genuinely attracted to each other, and that neither is using the other for ulterior motives. In fact, I don’t think I have ever seen a more engaging love scene than the one Gale and Botwick enacted at the end of Act I.

The other bit of gender politics in the play is the issue, which is still the case, that the majority of mathematicians are male. That a woman, and a young, uncredentialed woman at that, could best the “guys” at their game raises all sorts of toxic masculine reactions, which are played only subtly here.

When you enter the theatre you are greeted by Wm. John Aupperlee’s set depicting the back deck of the house Robert and Catherine share, adorned with Cory Wheat’s projection. I say adorned because as soon as the initial projection – an astonishing black and white trompe-l’œil image of the rear of the house – is switched for more subtle sunlight-through-the-leaves patterns, as it must be or the actors would be performing with blotchy projections all over them, the “house” resolves into nothing but a matte black wall with a door in it. The house projection returns during scene changes, but every time it vanishes again you feel a sense of loss.

It took me until well into Act II to understand that that one door – through which people seemed to access both the interior of the house and the outside world – was meant to be the back door of the house and that there was an unseen front door as well. In other words when people “left the house” they were going in through the back door and then out through the front door. In my mind exits to the outside world should have been made off of the deck, stage left, and indeed occasionally they were. When the critic has to spend a long while pondering a door there is something wrong with the set and/or the direction.

Ursula McCarty’s costumes subtly conveyed character and socio-economic rank while offering freedom of movement. The matter of the vanishing house aside, Wheat’s projections were fine, as was David V. Groupé’s lighting. Wheat is also credited with the sound design, which consisted mostly of an increasingly loud and insistent recording of The Sound of Silence played during scene changes. I usually like that song…

My technical quibbles aside, this a strong and moving production of a thought-provoking play. If you saw a production a decade or so ago, I encourage you to revisit it. And take along a teenage or twenty-something woman while you are at it. There is good fodder for debate and discussion on the ride home.

For ticket reservations or additional information contact Oldcastle Theatre at www.oldcastletheatre.org or 802-447-0564.