REVIEW: “There Is A Happiness That Morning Is” at Bridge Street Theatre 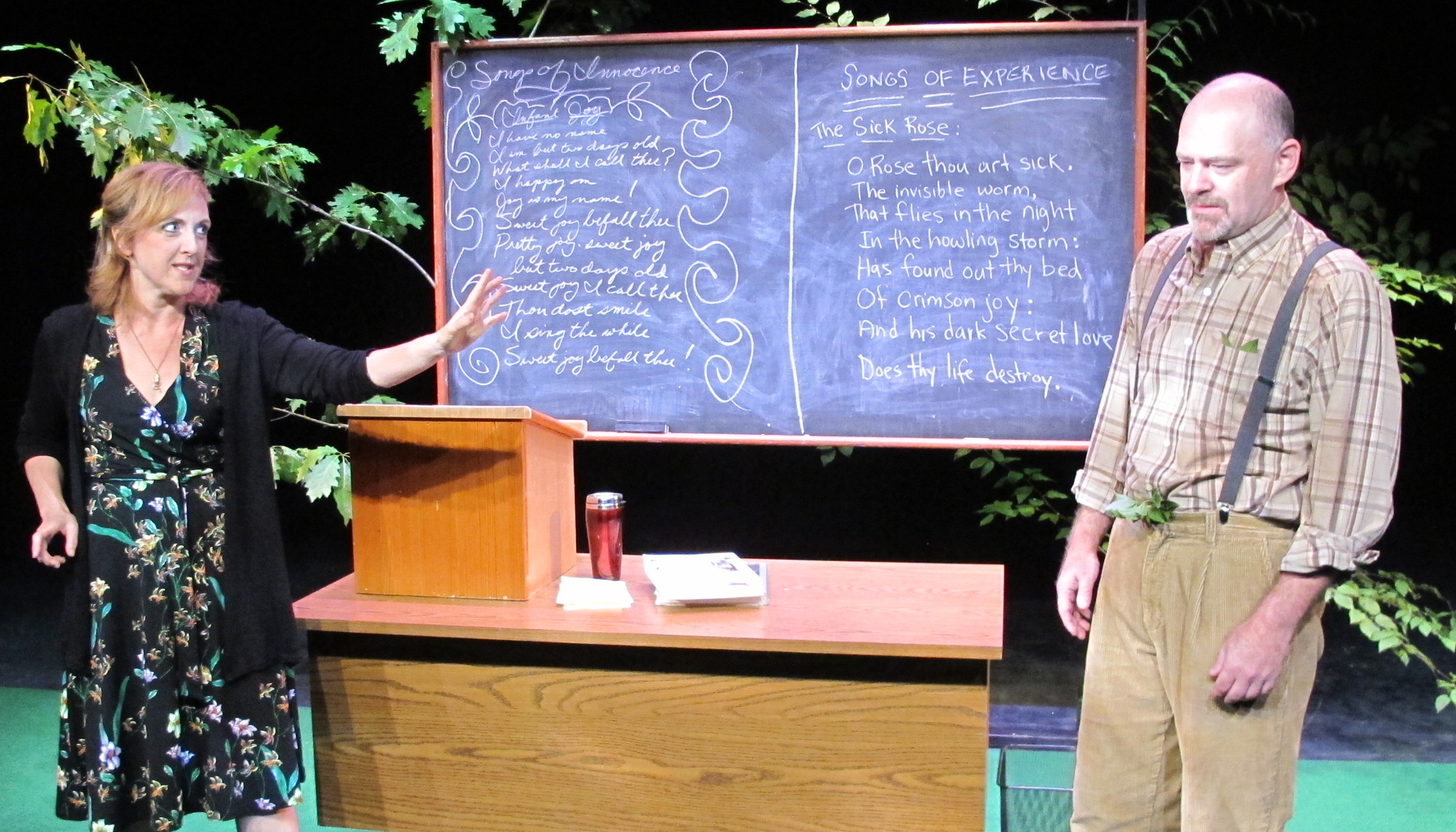 REVIEW: “There Is A Happiness That Morning Is” at Bridge Street Theatre

Imagine a play about the poetry of William Blake, one of the most complex writers ever known, written in rhymed couplets (like Blake’s poems), featuring a pair of actors portraying university professors who have been lecturing on this poet for the past fifteen years.  Bridge Street Theatre, developing a reputation for presenting highly inventive plays with unusual subjects, has taken on this challenge with their production of There is a Happiness That Morning Is by Mickle Maher—and succeeded beyond all expectations.

Poet, painter and illustrator, Blake (1757-1827) developed a system of illuminations—intricate pieces of artwork that he printed along with his poems.  Ignored by his peers, he is now considered to be one of the greatest contributors to English literature and art.  In 1789 Blake published (and illustrated) his Songs of Innocence, written about children or in their voices, followed in 1794 by Songs of Experience, companion poems that showed the “Two Contrary States of the Human Soul.”  In the latter collection, the speaker becomes a prophet, warning his readers of the dangers of religion, monarchy, corruption and repression.

The set of There Is a Happiness That Morning Is features a classroom where Bernard Barrow (Brian Petti) lectures on Blake’s Songs of Innocence, while Professor Ellen Parker (Molly Parker Myers) lectures on Songs of Experience.  (Coincidentally, or perhaps not, Barrow and Parker happen to have been the last names of the notorious outlaws Bonnie and Clyde).  As the play begins, both teachers, having engaged in a secret twenty-year love affair, are called upon to apologize for their behavior of the previous evening, when, in the midst of reading Blake’s poetry en plein air, they removed their clothing and made passionate love as their students watched.  Though Blake would have cheered them on, they have been told by the president of the school (Steven Patterson) that if they don’t make things right, both their jobs and the future of the school are in jeopardy.

The play is fascinatingly unpredictable as the lovers, during their separate lectures, analyze two of Blake’s poems and share with their students their conflicting interpretations of the previous night’s incident.  The staging is skillfully choreographed by the director (John Sowle), as two lectures given in the same classroom at different hours interweave before our eyes.  Playwright Maher has obviously done an enormous amount of research on Blake’s style of poetry, the spirituality he associates with the natural world, and his bleak vision of civilization.  The more one knows of Blake, the more meaning can be derived from the play and its celebration of language and imagery.  Yet, Blake believed that his work could be appreciated by everyone:  the cognoscenti as well as the everyman.  This is evident in the work of Professor Kenneth Koch, who successfully taught some of Blake’s poems to children.  And to appreciate Bridge Street’s production, no familiarity with Blake is required.

The performances of Myers and Petti are, in a word, extraordinary.   Bernard is obviously glowing (in rhyming couplets) about the “Happiness That Morning Is” after a night of love with Ellen, as he finds the linguistic and emotional equivalent in Blake’s Infant Joy:  “I happy am, Joy is my name.”  He wants his students (the audience) to learn the most important lesson that Blake teaches:  “Love makes all the difference.” Petti’s joy is manifest in his voice, his body, and in the way he pulls leaves out of his pockets (courtesy of Michelle Rogers’ costumes) and flings them about the stage.  John Sowle, doing double duty as a set designer, also brings the forest (the Garden of Eden?) into the classroom, with a green rug and shrubbery surrounding the blackboard.

Ellen’s reaction contrasts starkly with Bernard’s:  she resents  President Dean for demanding that they publicly apologize, causing them to feel shame for expressing their feelings.  She finds an equivalent rage in Blake’s The Sick Rose, which is being destroyed by an invisible worm’s dark and secret love.  “An agent of all that Blake called ill:  the Secret and the Dark. Invisible. . . So yes, he’s just like Dean.”  Ellen’s avalanche of curses attacking Dean and all he stands for is variously funny, tragic, and shocking.  Both actors handle the language in the play as if it were the most normal thing in the world to speak about subjects as profound as love and death in contemporary verse.

Part of the surprising turn of events that conclude the play is an original song that Bernard used to perform when he was a folk singer.  It begins:  “Come fall down on this bed just once, And all but once, this once, my heart will die.”  But Ellen objects:  “love dies to resurrect and prove its magic”. . . “it dies to live to die to live again.”  It’s a hopeful message from a long ago poet to his modern day interpreters, finding its way into a play that deserves to be seen and seen again.

THERE IS A HAPPINESS THAT MORNING IS runs from September 6—16, 2018 on Thursdays, Fridays and Saturdays at 7:30 and Sundays at 2:00 at the Bridge Street Theatre.  Tickets may be purchased online at  thereisahappiness.brownpapertickets.com or call 518-943-3818.