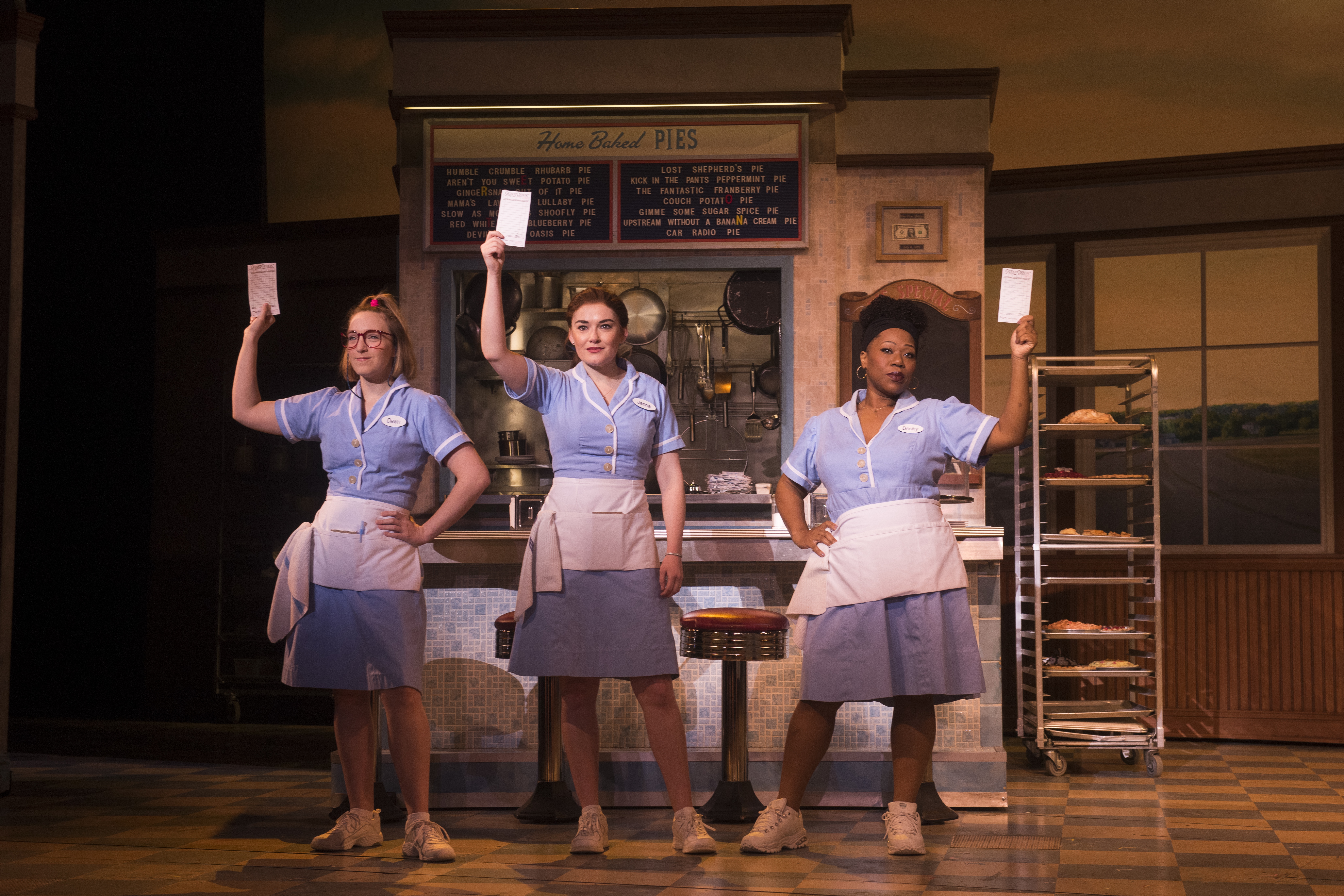 I remember the 2007 independent film, Waitress, well, and with a tinge of sadness. A charming and whimsical story of a young woman whose ingenious pie-making skills help guide her away from her abusive husband, I remember it so vividly because its writer, director, and co-star, Adrienne Shelly, was murdered in her New York office in 2006, just months before the film’s release.

Because the charm of the indie film stemmed in part from a poignant sense of intimacy established by Ms Shelly’s writing and direction, I had difficulty imagining how this small story would adapt to the musical theater without becoming unrecognizable.

Remarkably, Jessie Nelson (book) and Sara Bareilles (music and lyrics) have created a thoroughly charming concoction that manages to fill the stage (even in a big theater like Proctors) and maintain the feeling of intimacy so important to the original story.

The cast is entrancing. As the eponymous waitress, Jenna, Christine Dwyer is at once fragile and strong, as an actress and as a singer, and seems to effortlessly command the audience’s affection. Equally charismatic and appealing are her two comrades-in-arms, waitresses Becky (the uproarious Melody A. Betts) and Dawn (the adorably goofy Ephie Aardema). As Jenna’s abusive, controlling husband, Earl, Jeremy Woodard manages to be menacing in a way that anchors the show in reality, yet doesn’t deflate the sense of optimism that carries the show. The actor, and, of course, the creators of Waitress, have managed to maintain a fine balance between darkness and whimsy that is essential to the show’s success.

Steven Good plays Dr. Pomatter, the obstetrician/gynecologist with whom Jessie falls in lust, as tall, dark, handsome, tongue-tied and clumsy. It is the latter two qualities that soften the ick factor we might assign to the doctor-patient affair. While Jenna and Dr. Pomatter have a relationship that would be off putting, at the very least, in real life, the whimsy and abundant humor that infuse Waitress allow us not only to suspend our disbelief, but to acknowledge the essential goodness in each of the lovers, and to understand that nobody will suffer as a result of their affair.

Jeremy Morse as Ogie, Dawn’s lovably eccentric boyfriend, was adored by the audience for his zaniness, as was Ryan G. Dunkin as Cal, whose nascent relationship with Becky causes his evolution from gruff loudmouth to a hunk o’ burning love. As Joe, the restaurant’s owner, Richard Kline’s curmudgeon with a heart of gold was as touching as he was funny.

One of the clever ways in which the production managed to maintain a feeling of intimacy was to place five musicians on stage (Robert Cookman, the music director, also played keyboards; Lilli Wosk, the conductor, also played piano; Tom Jorgensen, drums; Lexi Bodick, bass; Nick Anton, cello and guitar; and Ed Hamilton, guitar). As I have written before about Proctors, the music was amped up so high that I was unable to hear some of the lyrics. (So high, in fact, that the man seated in front of me placed his hands over his ears during every song, thereby obscuring my view as well. I can’t fault him; the volume was painful to me, too.)

Scott Pask’s set design, a very authentic-looking diner that morphs into a dingy apartment to a doctor’s office and back again to a diner, was ingenious, as was Ken Billington’s lighting design.  Also deserving of kudos are Suttirat Anne Larlarb’s smart and colorful costume design and Lorin Latarro’s smart, inventive choreography.

While I love a good dessert, and even have, on occasion, ordered it in lieu of dinner, I’ve always preferred cake to pie. In fact, most of the pies I’ve sampled I’ve found to be too sweet and rather monotonous in texture. But as we were waiting for Waitress to begin, my companion and I were chatting, and the subject turned to pie. I started to say that I didn’t care for it…then I remembered a dinner party I attended some years ago. The hostess, a professional baker, served a warm homemade sour cherry pie for dessert. I remembered her mentioning that she’d picked the cherries herself the day before. That sour cherry pie was luscious. The crust was light and flakey, and the juxtaposition of sour cherries with the slightly sugary ingredients in the filling was what, to my mind, made it so good. I think the same can be said of Waitress: the story is, in many ways, harsh, but the alchemy that results from the sum total of its ingredients makes it irresistible.

WAITRESS at Proctors is part of the 2018–2019 Key Private Bank Broadway Series.