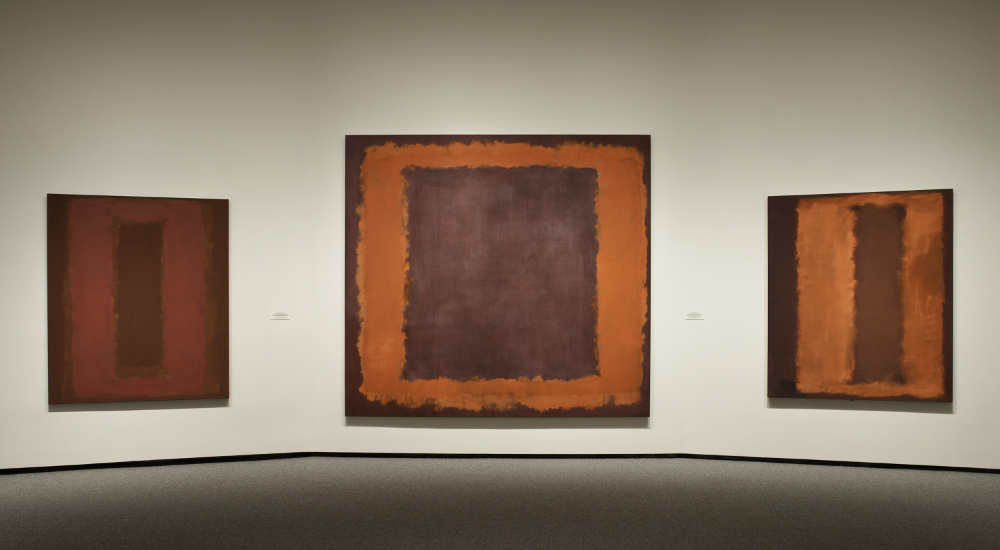 “What do you see?” is both the opening line and the penultimate one in John Logan’s play, Red, now on the boards at Oldcastle Theatre.

The difference between the fine arts – painting and sculpture – and the performing arts – theatre and dance – is that the former have a period of stasis, while the latter are constantly changing and completely ephemeral. They can be recorded via audio or video, but the live moment is there and gone. Even the people who experience a live performance each perceive it from their own physical, intellectual, and emotional point of view. When a painter puts down his/her brush and declares the work complete, then it stays in that form until time and the elements eventually destroy it. While each person views it through his/her individual lens, the object itself stays the same.

Logan presents the artist Mark Rothko (1903-1970) as a fragile and insecure man who lives for, with, and in his paintings. During the two year period 1958-1960 depicted in the play, Rothko, then in his mid-50s, was working on a series of murals for the swanky Four Seasons Restaurant in the newly constructed Seagram Building on New York’s Park Avenue, one of his first major and lucrative corporate commissions. Logan’s Rothko is beginning to feel the pressure of the new generation of artists coming up while facing the fact that his cohort is beginning to fade from public interest, and, in some cases, dead.

Logan’s Rothko spends almost all of the play looking at and talking about the series of large paintings he is working on for the Four Seasons. The audience doesn’t see any of Rothko’s work, but I include photographs of the existing paintings from the Seagram series, sections of which are currently on display in the Tate Modern Gallery in London, the Kawamura Memorial DIC Musuem of Art in Japan, and in the National Gallery of Art in Washington, DC, so that you can see that they are indeed predominately red.

At the Kawamura Memorial Museum of Art in Japan.

At the National Gallery in Washington, DC.

At the Tate Modern Gallery in London.

Rothko, played by Oldcastle stalwart Peter Langstaff, expounds endlessly and forcefully on the topics of art, color, impermanency, mortality, ambition, jealousy, and so much more to his hapless young assistant Ken, played by Brendan O’Grady, who made his Oldcastle debut as Edmund Tyrone in Long Day’s Journey Into Night.

I was surprised to learn that O’Grady’s character had a name, since Rothko never asks it of him nor refers to him by it. That right there establishes the non-existent relationship between the two men. Rothko talks, and Ken listens. When Ken talks Rothko generally tells him that he is wrong. Finally, Ken gives Rothko a good dressing down, which is quite cathartic for Ken and the audience, but it really is too little too late, and Rothko hears nothing.

While it won many awards in 2009/2010 when it first opened in London and then New York, Red is more of a “tell” than a show. Sometimes the judges of major theatre awards vote in favor of straight plays with lots of big words and ideas instead of actual drama, just as judges of musical theatre often reward spectacle over ingenuity and creativity. There are some really interesting ideas about art in the script, but there are so many that they zoom by, like being caught in a kaleidoscope of butterflies – individually they are beautiful and unique, but collectively they are overwhelming.

I have seen and reviewed Red once before, and while it was a much more emotionally dynamic production, I still thought the play itself was overwrought. This time, without the emotional fireworks between the two men, I was far less intrigued. O’Grady actually brings more passion to his performance than Langstaff, while Rothko is clearly supposed to be an intellectual and emotional superior to the young painter. Ken is a fictional character, and yet we learn more of his backstory than Rothko’s.

The set by Wm. john Apperlee is both quite busy – there are tables full of painting supplies, a phone (rotary dial!), a coffee pot, etc. flanking the playing area – and very plain – the upstage walls are completely unadorned. Only in the central section of the play, the only part with any exciting physical activity to watch, Rothko and Ken paint a very large canvas red. They do so while a piece of classical music plays – part of Cory Wheat’s excellent sound design – and they must time it so that they finish painting as the music concludes, not two seconds before or two seconds after, but simultaneously. In the performance I attended they nailed it! I am sure they have the routine down pat and will hit their mark when you go too. It is a thrilling bit of theatre, and, alas, none of Oldcastle’s publicity shots feature it.

Rothko insisted on the lighting be very low in his studio, and so David V. Groupe has made it so on the stage for large chunks of the play. I often joke that some day I will forget to take off my sunglasses when I enter the theatre and complain needlessly that the lighting is very dim, well, my sunglasses were in my purse and the lighting WAS very dim. Be warned.

I found Ursula McCarty’s costumes to be sadly bland. There was nothing about the way the actors dressed that told me what time period this was or who they were. Granted, painting is a messy activity, and both the actors and the costumes have either a pinkish tinge or red splotches on them by the end of the play, so the costumes have to be washable and there may be multiples on hand in case of catastrophe, but particularly in the early scenes, when character, time, and place are establish and before the paint starts flying, a little more period detail would be helpful.

There are many highly over-rated, award-winning plays out there, and sadly Red is one of them. While it does pose some fascinating questions about art and creativity, it ultimately lacks action and interest.