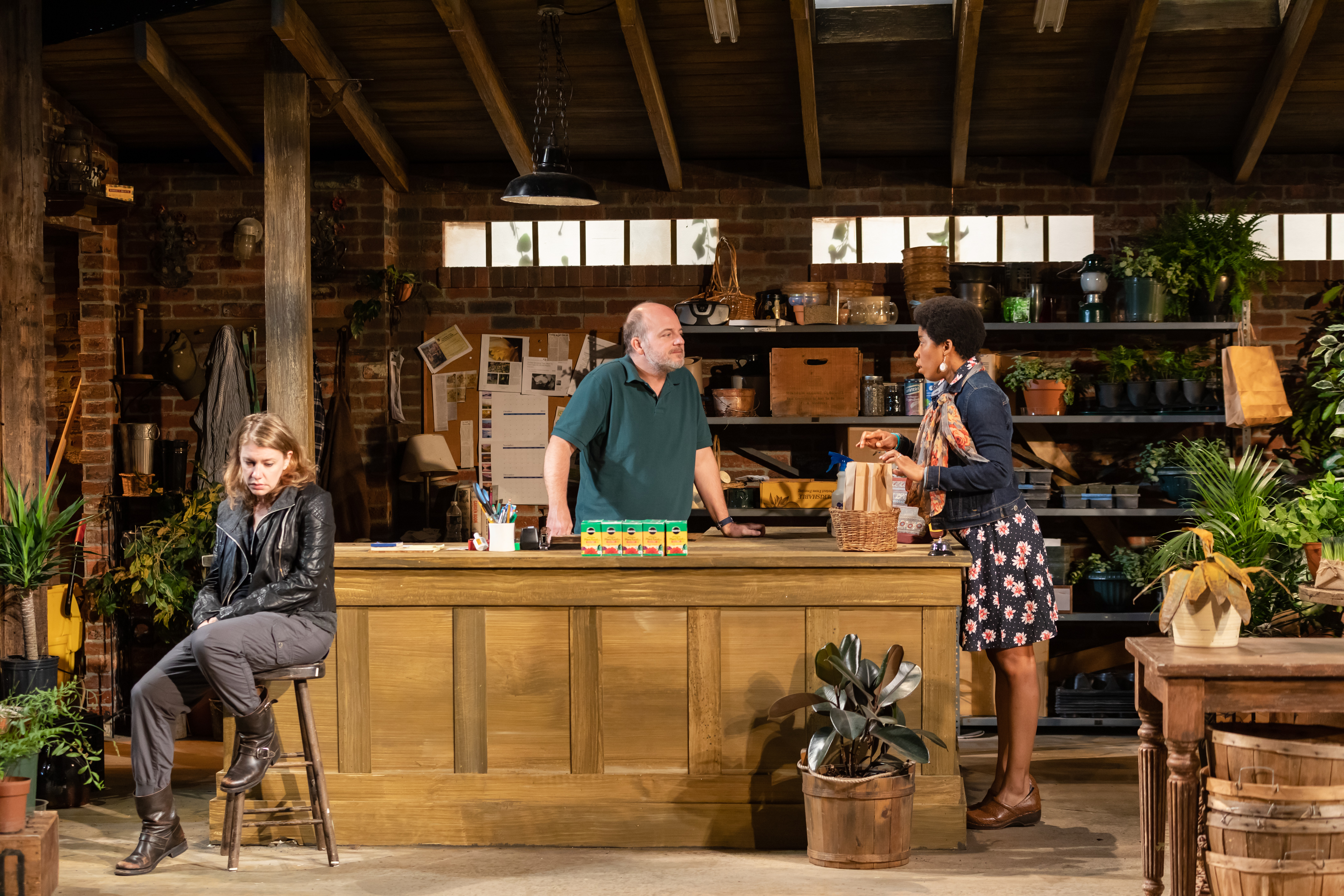 We are so blessed with the close and productive relationship between playwright Theresa Rebeck and the Dorset Theatre Festival, where she has developed at Dorset more than half a dozen plays, most have which have gone on to productions at other major regional theatres and in New York. I am quite sure DIG will join that happy throng.

Rebeck’s plays are mysteries – not in the Agatha Christie Who-Dun-It? Mold, but in a subtle introduction of pieces of the puzzle over the course of the play which build both tension and audience involvement. What will happen next? Which shoe will drop? What sudden insight will we glean that illuminates plot and character?

There is a murder that figures large in the plot, but that’s not what this play is about. It is about a woman and how she allows the men in her life to dictate who and what she is. It is a fascinating psychological portrait of her, and of them.

Being a mystery I cannot give too much away, particularly about the character of Adam (David Mason) who has only one scene late in the play, so that is all you will hear of him, other than my assurance that Mason gives a chilling performance. His scene is a pivotal point in the play and he plays it perfectly.

Rebeck has directed her own script, which takes place in a plant shop named DIG. The owner, Roger (Jeffrey Bean), is a fastidious man, alone by choice, long-obsessed with plants, particularly the herbaceous, non-flowering variety. He is much more interested in tending the plants than selling them, so his business, located on a dying Main Street, is the peaceful, plant-filled refuge he requires.

When the show opens Roger is dickering with his life-long pal Lou (Gordon Clapp) about an ailing plant that Lou has clearly neglected for weeks, if not months. Can it be revived? Roger will give it a try. There is also a woman, we later learn her name is Megan (Andrea Syglowski), in the shop, huddled up miserably on a stool downstage left. She is silent. Who is she? Why is she there? What has wounded her so deeply?

Everett (Greg Keller) is the lackadaisical stoner Roger employs to drive his delivery truck, and who often lurks oddly in the leafy corners of the shop. Molly (Sarah Ellen Stephens) is a woman who actually wants to buy plants from Roger. In what seem sometimes to be dangerous or inept intrusions into other characters’ lives end up bringing useful change to their stagnant routines.

At first I feared this was going to be a “Secret Garden” formula show, where the power of nature heals and renews the characters for a happy ending in which love blooms along with the flowers, the lame walk, and the birds chirp their encouragement to the last. I was wrong. Change does occur, and there is a hopeful ending, but along the way wounds are cleaved open and bandages are in short supply.

Syglowski’s Megan is the central character in DIG and her performance is electric. She is by turns in and completely out of control of the emotions that dig at her soul. Watching her twist and turn at the behest of her father (Clapp), Adam, and even eventually Everett, you see how toxic masculinity works at women from the inside as well as the outside. She believes them and allows their truth to become hers.

Bean also gives a masterful performance. It is seems likely that Roger falls somewhere on the outer edges of the Autism Spectrum, but he has channeled his passion for plants into an acceptable career and lifestyle, so he functions well. Rebeck leaves open questions of whether Roger is ready for a relationship.

The other three men are not open to change in their lives. Lou is too wounded to let down his guard; Adam is too angry; and Everett is too lazy. Keller felt a little old to me to pass as the stoner kid – he is a convincing stoner but he is not a kid – and he played Everett just a little too sympathetically. Late in the play he comes this close to committing quite a serious and ugly crime, and yet in the performance I attended he didn’t elicit the outrage from the audience that Everett’s actions deserved.

Stephens plays Molly earnestly. She has genuine appeal and becomes a comforting presence in this world of hurt.

Christopher and Justin Swader’s is also playing an important role in this production. Take some time to admire it before the show starts. It is awash with greenery – you can almost smell the vegetation and you can smell the vermiculite. The plants form a backdrop and a shield. A place to hide in the embrace of nature artificially potted and presented to tame what is wild.

It is beautifully lit by Philip S. Rosenberg. The set has a ceiling, which is unusual because it makes lighting so much trickier. Rosenberg’s lighting is subtle and evocative, but also specific in its indication of source and direction.

Fitz Patton’s sound design puzzled me. There were times when sound would swell and the lights would change – generally during a monologue from one of the characters – and I knew that Patton and Rebeck were trying to tell me something, but I couldn’t figure out exactly what. At other times the soundscape was clearly used to give voice to a character’s emotions, or even to allow the plants to “speak.”

The costumes are all contemporary streetwear, except for the beekeepers suit that makes an appearance midway through, and Tilly Grimes has done a good job of allowing the clothes to quietly indicate the passing of time without being obtrusive.

DIG is not an easy play and it is certainly not one to bring the kids to. It is tantalizing and terrifying while also being quite gentle and often funny. A grown-up play about important ideas that is also thoroughly entertaining.

The Dorset Theatre Festival production of DIG runs from July 11th through July 27th at the Dorset Playhouse, 106 Cheney Road in Dorset, VT. The box office may be reached by calling (802) 867-2223 ext. 101, Tuesday through Saturday, 12 – 6 pm. For more information, or to purchase subscriptions and tickets online, visit www.dorsettheatrefestival.org.