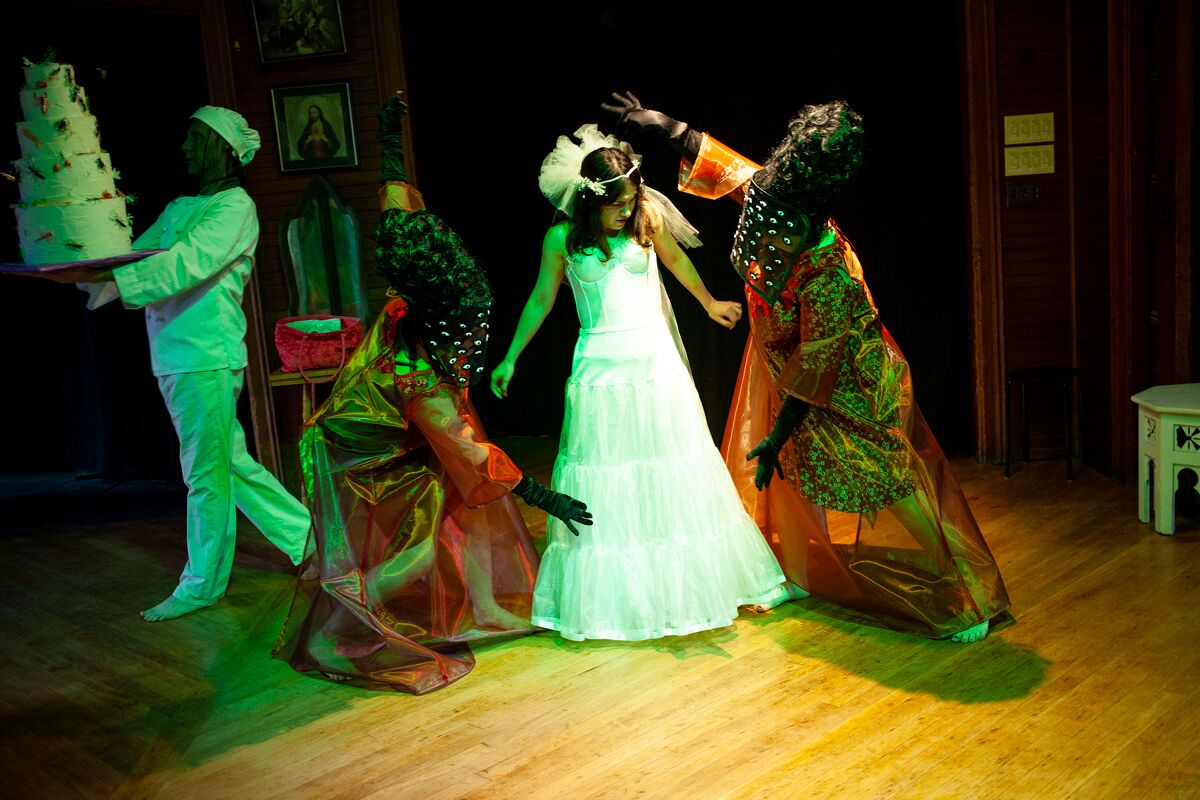 “Elderly” folks like me may remember the late Dudley Moore’s classic skit (if you don’t you can watch it HERE) where he plays multiple variations on the Colonel Bogey March and then is unable to end it. He plays coda after coda after coda, but they never resolve. The Living Room Theatre’s production of Lucy’s Wedding, written and directed by Randolyn Zinn, has that same rambling, unwieldy feeling and is equally hilarious. Comedy run amok.

LRT presents just one production each summer at the Park-McCullough House in North Bennington. The production is site-specific, and the actors cast live, eat, and rehearse together, I offer this little preface so that you understand the dynamic of this group. There are lots of new plays on the boards this summer, but Lucy’s Wedding is nurtured by its creator and owned by the performers in a unique way.

The play has been evolving over many years. Initially it was a 10 minute play, then a one act, and now it is a full length two act play. I was unable to decide which were the original 10 minutes content, but Act II is clearly the add-on. Act I, which takes place on Lucy’s wedding day, remains a self-contained work. Act II, set the following Christmas, merely updates us on the character’s lives five months later. Luckily they are engaging characters, winningly played by a lively and talented cast.

Last season LRT presented Lucy Caldwell’s Irish adaptation of Chekhov’s Three Sisters. Lucy’s Wedding is also the tale of three sisters, and it sprang originally from Zinn’s own thoughts and memories of growing up as one of three sisters – although she is quick to point out that the play outgrew its autobiographical roots long ago.

This is most adamantly a play about women. The central family is a matriarchy consisting of Gaga (Kirk Jackson), her daughter Peggy (Karen Trott), and Peggy’s three adult daughters Merle (Sara Canter), Doreen (Colleen O’Connor), and Lucy (Julia Valen). Gaga’s husband, Otto, and Peggy’s husband, Farley, are dead, although the latter does make some ghostly appearances in the person of LRT co-founder Allen McCullough . Doreen’s husband, Donald, chooses not to be present. Lucy’s fiancé Cal (Michael Broadhurst)and his brother Eliot (Will Gallacher) are the only living male characters on stage.

I will not give away the plot but suffice it to say that these are definitely people who put the “fun” in “dysfunctional” with broad slapstick comedy. The family is devoutly Roman Catholic and Gaga has memories of her mother and life back in the “old country,” the Alsace-Lorraine, an alpine region between France and Germany.  \There are the usual siblings squabbles and rivalries. Merle is the sister who has escaped the Midwest, moving to New York to pursue a career as an artist. Lucy still lives at home with her mother and grandmother but that will change with her marriage. And while Doreen is married with a home of her own, she lives close by and still identifies herself strongly with her birth family since she and Donald are childless.

The play begins with Lucy dreaming, and over the course of the show all the other characters recount or reenact dreams of their own, often to side-splitting comic effect. Towards the end of Act I Cal and Eliot perform an hilarious version of “Lucy in the Sky with Diamonds” with delightfully mangled lyrics as part of a fight scene, and towards the end of Act II Gaga’s dream of dancing with Jesus comes true. (Yes, Jesus makes a cameo appearance. Why not?)

Over the course of rehearsals in New York and then in North Bennington Zinn has encouraged and allowed each performer to really inhabit their characters, so all of the performers are perfectly suited to their roles – and vice versa. Some of the actors, notably Trott, have been involved with the show for a long while; some, like Broadhurst and O’Connor, have been with LRT for several seasons, and others are newcomers. Each brings their own unique spark of life to the production.

Two performances are notable for their physicality. Broadhurst is a fine physical comedian and his Cal is just a whirlwind of anxiety and energy, whether sober or, in Act II, totally sloshed. While Broadhurst is perpetual motion, Jackson, with his silver hair neatly clipped to the side, is tightly constrained as the wheelchair-bound Gaga, who demands that she be integral to every refuses to be excluded from the goings-on.

Since LRT usually performs in non-theatre spaces, there are no sets. Three different spaces within the Park-McCullough Carriage Barn are used – one for each act and a third for a very brief scene that takes place just before the start of the second act – and the audience is moved rather than the scenery. Chase McCloud has designed the lighting, which I cannot really comment on since I saw a matinee performance and natural daylight washed out many of the effects. His sound design, however, was smart and well executed.

The play is set in the 1980’s and many of the costumes harken back to that gaudier, chintzier time in fashion. Costumes have been loaned by Sherry Recinella and Emily White is credited with “Special Costumes,” while Richard McPike is the creator of the “special undergarment.” My companions and I actually differed on which undergarment we thought was the special one, which proves that there’s more than one exotic underpinning on display!

Lucy’s Wedding runs two and a half hours with one intermission, and it could easily have that extra half hour trimmed off. Tightened up this would be a really hilarious show. In its current form it is a happy meander from one character’s moment to the next, with many hearty laughs along the way.

CAST: Julie Valen as Lucy, Will Gallacher as Eliot, Karen Trott as Mom/Peggy, Kirk Jackson as Gaga, Sara Canter as Merle, Colleen O’Connor as Doreen, and Michael Broadhurst as Cal.