REVIEW: “If I Forget” at Barrington Stage 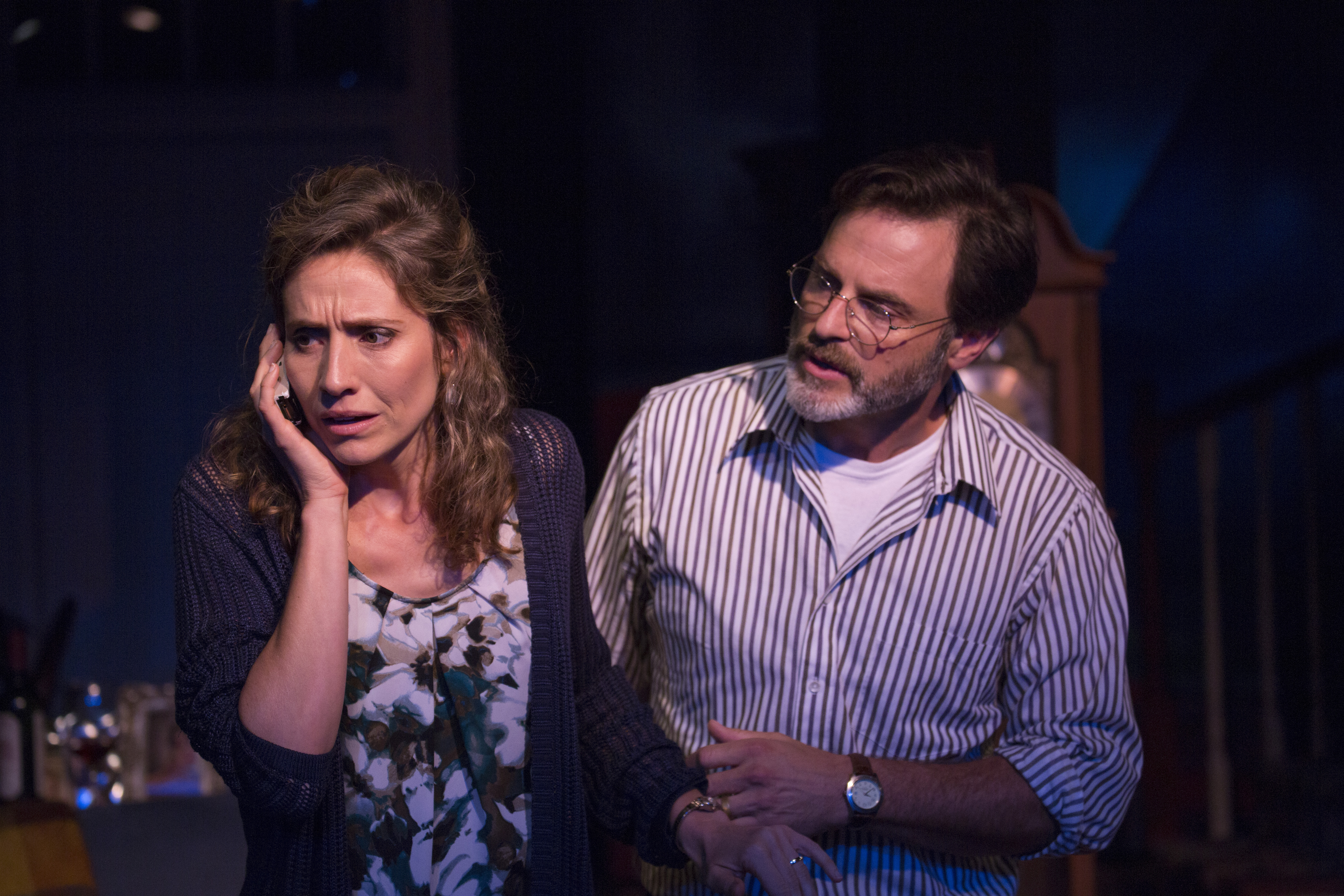 REVIEW: “If I Forget” at Barrington Stage

“If I forget thee, O Jerusalem, let my right hand forget her cunning.

If I do not remember thee, let my tongue cleave to the roof of my mouth.”

This lament from Psalm 137 serves as the inspiration for If I Forget, the drama by Steven Levenson (the Tony Award-winning book writer of Dear Evan Hansen), now playing at Barrington Stage Company.    Utilizing the familiar structure of a dysfunctional family whose members gather to celebrate (in this instance) the 75th birthday of the widowed patriarch, with secrets revealed along the way, Levenson  explores Jewish-American identity, Israeli-Palestinian relations, exploitation of the Holocaust, the political and financial support of American Jews for Israel, and secularism vs. religious tradition. A heavy load for one play!

In the course of a lengthy first act, packed with exposition, we meet three siblings, two spouses, one teenager and their father/grandfather in his white upper-middle class neighborhood of Tenleytown, in Washington D.C. The character driving the action is Michael Fischer (J. Anthony Crane), a Jewish Studies professor up for tenure, whose most recent book, the controversial Forgetting the Holocaust, is a plea to forget the murder of the six million Jews and its culture of death that has manipulated the Jews into feelings of victimhood.  Fischer maintains that the Holocaust has replaced religion with nationalism, propelling American foreign policy to support Israel’s anti-Palestinian policies and distorting American Jewish life, discourse and culture.  (An actual book with a similar theme, written by American political scientist Norman G. Finkelstein, The Holocaust Industry:  Reflections on the Exploitation of Jewish Suffering was published in 2000, the year If I Forget takes place.)

Ironically, Fischer’s talked-about but unseen daughter Abby, a troubled young woman brought up in their secular home with no religion, is visiting Israel as a participant in the Birthright Program, and becomes  consumed with its history, feeling more at home there than in America.  Fischer’s father Lou (Robert Zukerman), the aforementioned patriarch, who took part in the liberation of Dachau half a century earlier, shares with his son his shattering memories in a powerful monologue.  These two characters—Abby and her grandfather—in combination with Michael’s nephew Joey (Isaac Josephthal), present the counter-argument to Michael’s book:  Joey, a sixteen-year-old who misses his cousin Abby and their deceased grandmother, emphasizes the importance of remembering as a way of keeping loved ones alive.

In the second act, six months later, Levenson ties together the two plots, highlighting the significance of memory on the one hand, and the bickering over how to pay for their unresponsive father’s care after a debilitating stroke, and the coming inheritance, on the other.  Lou is sitting on a virtual gold mine—a store (now leased for a pittance) that he and his parents built and nurtured, currently worth millions.  What prevails:  history and tradition, or the material future?

Levenson has created believable, recognizable characters and given them so much background and specificity that he could have written several plays given this material.  His dialogue, laced with humor, is sharp and authentic, leaving us with considerable food for thought.

The ensemble performance is quite effective, with two standouts:  J. Anthony Crane’s Michael, who becomes more and more desperate as his   job, his finances and his daughter’s mental health are increasingly at risk; and Laura Jordan, Michael’s sister Holly, who is not only loud, brassy (outfitted entirely in red, thanks to costume designer Elivia Bovenzi)) and funny, but also sympathetic as she faces her own hurdles.  Lena Kaminsky, as Michael’s younger sister, Sharon, explodes with resentment for having given up her career (as a kindergarten teacher) in order to care for her elderly parents, a thankless job that the other siblings don’t share.  Kathleen Wise plays Ellen Manning, Michael’s gentile wife, the outsider who has been unfairly blamed for not converting (she was willing, but her husband dissuaded her).  Howard Kilberg (Mitch Greenberg), Holly’s milquetoast of a husband, has a wonderful scene with his brother-in-law, speaking about himself only after receiving a promise that what he says will be kept in confidence.  Isaac Josephthal’s “tough guy” Joey and his mother Holly rub each other the wrong way, but like his stepfather, he confesses his real feelings and fears to  Michael; while Robert Zuckerman’s Lou, wounded as he is by the tenor of Michael’s book, nevertheless adores his son and refuses to blame him directly for his absence or his beliefs.

Director Jennifer Chambers expertly conducts this family drama both emotionally (every scene is fully realized) and physically.  We watch the actors’ choreographed movements as they glide from scene to scene (five per act) on this beautifully rendered set (by John McDermott), packed, like the play itself, with minute details, stretching from upstage to downstage, right to left, including every room on the first floor of the house and an upstage staircase.  Palmer Hefferan’s musical interludes and Scott Pinkney’s lighting accompany the scene changes, matching the mood of each one.  The only glimpse of a less realistic, more surreal element is the colorful upstage wall, which perhaps complements the otherworldly ending.

If I Forget, long and difficult, is not for the faint of heart.  But if one can be open to hearing its many points of view, it is well worth attending.

If I Forget runs from August 1—September 8.  Tickets may be purchased online at barringtonstageco.org or call 413-236-8888.