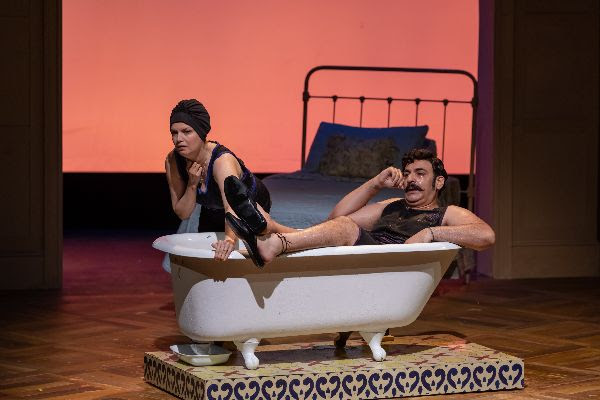 When I tell people that the most produced playwright writing in the English language, aside from William Shakespeare, is a woman, they get all excited.

When I tell them that that woman is Dame Agatha Christie they immediately deflate, “Oh,” they say, disappointment tinging their voice, “She doesn’t count.”

And I want to wring their necks because this is the way women are ALWAYS treated! She’s the most produced playwright in the English language (except for WS) and she DOESN’T COUNT?? You can love her plays or you can hate them, but you cannot diminish her accomplishment. And yet that is just what her first husband, Col. Archibald Christie, is about in the course of Heidi Armbruster’s new play, Mrs. Christie.

Female writers continue to fight an uphill battle for acceptance and support, as is witnessed by the fact that this world premiere production at the Dorset Theatre Festival was birthed over the past few years in the Dorset’s Women Artists Writing Group, a diverse group of mid-career female theatre artists, founded in 2016 by Armbruster and Mary Bacon, who stars as a thirty-something Agatha Christie, facing a turning point in her life and career.

I am happy to report that, under the spritely direction of Giovanna Sardelli, Mrs. Christie is a most entertaining mélange of biography, sparkling with magical realism and theatrical wit.

In 1926, Agatha Christie’s mother died, her marriage fell apart, and she disappeared for ten days. Meanwhile, here in the 21st century, the fictional Lucy (Jennifer Mudge) attempts to cope with her grief by heading off to Styles* for an Agatha Christie fan gathering where she meets a smarmy assistant to a Christie scholar, William (Stephen Stocking) from whom she swipes clues to a “lost” Christie play. As the action progresses, Lucy becomes more and more immeshed in the world of her favorite author as she and another conference attendee, the elderly Jane (Susan Greenhill), race to solve the mystery of the lost document and stay one step ahead of William.

I can imagine no one better than the incandescent Mudge as the imaginary Lucy and the incisive Bacon in the title role. The three other women on the stage – the beguiling little Betsy Hogg as Agatha Christie’s assistant Charlotte “Carlo” Fisher and various servants named Mary, the elfin Greenhill as Jane, and the sultry Hannah Rose Caton as Col. Christie’s mistress, Nancy Neele, and a modern gal named Chloe – also light up the stage, leaving Stocking and Michael Frederic, as Col. Christie, rather in the shadows.

The man who does brighten up the proceedings is Sevan Greene’s Hercule Poirot. Poirot was Christie’s first sleuth – her very first published mystery “The Mysterious Affair at Styles” (1920) featured M. Poirot and his moustaches. Here he joins Agatha during her ten day sojourn from society – and in the bathtub – while tens of thousands of Brits scour the countryside for her body.

Agatha feels she has failed in the accepted roles of wife and mother while her successful run as a devoted daughter has concluded. Col. Christie is the Darrin Stephens to her Samantha, demanding that she give up what makes her unique (and what makes them good money) if she wants to be his wife, as if that is a prize to be coveted. Can she make a new life alone? Can she be “just” a writer? Can she withstand what was then the public disgrace of divorce?

While Agatha has been wife, mother and successful novelist, Lucy has never found herself. Her life hasn’t had a first act, can she reinvent herself for a second? Can she even raise within herself the will to try?

Despite this rather dire description of the leading ladies’ predicaments, Armbruster has a twinkle in her eye throughout and there are many good laughs in this play. Alexander Woodward’s set and Stacey Derosier’s lighting help establish time and place swiftly and in ingenious ways. Sarah Nietfeld has designed some great roaring twenties looks for Bacon, Caton, and Hogg, while giving contemporary Lucy a saucy style all her own.

The soundscape by Fitz Patton also successfully melds period and modern music without being jarring or offensive. In fact the overall effect is sprightly and effervescent, in keeping with the visuals created by Sardelli and the frothier aspects of Armbruster’s script.

Under Dina Janis leadership Dorset is building a reputation as a nurturing home for female artists. This is the second world premiere by a female playwright on the Dorset schedule this summer, following on the heels of the thrilling DIG by Theresa Rebeck. Wendy MacLeod’s Slow Food closes the season. Rebeck, who has a home nearby, has premiered a half dozen new works at the Festival, and their Pipeline Series of play readings fostered the development of The Cost of Living by Martyna Majok, which went on to win the Pulitzer Prize for Drama in 2018.

Whether or not you think Agatha Christie “counts,” you should definitely count Mrs. Christie among the shows you see this season.

The box office may be reached by calling (802) 867-2223 ext. 101, Tuesday through Saturday, 12 – 6 pm. For more information, or to purchase subscriptions and tickets online, visit www.dorsettheatrefestival.org.

* The home in Sunningdale, Berkshire, that the Christies named “Styles” after the house in her first published mystery, is not open to the public. One of her later homes, Greenway House in southern Devon, is.