REVIEW: “Joseph and the Amazing Technicolor Dreamcoat” at the Sharon Playhouse 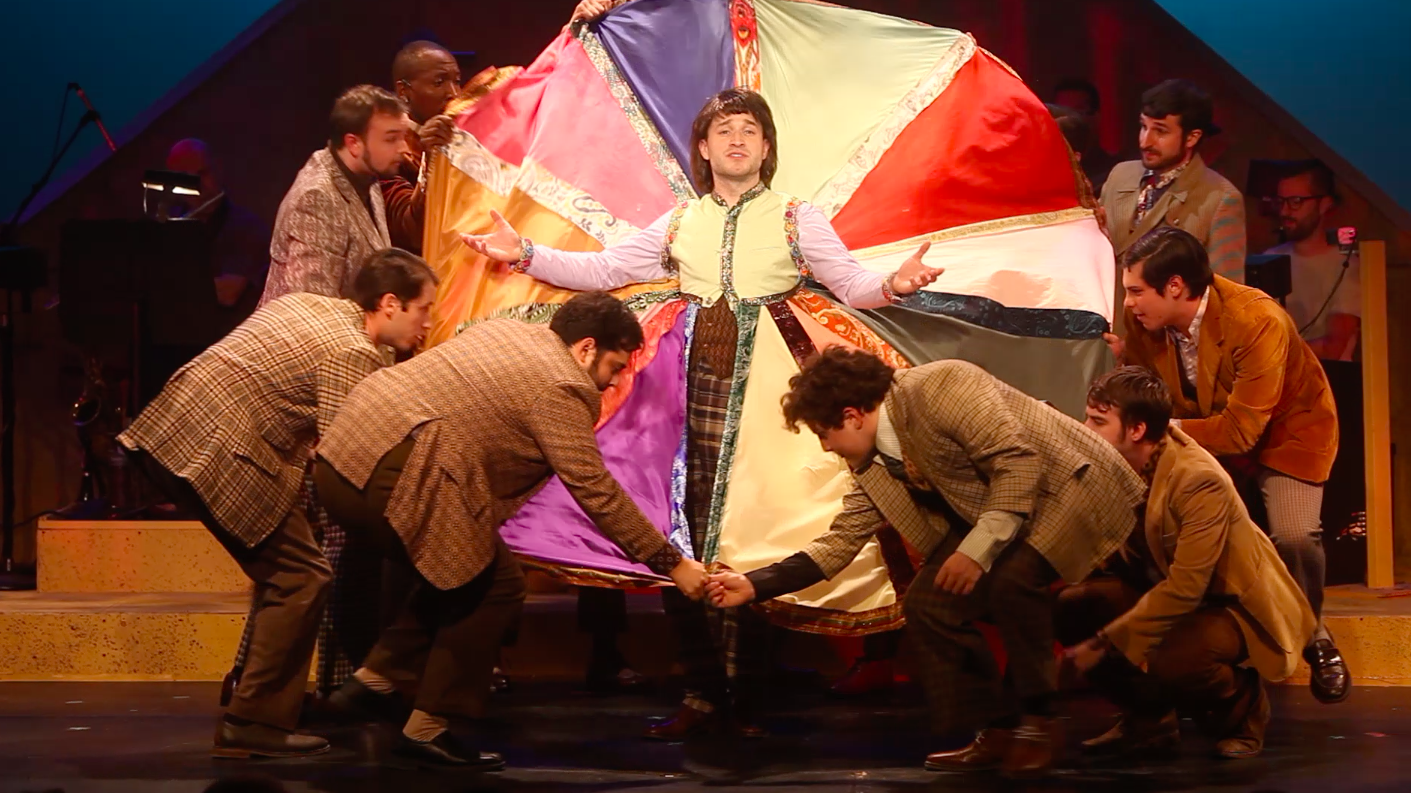 REVIEW: “Joseph and the Amazing Technicolor Dreamcoat” at the Sharon Playhouse

Joseph and the Amazing Technicolor Dreamcoat is the first successful show written by Andrew Lloyd Webber and Tim Rice; it was followed by smash hits Jesus Christ Superstar and Evita.  First produced in England in 1974 it had its initial Off-Broadway showing in 1981 and then to Broadway the following year, receiving myriad Tony Award nominations, but no wins.  It has become a favorite of high school, college and regional theatres and is now at the Sharon Playhouse, Sharon, Connecticut, in a rollicking, audience pleasing production.

Based on the “coat of many colors” story in the Bible’s “Book of Genesis,” the show is a sung-through musical utilizing various styles including rock, western, Charleston and calypso.  This version plays loose with the original adding some shtick, different takes on some of the songs, i.e. “Those Canaan Days” (Canaan being where Joseph’s family lives) performed with French accents, throwaway comments and more.  The basic plot, however, follows the events as written in The Bible.  Joseph is the eleventh of twelve brothers born to the patriarch Jacob who favors Joseph and gives him the “Amazing Technicolor Dreamcoat.” Joseph reads dreams and informs his siblings that he will rule over them; they, in order to thwart his pronouncement, decide to kill him but instead sell him into slavery in Egypt.  After a series of misadventures he is recommended to the pharaoh because of his ability to interpret dreams and becomes the ruler’s favorite advisor.  When a famine strikes Canaan Jacob and the brothers travel to Egypt to beg for food.  After testing them Joseph forgives them and the family is reunited.

The director/choreographer Russell Garrett has staged the show with energy that goes off the scale.  There are very few moments when the stage is quiet as the cast of twenty- six, including a children’s ensemble, sings beautifully in solos and chorus numbers, dances with over-the-top vitality that shakes the theatre, and acts flawlessly.  Most of the show employs the ensemble and the children, who are very disciplined performers.  Every scene and all twenty-one musical numbers are exhilarating.  An audience can get tired from being so euphoric!

The show starts quietly with the narrator (Merrill Peiffer) and the children (Myles Crain, Lorelei Gnerre, Hariett Luongo, Jordan Masselli, Sayde Mendell and Ceanna Weiler) then moves into the rousing “Prologue” led by Peiffer.  She (the role was originally written for a male) relates the story with a powerful voice and a strong stage presence. Peiffer soars when she sings “Jacob in Egypt.”  Max J. Swarner’s Joseph exudes arrogance as he addresses his brothers, but after being imprisoned by Potiphar (Bill Morris) for allegedly attempting to seduce Mrs. Potiphar (Michelle Lemon,) he sings the powerfully plaintive “Close Every Door” and is humbled.

One of his cellmates, Pharaoh’s butler (Sam W. Snyder,) for whom Joseph interprets a positive dream, is freed and informs the Pharaoh of his chance meeting with Joseph.  The Pharaoh (Michael Glavan) a look-and-sound alike for Elvis Presley sings “Song of the King” and “Stone the Crows” in a dynamic imitation of the late king of Rock and Roll.  Glavan almost steals the show.

Thomas P. Swetz’s simple set of steps and platforms and the aisle in front of the first row is aesthetically utilitarian allowing Garrett to create interesting stage pictures and to effectively group voices.  The color of the center stage pyramidal shape is, of course, sand and the backdrop is the blue of an Egyptian sky.  In addition to dramatically lighting the stage, designer Jamie Roderick uses this backdrop to project various motion-filled graphics that underscore the content of scenes.  David Jordan Baxter’s enormous number of costumes range from plain to luxurious with colors that complement those of the set.  Musicals in which everyone is wearing a microphone can often be too heavily mic-ed.  That is not the case with Graham Stone’s design in which virtually every word can be understood.

Sharon Playhouse under the administration of Robert Levinstein and Alan M-L Wager has an energy and artistry it lacked for several years before their arrival.  This production of Joseph… and the earlier ones this season – Crazy for You and Beauty and the Beast – have drawn repeated full houses.  What this low-budget theatre has produced these past two years is astounding.  Sharon is now a theatre not only for the immediate community but also the entire Berkshire cultural scene.  It’s worth the trip!