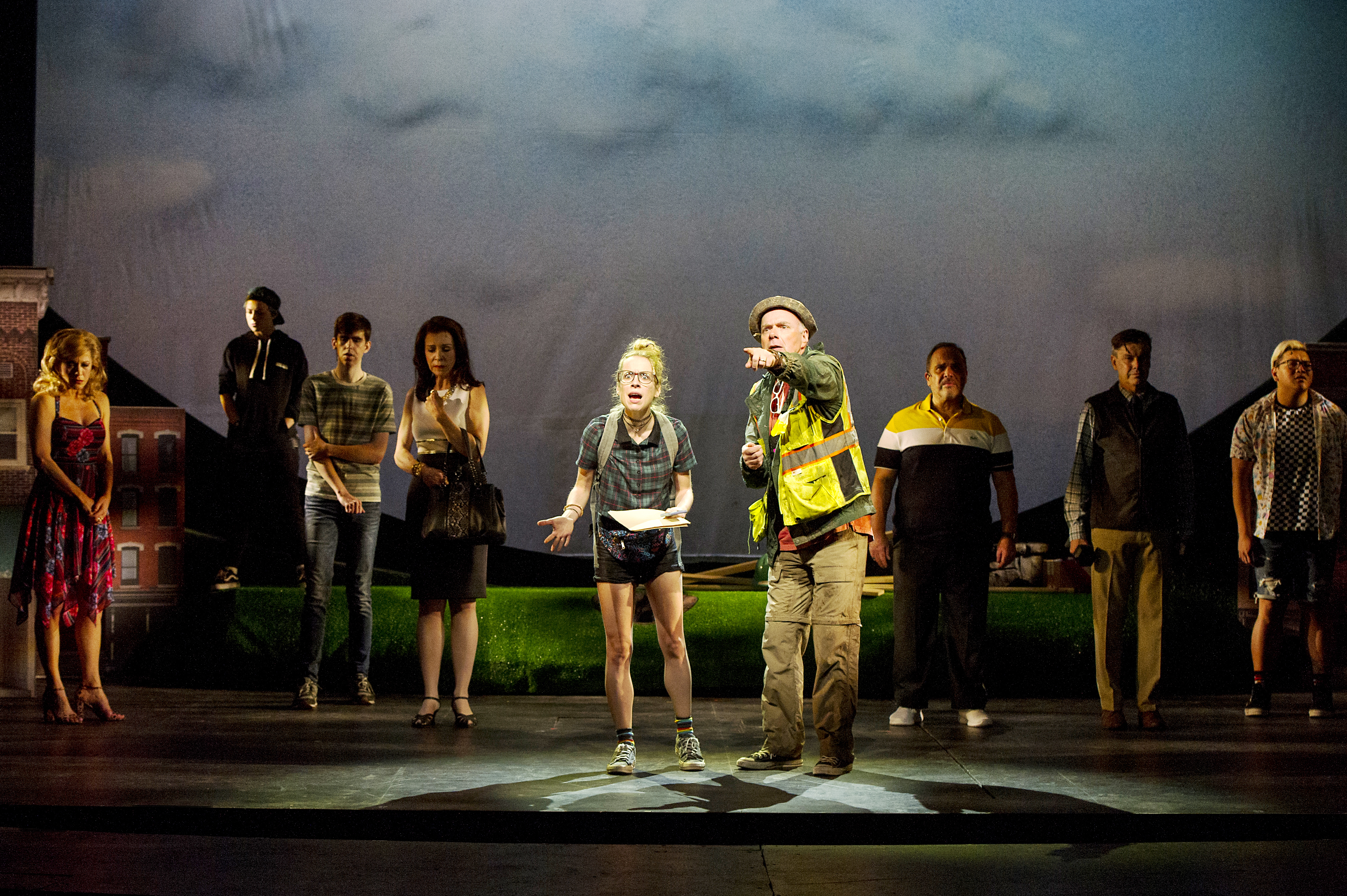 A musical about fracking?  Is it doomed to share the fate suffered by entertainments on such unlikely subjects as Anne Frank or Anna Karenina, the Musicals:  obscurity and a critical chorus of “What could they have been thinking?”

Fall Springs by Niko Tsakalakos (music and lyrics) and Peter Sinn Nachtrieb (book and lyrics), now playing at Barrington Stage Company, comes to the Berkshires via BSC’s Musical Theatre Lab, bringing with it the offbeat comedy and edgy excitement we have come to expect from previous productions by the Lab.

Offering musical theatre writers a place to develop their work, The Musical Theatre Lab was created after BSC workshopped and premiered William Finn and Rachel Sheinkin’s The 25th Annual Putnam County Spelling Bee (2004), which went on to a successful Broadway run. The Lab, under the mentorship of Finn, the two-time Tony Award-winning composer/lyricist, has subsequently produced fourteen world premieres and six workshops of new musicals.  Additionally, as a member of the writing faculty at the NYU Tisch Graduate Program in Musical Theatre, Finn has brought the work of some of his exceptional students in his annual Songs by Ridiculously Talented Composers and Lyricists You Probably Don’t Know But Should. . . Among this group were Joe Iconis, whose musicals The Black Suits, Broadway Bounty Hunter and Be More Chill (recently directed on Broadway by Stephen Brackett, who staged Fall Springs) were produced at BSC, and Niko Tsakalakos, whose Pool Boy premiered there in 2010.  Both of these composers/lyricists have returned to BSC to perform concerts, to the delight of local audiences.

Fall Springs has been in development for seven years, with help from the Creativity Fund (a program of New Dramatists), Ars Nova and TheaterWorks Silicon Valley’s 2013 Writer’s Retreat and as such, this World Premiere arrives at Barrington Stage’s Boyd-Quinson Mainstage in more polished and professional shape than most other Lab productions.

The satiric plot concerns the problems facing Fall Springs, “the fourteenth most aesthetically pleasing smallish town [in the United States] not including locations near water or mountains,” which is sitting on one of the largest Essential Oil reserves in the country, famous for its lotions and creams.  Unfortunately, since drilling is no longer extracting enough of the buried oils, Mayor Robert Bradley (Matt McGrath), desperate for a way to boost production in time for the town’s Semi-Centennial Celebration, eagerly embraces fracking, brainchild of Beverly Cushman (Ellen Harvey, a deliciously evil villain dressed in devil’s red, thanks to Costume Designer Emily Rebholz), the CEO of the Fall Springs Oil Drilling Corporation.  Cushman, who has discarded the disturbing data collected by the Mayor’s recently deceased wife, a geologist studying the effect of drilling and overdevelopment on the solidity of the ground, easily cajoles the Mayor’s council of advisors (all single parents) to go along with her idea, but cannot persuade their children.  It’s up to the brilliant Eloise Bradley (Alyse Alan Louis), daughter of the Mayor, who continues her mother’s research, despite being threatened by her father (“No science in this family”).  With the help of the town’s genius/vagrant, Noland Wolanske (Ken Marks), former professor of geology, Eloise endeavors to save Fall Springs.

The play is part Little Shop of Horrors, with its campy caricatures of good vs evil, its prescient chorus of young people, and the nerd who musters the courage to express his feelings; part Enemy of the People (or Jaws, referenced in the script), whose main characters are driven by greed to attract the income provided by tourists, ignoring the danger threatening them as well as the townspeople, and part disaster film, focusing on survivors of a calamity facing their imminent deaths who finally acknowledge the importance of family, of forgiveness, of unity–to quote Tsakalakos/Nachtrieb: “one home, one world, one people.”

Director Stephen Brackett and choreographer Patrick McCollum maintain a breakneck pace at first, demanding high energy from their skilled cast and musicians, but slow the action down in the second, more introspective and treacly act, trapping most of the characters on a small raised stage built for the Semi-Centennial Celebration as the town sinks around them.  Scenic designer Tim Mackabee has taken on an enormous challenge, adding to his traditional wing and drop set a horizontal crack  the width of the stage, deep enough for unlucky townspeople to fall through.  David Lander’s eye-popping lighting effects and Sound Designer Josh Millican’s rumbling earthquakes accompany the smoke and fire emanating from this crevice.

Characters fall into two camps:  corrupt parents vs. ethical children (and a geologist), each of whose personalities are distilled through the music and lyrics.  Examples of the many well-delivered musical references to the current political atmosphere in our country are Matt McGrath’s Mayor, a two-faced politician, so busy convincing us of his heroism in “Save One Life,” that he nearly allows a child to drown, and Harvey’s Beverly Cushman, whose rendition of “More” perfectly exemplifies her avaricious nature.  The four teenagers (all age 17),  as members of a local rock band, sing powerful warnings like “Sinking Into Oblivion,” that fall on deaf ears, while Louis’ Eloise, in “Gimme Science,” futilely implores the adults not to ignore data and research.  Sam Heldt’s Nerdy Felix Cushman, in his wonderful breakout song “The Bass Player’s Lament,” accuses Eloise, whom he loves, of faking her threats about an approaching earthquake, and in “The Birds Have Come Home,” Marks’ Wolanske sings:  “Ever think that we may be the ones that have caused the way things are?”

Fall Springs is a dark and lively comedy that approaches a serious issue through pulsating music and strong performances, delivering a forceful punch that might make Al Gore proud.

Fall Springs runs from August 9—August 31 on the Boyd-Quinson MainStage, 30 Union Street in Pittsfield, MA.  Running Time:  2 hours 30 minutes, including intermission. Tickets may be purchased online at barringtonstageco.org or call 413-236-8888.