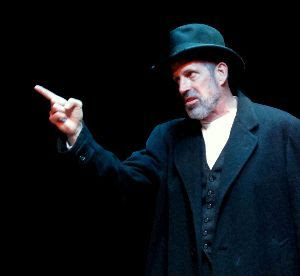 Does anyone remember Tubal?  Aside from Shylock, he’s the only Jewish character in Shakespeare’s The Merchant of Venice; in fact, they are the only two Jews in the entire Shakespeare canon.

In 1998 Gareth Armstrong, British actor and playwright, wrote and began performing his solo play, Shylock, a take on The Merchant of Venice from Tubal’s point of view.  Premiering at the Salisbury Theatre in the United Kingdom, where Armstrong, an Associate Artist, had played Shylock in Shakespeare’s play, this award-winning production has traveled to over fifty countries and has been translated into dozens of languages.  In 2007, Armstrong directed Steven Patterson in Shylock at the Orlando Shakespeare Theater, the first time the playwright allowed it to be performed in English by someone other than himself.  Patterson, presently an Associate Director of the Bridge Street Theatre in Catskill, is now reprising Shylock in repertory with Roxanne Fay’s Thrice to Mine, an exploration of the historical Lady Macbeth, through August 25th.

In a 2007 interview for the Orlando Shakespeare Theater, Patterson and Armstrong discussed the transition from a British production to an American one, eliminating Anglicisms and searching for American equivalents. Patterson explored the rich history of early 20th century immigrant Jewish humor, vaudeville, and mid-century Borscht Belt comedians for his interpretation of the character of Tubal, a jokester and narrator of the piece.  Both performers emphasized the advantages of an intimate theatre (like the one at Bridge Street), considering that Tubal speaks directly to the audience.

Armstrong’s script deals with the historical persecution of the Jews,  offers an analysis of the character of Shylock and how he was depicted by various actors through the ages, examines fictional and biblical sources for The Merchant of Venice, and presents scenes from the play, including much of the climactic trial.  The playwright, lapsed Presbyterian son of a minister, describes his work as a revisionist approach to Shylock, who was regarded as a comic villain in Shakespeare’s time, but nowadays is considered more of a victim.  Armstrong compares him to any marginalized person today who, as the subject of discrimination, reacts negatively when cornered.

Do not assume from this description of Shylock that the presentation of the material is dry or lacks entertainment value.  On the contrary, Patterson is a dynamic and amusing storyteller and an exceptionally physical performer, whose Tubal is constantly on the move, interacting with his listeners, who occasionally respond to his questions and comments.  Every theatrical element is effective in this production: from John Sowle’s set–a round platform, a desk, coat rack and a couple of useful trunks behind which Patterson emerges in period wigs, masks, hats and coats, thanks to Michelle Rogers’ costumes–to Sowle’s creative lighting, to Matthew Given’s impressive music and sound design.

Patterson easily transforms from Tubal to Shylock to several other characters in Shakespeare’s play. The most powerful and moving moments in this production are those in which Patterson brings Shylock to life as he fights for his rights and grieves for his losses.  Would that we could see him portray this character in a full production of The Merchant of Venice!

Whether are not you are familiar with the play or the historical references, Tubal will lovingly explain all you need to know.  Advice to the theatergoing public:  make your way to Bridge Street Theatre and catch this performance of Shylock before it ends on Sunday.

SHYLOCK runs from August 15—August 25 in Rotating Rep with THRICE TO MINE at the Bridge Street Theatre.  For dates and times go to BridgeStreetTheatre.org or call 518-943-3818.  Tickets may be purchased at BrownPaperTickets.com or call 800-838-3006.