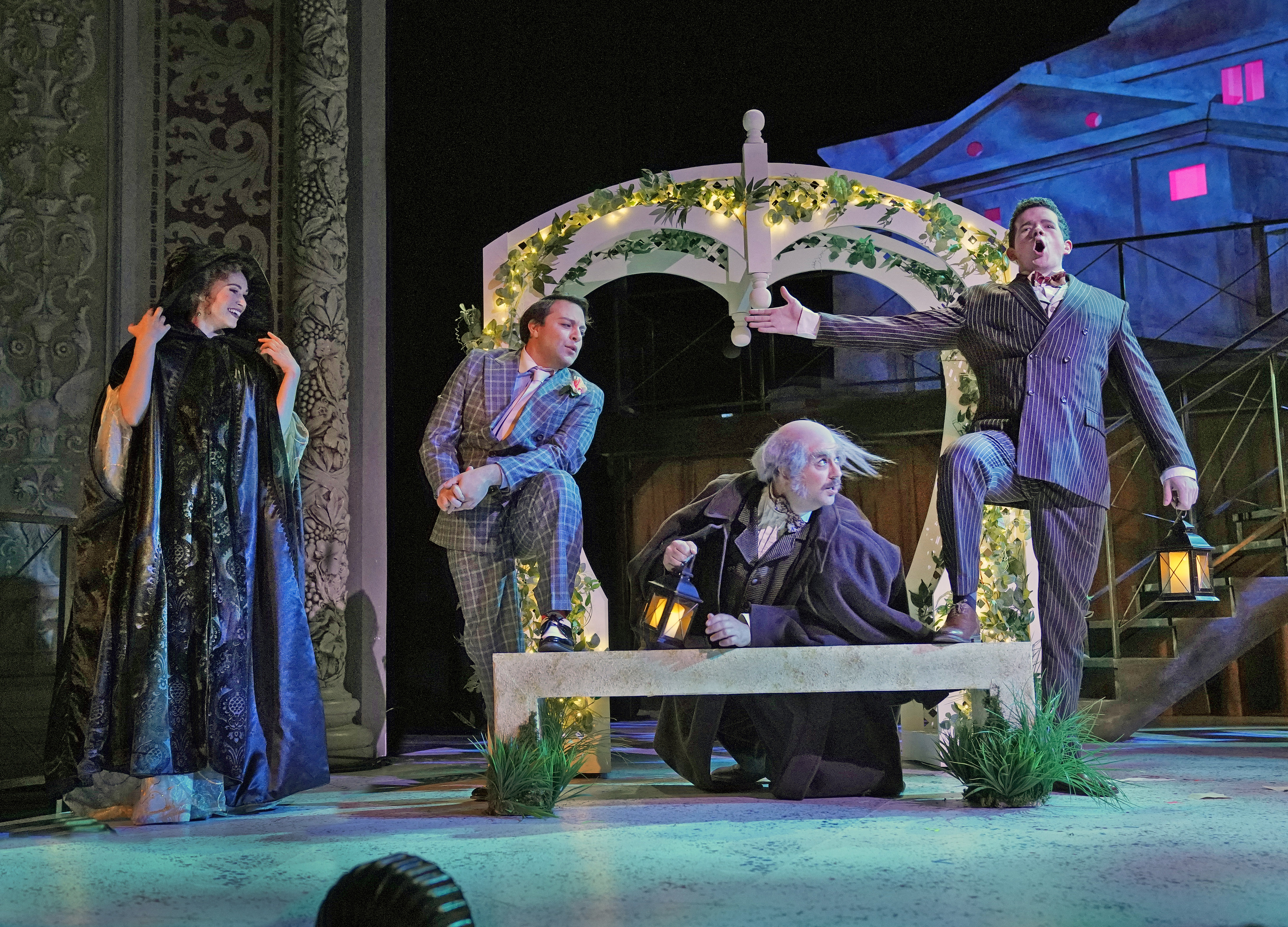 Comedy, arguably one of the two greatest human gifts – the other being music – is a timeless art. Picture an arrow pointed on two sides, flying through spacetime, picking up a Greek comedy here, a courtly farce there, a Gilbert and Sullivan here, a Seinfeld there, a Marx Brothers here, a Mel Brooks there. As long as we are human, we will laugh at pompous people getting their comeuppance, pratfalls and pranks, sex and surprises.

Jonathon Loy, who directs the Berkshire Opera Festival’s effervescent production of Donizetti’s Don Pasquale, gets it. To Donizetti’s already stalwart opera buffa (comic opera) plot, which involves the aforementioned high-born being brought low, he adds all the right ingredients – an ensemble of gifted comic actors and singers, an assortment of wigs, a few perfectly timed costume reveals, and some interesting lounge chairs – to make the comedy, well…sing.

The eponymous Don, an elderly bachelor hoping to keep his wealth in the family (a clever musical reference to The Godfather comes up early in the production), has arranged a marriage for his nephew, Ernesto. But Ernesto loves the young ingenue Norina and rejects his uncle’s plans. In revenge, Pasquale plots to disinherit Ernesto and, with the help of his personal physician, Doctor Malatesta, to find himself a young bride instead.

Little does he know that the double-dealing doctor is scheming with Ernesto to humiliate the Don. Malatesta presents Pasquale with his sister, “Sofronia,” actually Norina in disguise. After a hastily arranged sham wedding, the new bride goes rogue, shall we say, and by the end a thoroughly defeated Pasquale is ready to consent to the true lovers’ wedding.

Opera buffa has its roots in the Italian commedia dell’arte, known for its assortment of stock characters; each of Don Pasquale’s has such an equivalent. Loy makes an interesting choice by costuming Ernesto in a checkered suit, hinting at making him the trickster Harlequin, although he also shares traits with the melancholy lover, Pierrot. Norina is the flighty Columbine, the wily love-interest of Pierrot/Harlequin. (Think of Susanna in Mozart’s Marriage of Figaro.) Pasquale is Pantalone, the elderly butt of numerous jokes, and Malatesta is Scapino, a maker of mischief.

Loy gives the cast ample room to play to these types while bringing their own individuality to the roles. All of them sing, and act, their hearts out. It would be almost unfair to single out any one of the four stars. Craig Colclough holds down the fort as the hapless Don, combining great physical humor with a solid bass-baritone voice. Emmett O’Hanlon, as Malatesta, has a rich baritone voice and catlike movements. As Norina/Sofronia, soprano Deanna Breiwick is ravishing in every sense of the word. Her powerful, athletic voice rang out effortlessly through the most elaborate coloratura passages.

And then there was tenor Matthew Grills, as Ernesto, who elicited peals of laughter from his very first entrance, and whose voice, while not overpowering, was incredibly pure in tone. The Act Three aria he sings in the Don’s garden, calling out to his lover, and their subsequent love duet were simply gorgeous.

Probably not by coincidence, Ernesto’s aria is so similar in word and setting to the Major’s song in the final act of The Pirates of Penzance that it almost certainly was Gilbert and Sullivan’s inspiration. Spoofing nineteenth-century opera was as much the point of that pair as was sending up British politics and aristocratic mores.

This year the opera moved from the Colonial Theatre in Pittsfield to the Mahaiwe Performing Arts Center in Great Barrington. The stage was cramped, and the good-sized orchestra took up nearly half. That left room for the few well-chosen props, with a single backdrop suggesting Pasquale’s mansion and a balcony projected in front of it. It was fine. The intimacy of the space added to the experience. Brian Garman led the excellent instrumentalists and choristers.

Special mention goes to Cori Ellison, who wrote the English supertitles with some clever updates and also penned the fascinating program notes, which provide educational context for the musical evolution of Donizetti’s late masterpiece.

Loy and Garman, co-founders of the Berkshire Opera Festival, are in their fourth year, and they have brought something wonderful to our region, filling a gap we might not of known we had. Long may they prosper.