REVIEW: “Oklahoma!” at the Mac-Haydn Theatre 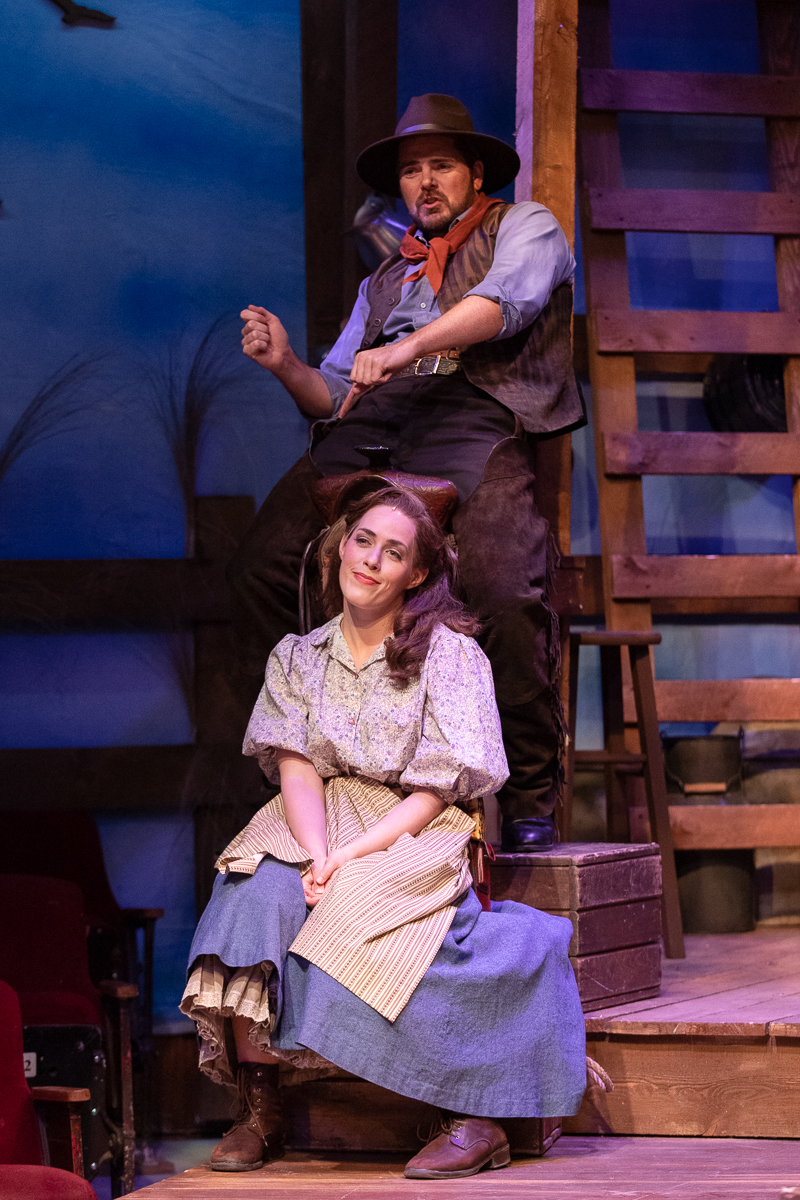 REVIEW: “Oklahoma!” at the Mac-Haydn Theatre

The first musical written by the team of Richard Rodgers and Oscar Hammerstein II, Oklahoma! opened on Broadway on March 31,1943. An box-office smash from the get-go, it ran for more than 2,000 performances. During the nearly 76 years since, it’s a fair bet that this deservedly celebrated American musical has been playing in a professional, community, and/or high school theater on any given day.

Oklahoma! has no plot, yet it set new standards, changing the Broadway musical forever. Building on the innovations of Show Boat, Oklahoma!’s  book and music are integrated, and as such, they advance the story. The show, light-hearted as it may seem by today’s standards, succeeded in evoking a spectrum of emotions from its audience, rather than merely amusing and entertaining in the way of musical revues of the time. The show was psychologically sophisticated for its day. As in opera, Oklahoma! offers recurring musical themes throughout, further connecting the book and music. A 15-minute dream ballet, famously choreographed by Agnes de Mille, examines Laurey’s conflicted feelings about the two very different men, Curly and Jud, who want to court her.

Set at the turn of the 20th Century, in Western Indian territory on the verge of becoming a U.S. state, Oklahoma! presents the love story of a fetching farm girl, Laurey (Meredith Lustig) and a handsome cowboy, Curly (James Benjamin Rodgers) against a backdrop of low-key rivalry among local farmers and cowboys. With its many references to the wide-open country with “plenty of air and plenty of room,” the small round Mac-Haydn stage is hard-pressed to suggest such open, wild, natural beauty, and Katie Johannigman’s choreography does not always succeed in collaborating on the illusion. Nevertheless, the vital young cast is populated by excellent singers and dancers, and it was a real treat to hear this beloved score delivered with such charm.

Meredith Lustig, beguiling as Laurey, with a voice beautifully suited to the role, seemed initially not to fully inhabit her character. When Curly stops by the farm and chats with Aunt Eller (a feisty, cheerful Cathy Lee-Visscher), we know, along with Aunt Eller, that he’s really looking for Laurey. James Benjamin Rodgers has a singing voice warm enough to swim in, and his “Oh, What a Beautiful Mornin’” could not have been more appealing. (Oklahoma! also was the first musical to open with one actor singing, rather than a high-kicking chorus number, and the effect is deeply felt; the audience members quickly connect with the actor.) When Laurey emerges from the house and spots Curly chatting with Aunt Eller, the two younger people tease each other in the manner of two smitten schoolchildren desperate to disguise their real feelings. Lustig came across as overly harsh and dismissive, and Aunt Eller’s asides to Curly about Laurey’s real feelings (“She’s crazy about you”) lacked the charm they would have had if Lustig had softened her tone just a little, or seemed flustered about her feelings, avoiding Curly’s eyes. In spite of that, Lustig’s sweet singing voice and her interpretation of Laurey as a confident young woman worked very nicely, and created an intriguing counterpoint to the other actors on stage.

As Will Parker, Andrew Burton Kelley is a hoot, and he is well-matched with Rachel Pantazis’s Ado Annie, the girl who “cain’t say no.” While Curly and Laurey have a smouldering sexuality, Will and Ado Annie are downright randy, and great fun to watch and listen to. (I will say I was surprised that Pantazis’s choreographed splits, with her two legs in the air, exposed more of Annie than was appropriate for the role; I hope for the talented Pantazis’s sake that Johannigman and/or costume designer Bethany Marx will remedy that.)

I thoroughly enjoyed William Taitel’s Ali Hakim, as (judging by their reception) did the rest of the audience during the performance I saw. Too often actors in this role conflate the humor with the Persian accent. Taitel managed create a more complex Ali Hakim, and he thereby elevated the humor. Also deserving of kudos is Rob Brinkmann’s dark, angry Jud Fry, who injected just the right amount of foreboding into the ensemble.

The long Dream Ballet seemed incohesive to me. It’s not an easy piece to choreograph, even less so considering Agnes de Mille’s historical connection. Perhaps the Mac-Haydn stage presents too great a challenge to replicate or suggest the de Mille choreography; perhaps the ballet should be shortened and simplified, although I don’t know if the rights to the play allow that option.

Andrew Gmoser’s lighting design enhanced and deepened the action, and I especially admired a starlit, expansive evening scene. I have complained over the years about poor acoustics in this theater, often because the orchestra seems to override the singers, but I’m very pleased to report that Music Director Jillian Zack, Music Supervisor David Maglione, and Sound Designer/Audio Engineer Nathan Schlitz’s work made the music “fit” the space, and I was able to enjoy every note from musicians and singers. Except for the aforementioned mishap with Ado Annie’s costume, I thought that Bethany Marx did an excellent job dressing the actors. Kevin Gleason’s mostly minimalist scenic design was just right for the stage.

It’s a pleasure to see and hear such a dynamic and talented ensemble of age-appropriate actors (that is, mostly young and just starting out) deliver the goods on a joy-filled show that has an important place in theater history.

For tickets and details please visit www.machaydntheatre.org or call the box office at (518) 392-9292.