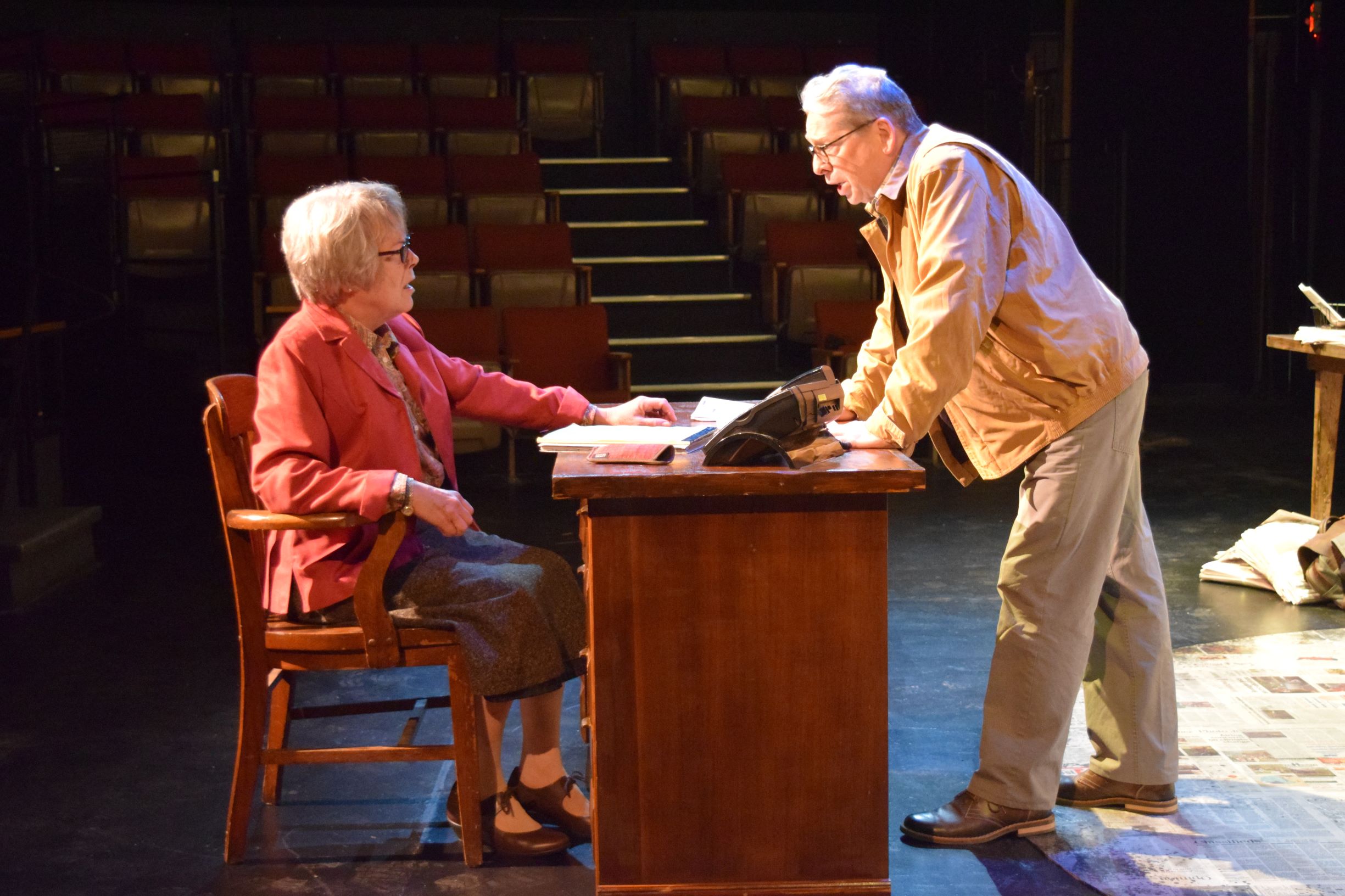 While all water sources are effected, the financial burden on those with wells are obviously larger than for those on town water/sewer hook-ups alike. And trying to sell real estate or attract new business (let alone retain existing ones) in a PFOA effected area is hopeless.

Fun stuff, huh? And very personal, timely stuff for the majority of Oldcastle’s audiences. Peterson had to find a way to package this story so that it wouldn’t be either depressing or enraging. So he has written the bad news – and there is plenty of it –as personal stories told by a variety of men and women, from single parents to state senators, all smoothly played by Patrick Ellison Shea, and Natalie Wilder. These monologues, which are undoubtedly fact-based but not verbatim transcripts of interviews of people affected, are slipped in between scenes of two young and eager journalists who, with the assistance of two wise elders of the town of Walloomsac, Vermont, buy the dying local daily newspaper and doggedly pursue “The Truth”.

This structure works to keep the play light and engaging, but should it be? These are actual life and death issues for people in this region, and at Oldcastle Peterson is preaching to the choir

I kept waiting for Clark Kent to wander in and help Jimmy Olson and Lois Lane catch the bad guys, the newsroom scenes are that clean and cute. And yes, it is adorable that the two young journalists are named Nick and Nora, but the parallels between them and Dashiell Hammett’s Thin Man sleuths are few and far between. I would have preferred them to be named Jimmy and Lois – the reference would be more accessible to contemporary audiences.

Ed Rosini and Halley Cianfarini are genuinely appealing as Nick and Nora, who Peterson has written as autodidacts devoted to the waning art of print journalism. While the script hints at romantic sparks it doesn’t follow through and the pair remain platonic colleagues. It is the older couple – Katherine Dwyer (Christine Decker) and Ethan Corcoran (Richard Howe) who have the love affair, one of many decades standing.  Nick and Nora convince Corcoran to buy the ailing Walloomsac Tribune, and he agrees to do so only if Dywer is brought back to the newsroom she ran successfully for decades.

The ease with which Corcoran and Dwyer agree to reengage with the teetering business of print media, and the immediate cordial relationship Dwyer establishes with Nick and Nora are a little too pat, but since that story is just the sugar coating for the water pollution crisis it is as well it doesn’t distract with any unnecessary drama.

I am always glad when older characters are allowed to have careers and romance, and I am also glad when women are shown in unquestioned  positions of power. In fact Walloomsac is a regular Themyscira with the mayor, the state governor, the scientists who test the water, and the EPA officials all referred to or depicted as female.

And if you are going to have a powerful older female character on your stage, Christine Decker is among the best regional actresses for the job. She plays Katherine Dwyer with warmth and chutzpah, and Ursula McCarty has given her very flattering costumes that just scream “successful Vermont businesswoman.” The rest of McCarty’s energies have been spent developing a wardrobe shorthand for Wilder and Shea’s many monologue characters.

Wm. John Aupperlee has designed a set full of playful print. The back wall is papered in newsprint (I was slightly annoyed that it was wallpaper with a repeating pattern rather than actual newsprint. The newspaper doesn’t even get to play itself on stage these days!) and Nick and Nora’s desks are cluttered with several decades worth of gadgets – books, typewriters, early PCs, laptops, telephones of various eras. McCarty has designed some costume pieces – notably a handsome jacket for Cianfarini – adorned with letters in a bold serif font.

In the second act we meet Chandler Tillsbury (David Snider), the former owner of the now closed factory that both enabled large chunks of the population to live comfortable middle class lives and poisoned their soil and water. Peterson has warned us repeatedly that there are no bad guys in this story, but by the end Tillsbury looks pretty darned culpable.

The play ends, but Peterson fails to deliver anything resembling an ending. Of course in real life there is no resolution to this tragedy and the story will spin itself out for generations to come, but on stage you need some sort of conclusion. Yet when the curtain call comes neither characters nor story have finished their arc.

This is the second time this season that I have reviewed a play written and directed by the artistic director of the theatre staging it, and this is the second time that I feel that the play could have been shaped better if additional eyes and ears were allowed into the production process.  This is a story that needs to be told and needs to be heard, so I hope that Peterson and Oldcastle continue to develop Water, Water, Everywhere… until it becomes an effective tool to advocate for much needed change.

Performances Wednesday-Saturday at 7:30 pm, with 2 pm matinees Thursdays and Sundays and a special matinee on Saturday, August 6. For tickets call 802-447-0564 or visit https://oldcastletheatre.org