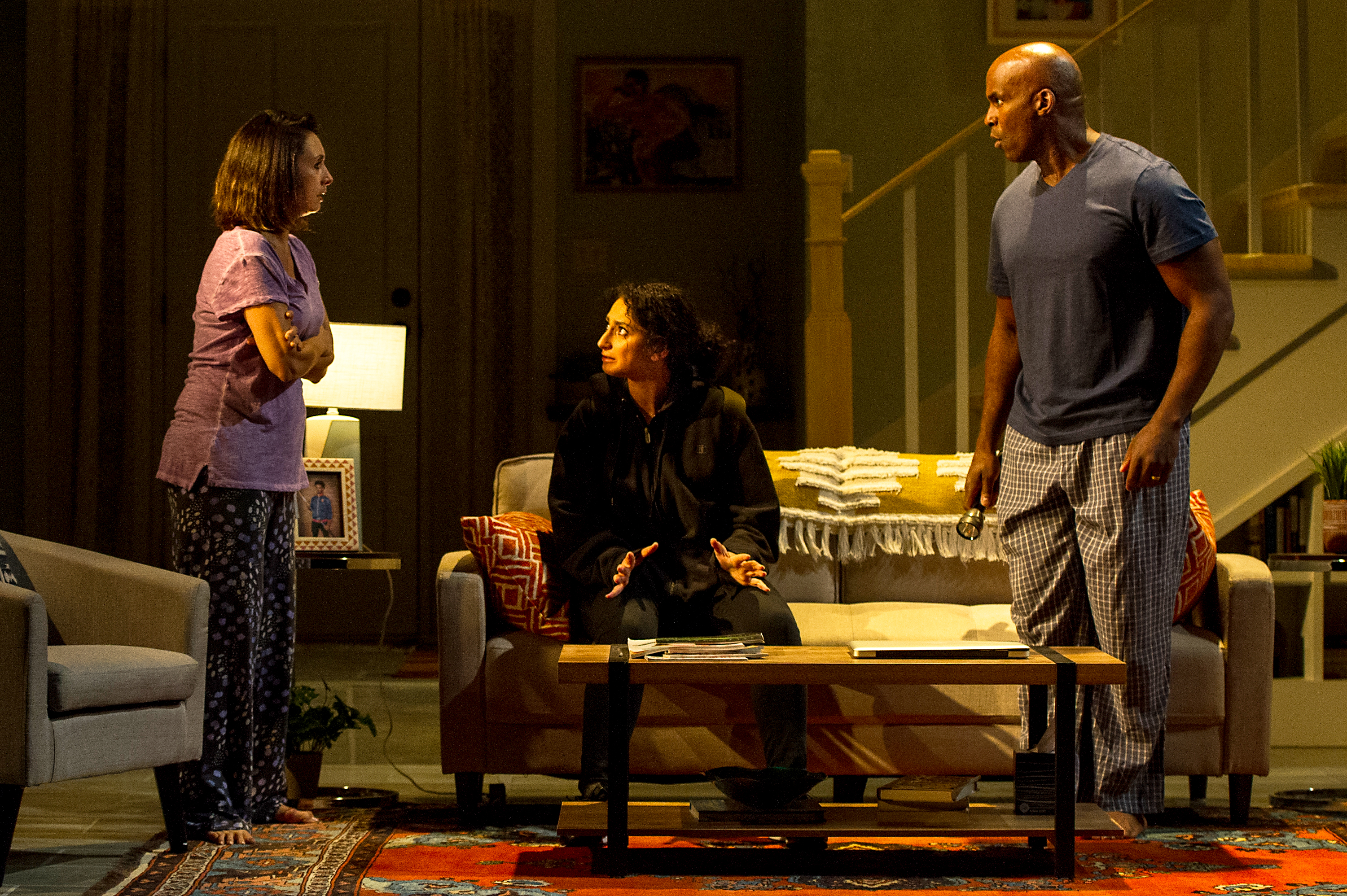 In a Study Guide for Barrington Stage Company’s production of American Underground, the playwright, Brent Askari, asserts that he likes telling “genre stories”—in this case, thrillers.  Publicity for this World Premiere, winner of a Bonnie and Terry Burman New Play Award, asks: “How do you put a thriller on the stage and make it topical, political and scary?” Inherently tense and surprising, the thriller format lends itself to the “kind of fever dream” that haunts Askari as the son of a Shiite Muslim father living in a culture of “anti-Middle Eastern and Islamophobic sentiment.”

American Underground takes place in a “not-so-distant” future, which imagines a sort of Underground Railroad for persecuted Muslims who seek safe houses in an attempt to leave this country before being captured and killed by government officials.  Anyone who is caught helping or harboring Muslims will suffer the same fate.  Rasha Zamamiri plays Sherri, who appears at the home of Rog (Alan H. Green) and Anna (Natascia Diaz), an interracial couple who run a safe house, while their son Jeff (Justin Withers), unaware of his parents’ activities, is visiting during a college break.  Kourtney (Kathleen McNenny) is the government official who suspects the family of treason.

Theatre, a mirror of society, can be a powerful tool to expose injustice and advocate for action, despite the risks.  Witness Atwood’s The Handmaid’s Tale (beginning as a novel and subsequently performed on radio, stage, screen and television), a political thriller that envisions a world in which women are subjugated by a patriarchal, fanatically religious society.  In June Barrington Stage Company produced America v. 2.1:  The Sad Demise & Eventual Extinction of the American Negro by Stacey Rose.  Atwood, Rose and Askari have all created futuristic dystopias, each targeting a particular group.

One way in which American Underground differs from the others is that Askari’s characters periodically interrupt the action by stepping forward, one at a time, to talk to the audience, each speaker highlighted by a spotlight, while the rest of the stage dims (Lighting design by Matthew Richards).  Preceding and following these interruptions is ominous music (Sound design by Fabian Obispo).  This sequence of events can become tiresome and heavy-handed to a sophisticated adult audience but doubtless works well in Barrington’s student matinees.  (Young people are probably delighted to be addressed directly, especially by young actors [Withers and Zamamiri]).  Their explanations may prove helpful to those students who are not newspaper readers or news junkies.  At a recent talkback several senior members of the audience justifiably praised Barrington Stage Company for introducing this prophetic and frightening play to 2000 students in our community.

After a reading in April, American Underground, one of three winners out of 427 submissions to Barrington’s 2019 play contest, was cut and tightened in preparation for this full production.  McNenny and Zamamiri, who participated in the reading, consequently had additional time researching and acquainting themselves with their characters.  McNenny’s government official, smartly dressed in a pants suit (Costume design by Elivia Bovenzi) that belies her purpose, is terrific as she evolves from a curious and friendly questioner (a la television’s Detective Columbo) into a life-threatening force.  For her part, Zamamiri transforms from a desperate victim into someone hardened by the horror and misery she has had to endure.  Justin Withers is effective as he wavers between childhood and adulthood, struggling to master his fear and appear independent and brave.  In the talkback, actress Natascia Diaz describes the interaction among the actors as a “five way ping pong match” or “an eighty-five minute marathon.”  This cast is certainly up to the challenge.  However, although Diaz and Green are accomplished actors, it is hard to imagine them as a couple, partly because of the disparity in their ages (Diaz appears much younger) and partly because of the different styles implicit in their roles:  Green’s Rog is a lovable, energetic cut-up and sports fan, while Diaz’s Anna is a worried, overprotective mother, desperate to save her son from himself and the world around him.  They are also unfairly burdened by having to serve as mouthpieces for the playwright, often engaging in political tracts rather than human interaction.

Mariana Sanchez has designed the family home with care, concentrating on two playing areas—the living and dining rooms.  But it is the sliding glass doors leading out to a leafy patio that catches the eye—it is there that Rog proudly photographs his barbecued salmon and from which an unknown character makes an appearance.  Cell phones play a prominent part in the action, furthering the suspense of each scene.  Director Julianne Boyd, Artistic Director of Barrington Stage Company, keeps up the tension, especially as the chilling conclusion approaches.  But the question remains as to whether Askari’s “fever dream” can satisfy the playwright’s multiple intentions.

American Underground runs from October 2-20 on the Boyd-Quinson Mainstage.  Tickets may be purchased online at barringtonstageco.org or call 413-236-8888.