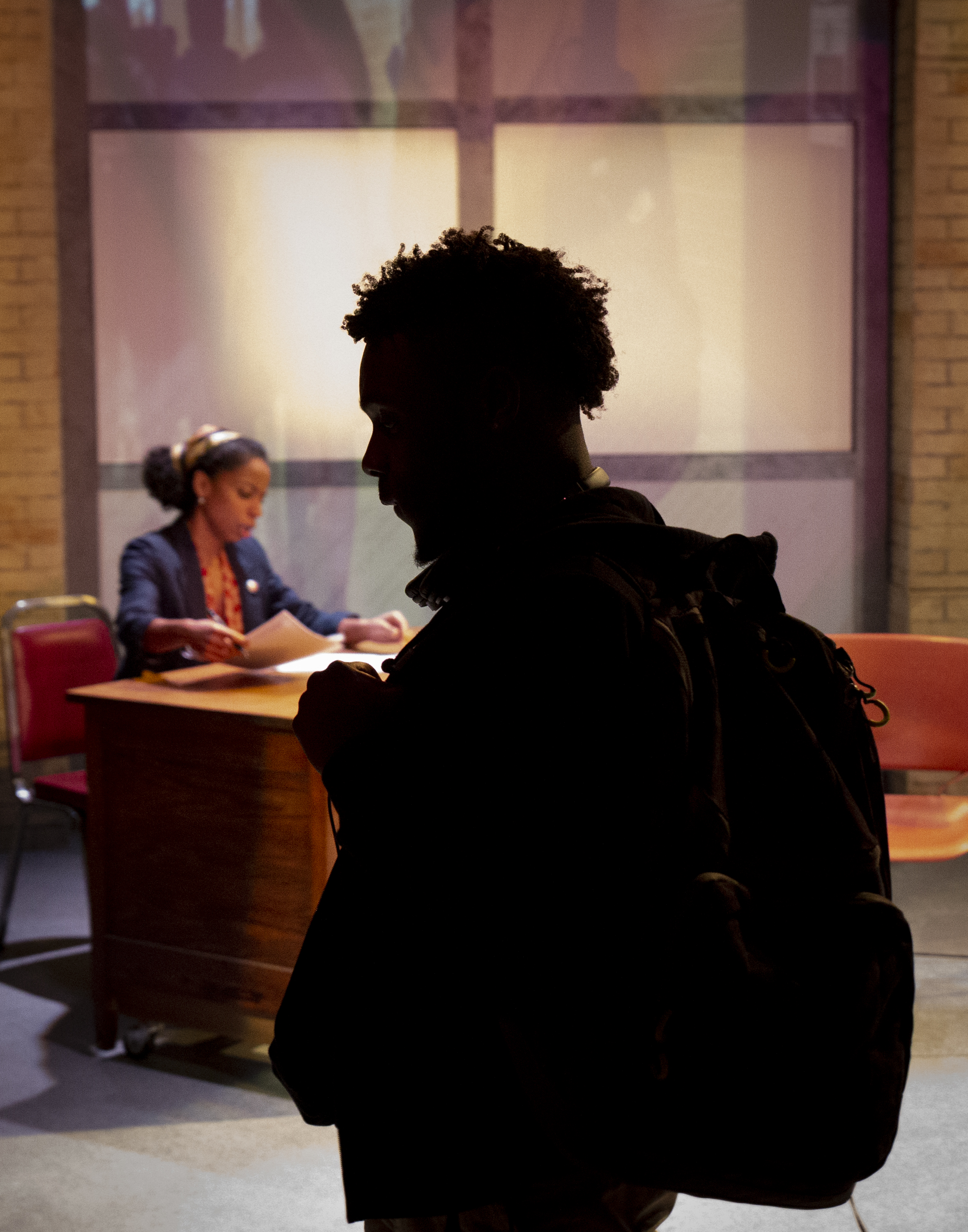 The title of the play, which received its World Premiere in 2017 at Lincoln Center Theater, refers to the School-to-Prison Pipeline that overwhelmingly affects students of color.  But the focal point of the script is a mother-son relationship.  Nya (Alexandria Danielle King), a public high school teacher and single mother, sends her bright and sensitive son Omari (Hubens “Bobby” Cius) to a private school at the insistence of her ex-husband Xavier (Kevin Craig West), who funds his son’s education.  But Omari is not comfortable there, feeling like a token black, and has run into trouble for the third time by violently pushing a teacher.  The school is threatening not only expulsion but also criminal charges against the boy.  Nya is unable to cope with the very real possibility of her son going to prison, blaming herself and society as the pressure closes in around her.

By exploring every character through multiple lenses, Morisseau demonstrates that no one and everyone is to blame.  Omari is filled with rage at his father for walking out on him and his mother; yet Xavier is no deadbeat Dad.  Nya herself was largely responsible for the dissolution of the marriage.  Despite their differences, Nya is still in love with her ex-husband.  Though Xavier thinks he is doing the right thing by giving his son a good education at a fine school, Omari would have been much happier if he had attended the challenging and dangerous public school where his mother teaches.  Does Omari push the teacher because he feels scapegoated or because he identifies the teacher with his father? The ultimate irony is that the way our society handles a student’s rage is to lock him up rather than offer help.

Pipeline veers between actual events and memory via Gwendolyn Brooks’ poem about a group of seven teenagers at the Golden Shovel pool hall:  We Real Cool.  In teaching this poem, composed of eight lines depicting the life and death of these young people, Nya distinguishes between its two publishers:  HarperCollins and Broadside Press, the “first major publisher of black revolutionary writers.” Broadside’s version doesn’t follow the rules of English grammar:  it replicates graffiti writing, because “the street has valuable lessons too.”  Throughout the play, Omari’s recitation of this poem and its ultimate death sentence haunts his mother.  The use of projections, designed by John Oluwole ADEkoje, consisting of disembodied videos with sounds of school fights, images of young men in handcuffs, and even the monitoring of a heartbeat,  adds to the blending of time and space, dream and reality.  Kudos to Gregory Smith, the sound designer, for the musical selections between scenes and the soundscape that underscores much of the production, heightening its tension.

According to Morisseau, the set, here designed by Shelley Barish, should be undefined:  “a place where location doesn’t matter. . . sometimes an alternate reality bleeding into reality.”  Yet Barish has tried to literally represent each location:  a dormitory bedroom (cleverly using a murphy bed), and a counter, complete with microwave, that pulls down, like the bed, from the upstage wall.  For other scenes, large pieces of furniture, wheeled on and offstage by the actors, can become cumbersome.  Michaela Carmelo Bocchino’s colorful lighting helps to establish the dreamlike quality of the piece.  Costumes by Elizabeth Rocho immediately identify the characters.

Simmons’ masterful direction locates the contradictions in each of them as they struggle to communicate their needs and fears.  Cius’ depiction of Omari is very strong, catapulting from flirtatiousness with his girlfriend Jasmine (Sandra Seoane-Seri), to his attempts at being “real cool,” to his vulnerability with his mother, rage against his father, and self-doubt when he finally accepts responsibility for his actions.  Though Seoane-Seri’s showdown with Nya is effective, the actress is not as centered as the rest of the cast and needs a bit more experience.  West’s Xavier, unable to express his emotions, veers from blaming his ex-wife, to offering his son a home and a new school, to utter defeat when confronted by Omari’s explosive anger.  James Ricardo Milord’s Dun, the security guard at Nya’s school who can be charming and flirtatious, is capable of powerful feelings as he reaches deep inside to express his frustration on the job because he cannot always be present for every student and teacher.  Barbara Douglass is funny and forceful as Laurie, the tough teacher who has seen it all.  But it is Nya’s journey that powers Pipeline, as evidenced by Morisseau’s dedicating the play to her own mother: “a master-educator and proud public school teacher for forty years.” King, though she seems too young to be Omari’s mother, is a gifted and convincing actress whose love for her son penetrates our very hearts, as she sinks deeper and deeper into despair, unable to save him or herself.  Sometimes, however, her performance is undermined by stereotypically physical postures of Attitude which can evoke laughter, encouraged by Morisseau’s “Rules of Engagement” in the program urging the audience to laugh or respond audibly.

Pipeline is being co-produced by WAM Theatre and Boston’s The Nora Theatre Company in partnership with Multicultural BRIDGE.  While WAM and The Nora share an interest in presenting plays about gender equity, BRIDGE’s focus on advancing racial justice enables artists of varying backgrounds to work together and to interact with audiences through student study guides and talk backs after every performance.  In March the production will move on to The Nora at Central Square Theater in Cambridge.  In keeping with WAM’s philanthropic mission, a portion of the proceeds of Pipeline will be donated to two beneficiaries:  Harmony Homestead and Wholeness Center and Women of Color Giving Circle.

This compelling play, with its unique combination of multi-dimensional characters, poetic dialogue, and non-realistic structure is well worth a trip to the Bernstein.