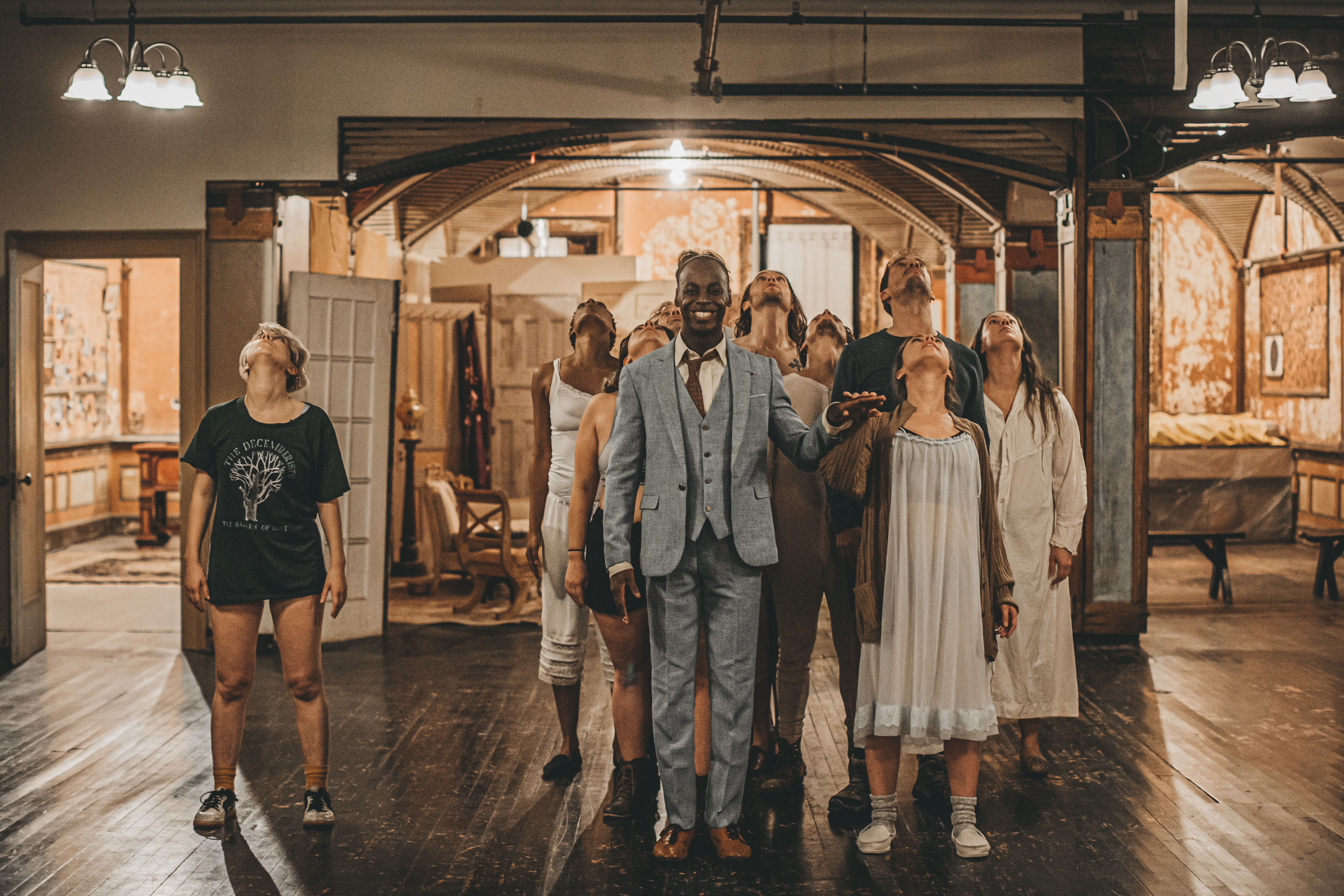 As you enter the Trojan Hotel, the bar and ballroom of which date from 1830, the immersion begins. The hotel, abandoned for decades, has been restored by members of the Troy Foundry Theatre and the cast and crew of Yellow, a world premiere devised work, a commission with Die-Cast, directed by Brenna Geffers, inspired by Victorian-era horror stories, most notably “The Yellow Wallpaper” by Charlotte Perkins Gilman.

After the tickets have been distributed and curtain time is drawing near, the pleasant man behind the desk calls for our attention, announcing what we’re used to hearing in curtain speeches, describing the locations of various exits and restrooms. He also provides some directives.

We are instructed not to touch the actors.

We are informed that some actors may guide us into different rooms.

We are advised to wander into other rooms when we feel the impulse, or when we hear something that draws our attention.

The bar, we are told, will be open throughout the play.

The Troy Foundry Theatre has earned attention as well as kudos since its formation about two or three years ago by presenting an unorthodox kind of theater. Each of their productions happens at a different site, and the audience’s suspension of disbelief so crucial to the experience of theater shapeshifts. The company promotes immersive, site-specific experiences. You don’t sit in a chair facing a stage in order to observe. You are part of the action.

As the show began we were summoned from the bar into a large room, most likely the original ballroom of the Trojan Hotel, where the cast clustered in front of us, speaking in unison, then simultaneously uttering different words, moving, making odd chuffing noises. The cluster soon scattered, and that is when I felt a firm, gentle hand on my shoulder: I was being led by an actor who I would later learn was called The Invalid (Andrew Carroll). We entered a small room dominated by a bathtub. The Invalid, clad in shabby pants, spoke with urgency as he climbed into the tub, his voice fueled by an oddly fearful intensity. He seemed focused on convincing me of…what? Something about his mother, some series of events that he was compelled to relay, with rapidfire muttering as his body squirmed and undulated. The Invalid was mad. I knew I was in an asylum. Another actor, The King (Jahzeer Terrell), well groomed and nattily dressed, joined us. He was by all appearances “normal,” but his behavior, climbing into the tub with The Invalid, pulling at him, then moving in tandem, then splitting apart, was anything but normal. Were both men mad?

I ventured into other rooms, where other men and women shared their own strange, compelling stories. Each actor was remarkably flexible, physically and verbally, and each story was laced with leaping or crawling, dancing or singing. The entire cast inhabited their roles completely and individually, and would come together to create a searingly strong ensemble. At times they seemed to move as a singular organism.

As I aimed to observe what was happening in various rooms, in time I realized the actors were repeating monologues, dialogues, songs, and sounds. Yellow revealed to me that it was not a linear play. All of the action in each of the rooms is happening simultaneously.

It was only after the play ended that we received programs. That felt entirely in line with the immersive experience. We had to receive and observe the individuals as they showed themselves, without preconceptions formed by knowing about the actor.

Unfortunately, the Trojan Hotel is not wheelchair accessible. We had been informed before the play that the floors were somewhat warped and uneven; during the 90 or so minutes, anyone who has difficulty walking or standing for long periods of time might find him/herself uncomfortable scurrying to observe what is happening in each of the rooms. However, several of the rooms have chairs and sofas, and audience members can pretty much wander and sit as they please.

The profoundly immersive experience that is Yellow may not be to everyone’s liking because of the demands it makes on its audience. Please note that the play is not appropriate for children. I applaud Troy Foundry Theatre’s successful mission to create theater that is provocative and immersive, interweaving artists of different disciplines, and I would strongly encourage theater lovers to wander through this very different artistic adventure.