REVIEW: “Fiddler on the Roof” at Proctors 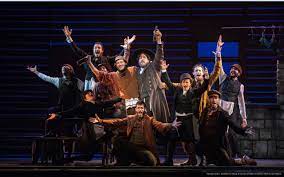 REVIEW: “Fiddler on the Roof” at Proctors

Since opening on Broadway in 1964, Fiddler on the Roof has become one of the most frequently produced musicals in theater history. Based on Yiddish stories written by Sholem Aleichem at the turn of the 20th Century, it presents a look at Jewish life in the Imperial Russian shtetl of Anatevka.

In 1905, Tevye (Yehezkel Lazarov), a poor milkman, struggles to support his wife Golde (Maite Uzal) and his five daughters, Tzeitel (Kelly Gabrielle Murphy), Hodel (Ruthy Froch), Chava (Noa Luz Barenblat), Shprintze (Emma Taylor Schwartz), and Bielke (Carly Post). Although the threat of pogroms and forced expulsions by the Russians is ever present, the townspeople go about their daily lives until escalating violence forces them to flee Anatevka forever.

Based on the 2015 Broadway revival, this slightly adjusted version delivers the celebrated, much-loved score and choreography with infectious glee, and the rich orchestrations meet their match in a cast that sings exceptionally well. The direction, originally by Bartlett Sher, recreated by Sari Ketter, was brisk and beautifully balanced. The opening-night audience seemed to savor every moment. I often complain about the acoustics at Proctors, but this time the lyrics were loud and clear. I only wish that I could say the same about the spoken dialogue.

Especially delightful were the three older daughters, each of whom had a sweetly distinctive personality. Murphy, Froch, and Barenblat’s rendition of “Matchmaker, Matchmaker” was downright charming. Their prospective suitors, Motel (Nick Siccone), Perchik (Nic Casaula), and Fyedka (Jack O’Brien), were equally engaging.

Lazarov, an energetic, amiable performer, played Tevye a bit too boyishly for my taste. Tevye is a character whom I see as an archetypal theatrical Fool, the character who is essentially wise and a revealer of truth through humor. Lazarov was clownish at times; for example, during an argument with Golde, he made silly faces and imitated her. Tevye is funny, of course, but that is his way of coping with a difficult life, and the undercurrent of melancholy was missing. Because of that, when he expressed rage or grief it seemed oddly surprising, rather than deeply felt. Similarly, Uzal, who has a lovely, lustrous voice, presented a Golde who was cold and poker-faced, even expressionless, when she should have been tough, but feelingful.

Still, the supporting cast, including Yente the matchmaker (Carol Beaugard), Lazar Wolf the butcher (Jonathan von Merling), the Rabbi (David Scott Curtis), and so many other villagers, was first-rate, colorful, and authentic. The songs have aged very well, and I must admit, familiar as they are, I was thrilled when “Tradition,” “Miracle of Miracles,” “Sunrise, Sunset,” and the rest of the score burst into being. Each time, it felt like a long embrace from an old friend.

Michael Yeargan’s set design was economical and evocative, each scene, whether in Tevye’s yard, Motel’s tailor shop, or in the woods, created an authentic environment while allowing enough open space for the superbly boisterous choreography (originally created by Hofesh Shechter and recreated by Christopher Evans). Catherine Zuber’s costumes were perfectly executed.

Fiddler on the Roof is family friendly without being sappy. Whether you’ve seen numerous productions over the years, as I have, or are only familiar with the film or the score, I think you’ll find revisiting this vibrant show very rewarding. If you’ve not had the pleasure of seeing it, or would like an opportunity to introduce a child to the multilayered experience of a great American musical, this show would make an excellent choice, particularly at this time when we can enhance our awareness of our shared background as immigrants.