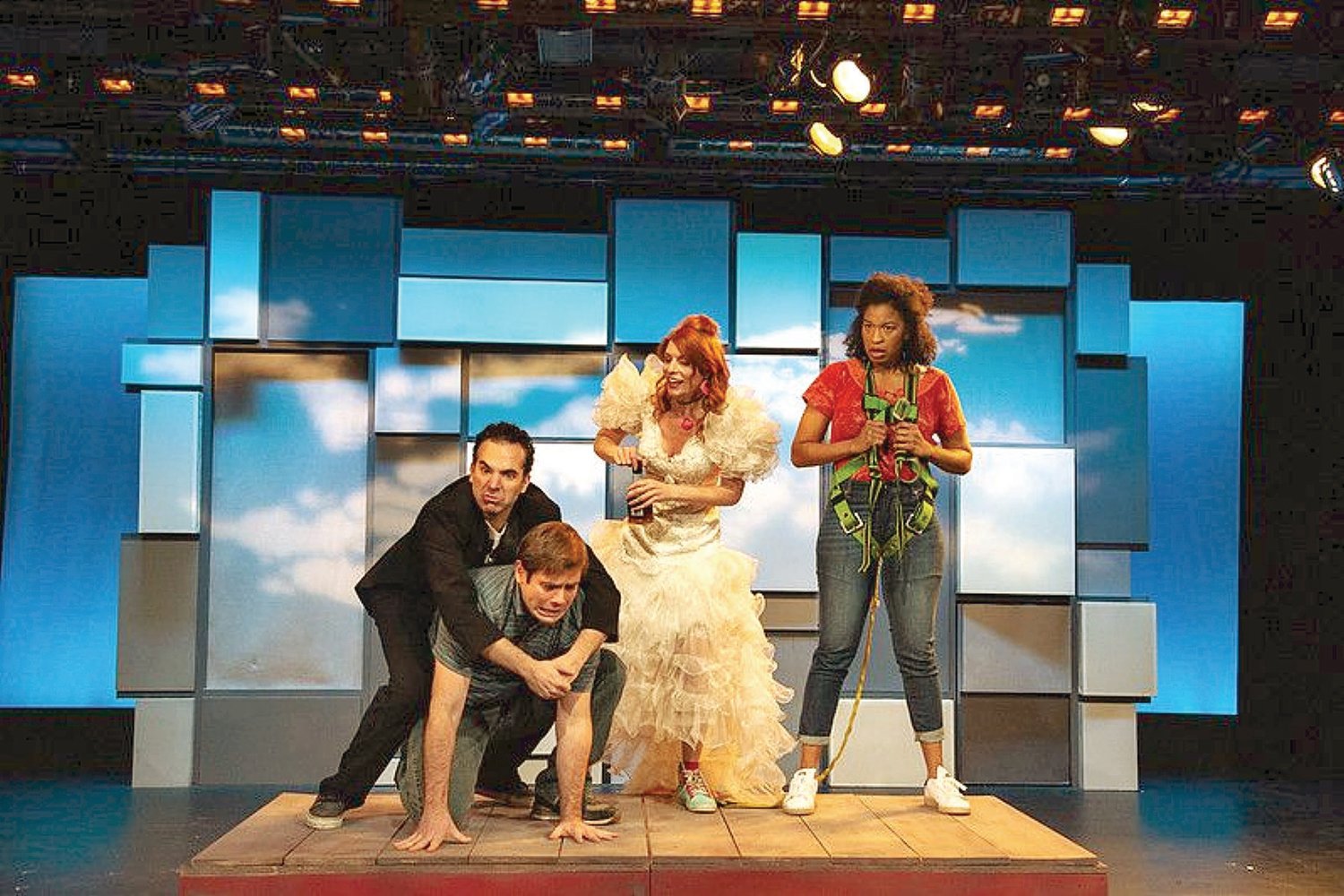 Barrington Stage Company has produced its Ninth annual presentation of their 10X10 New Play Festival as part of Pittsfield’s Upstreet Arts Festival.  The ten ten-minute plays by ten different playwrights run the emotional gamut from hysterical to controversial to poignant.

The ten plays are performed by a cast of six who display a wide range of abilities in each of their myriad roles.   In some cases they perform in two or three roles, one right after the other, changing character and costume in the short time that sets are moved between plays.  These are tours-de-force as their versatility abounds along with that of the directors Julianne Boyd and Matthew Penn.

The two funniest works are the first, “Five Seconds” by Connie Schindewolf, directed by Mr. Penn and “Oy Vey Maria” by Mark Harvey Levine, directed by Ms. Boyd.  The opener is a take-off on the abundance of ten-minute play festivals found in regional theatres across the country. Instead of having ten minutes, two auditioning actors, Maya Loren Jackson and Doug Harris, are given five-second plays to act.   The director’s (Kenneth Tigar) enthusiasm is as comic as the machinations the performers enact to get the job. Levine’s “Oy Vey Maria” depicts the Christmas story through the eyes of Mary’s (Ms. Jackson) caricaturized Jewish mother Ann (Peggy Pharr Wilson).  It is tongue-in-cheek humor involving Joseph, (Mr. Harris) Mary’s father Joachim (Mr. Tigar) and the three wise men (Peter Macklin, Keri Safran and Mr. Harris)

There are several other comic works including Cynthia Arsenault’s “Digital Detox” (Ms. Boyd director) which satirizes contemporary society’s dependence on ipads, laptops, cell phones etc. etc. etc.  “Jill Takes a Leap” by Scott Mullen, directed by Mr. Penn, focuses on a young woman (Ms. Jackson) about to be married who is trying to fulfill her bucket list including driving her car at 120 miles an hour down a deserted road which leads to the event in the play, doing a 30-floor bungee jump off a cliff.  Ann Marie Shea takes us back to the first-ever rehearsal of Shakespeare’s Hamlet in “With Improvements by the Actors,” joyously directed by Ms. Boyd.  Jessica Provenz’s “Stay, Please” directed by Ms. Boyd is a gentle comedy of two widowed and lonely senior citizens (Ms. Wilson and Mr. Tigar) living in a gated community.

Several of the plays have a more serious tone.  “My Body” by Richard Bublitz and directed by Ms. Boyd is set in the future when men are required to wear an electronic collar that prevents them from sexual activity until they are either engaged or married.  Erin Osgood’s “Minor Deviations” also takes place in the near-future yet ends with a Poe/O.Henry twist. Mr. Penn has directed this piece and “Closing Doors” by John Minigan, a story that takes place in an elementary school the day after the actions of a teacher (Ms. Jackson) during an active shooter drill has caused chaos.  This play has the potential to become a full-length work. The most poignant piece is Deirdre Girard’s “Are You One Of those Robots” which Mr. Penn has directed with care and insight. A young woman (Ms. Jackson) has called a help line simply to talk to a sympathetic voice about her conflicts. The operator (Ms. Wilson) is not the ideal person for this conversation.

As sharp as are the acting and directing, the technical elements complement their work.  The upstage wall designed by Brian Prather and Joseph Martin consists of blue and white square and rectangular shapes some of which have lights in them, designed by Luca Pawelski, that help to set the mood of each piece.  The atmospheric music selections by Alexander Sovronsky in back of the scene changes are handled more-than-efficiently by the backstage crew and the cast.

This 10X10 New Play Festival is an absolute treat of bang-up comedy and sensitive dramas beautifully performed and directed.