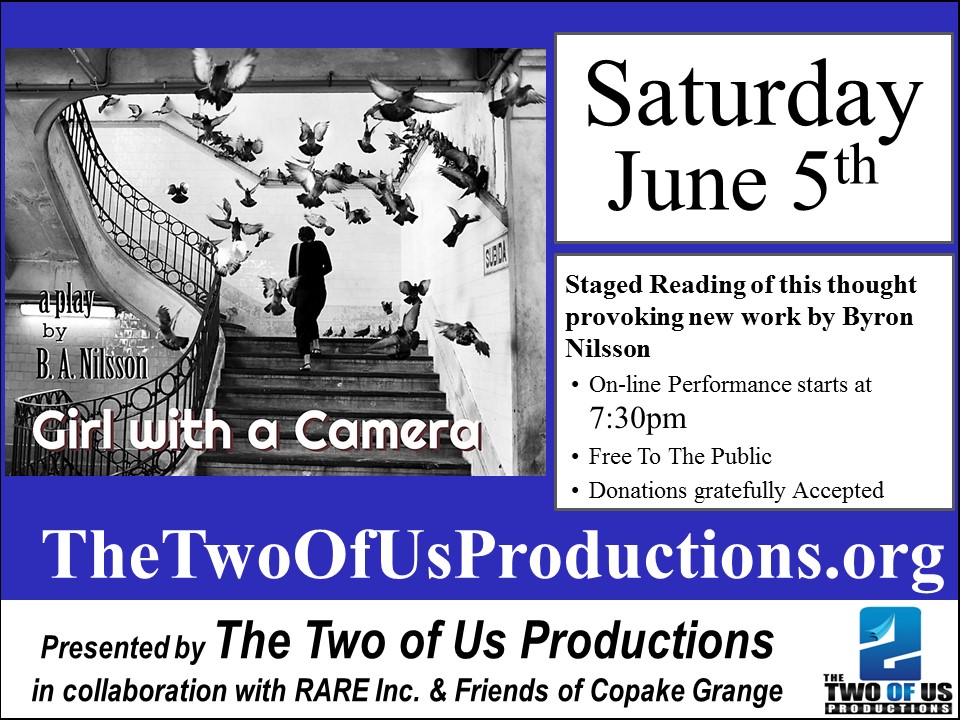 COPAKE, NY —The Two Of Us Productions, the award winning theater company based in Columbia County NY, is pleased to present Girl With A Camera, a new work by Byron Nilsson Saturday evening June 5th, 2021 in the 8th production in their 2021 Virtual Live-Staged Reading Series.

How does a creative artist come to terms with sudden fame? Photographer Ivy Wilmot found success as a photo-journalist but became a public figure when she married a movie star. As the marriage unraveled, so too did her career. There was another man in love with her – but he was the FBI agent investigating her father. Girl With A Camera shows us a life that couldn’t be constrained in the borders of a photograph.

To learn the rest of the story you’ll have to RSVP to us at www.TheTwoOfUsProductions.org and see it all for yourself.

Girl With A Camera will be performed as a virtual staged reading on Saturday June 5th, 2021 at 7:30pm.  This performance is free to the public, donations are gratefully accepted.  To RSVP for your reservation please visit www.TheTwoOfUsProductions.org or call 518-329-6293. The Two Of Us Productions is well known throughout the Hudson Valley for presenting quality theater, both musicals and dramas.  Their recent productions of Sweeney Todd, Chicago, Les Miserables, next to normal, Deathtrap, Lend Me A Tenor and Jesus Christ Superstar were all recognized by the Theatre Association of NYS with multiple awards, including outstanding work by the company, outstanding performance by the orchestra, excellence in direction, and many individual actor awards.

Author Byron Nilsson is an active writer and stage performer.  As an actor he has worked with the NYS Theatre Institute, appearing in 1776, Miracle on 34th Street, A Wonderful Life, Fiorello!, Around the World in 80 Days, and with many other companies oncluding the Lake George Opera, Syracuse Opera, and Musicians of Ma’alwyck.  Byron also presents a cabaret-show setting with pianist Malcolm Kogut, Songs to Amuse which does, they hope, just that, presenting an array of funny and forgotten ditties that reach back to vaudeville and music-hall days.  As a script & music writer some of his produced shows include Mr. Sensitivity as part of the 2009 NY Fringe Festival;  Drivers at Ensemble Studio Theatre; the one-act musical iFind You @ Last with music by Tom Savoy; and his cantata Buxtehude’s Daughter with the Musicians of Ma’alwyck.  Byron is a member of Actors Equity, SAG-AFTRA, and the Dramatists Guild.

These performances are supported with funds from Hudson River Bank & Trust Foundation, Stewart’s Shops, Bank of Greene County, Rheinstrom Hill Community Foundation, Greylock Federal Credit Union, and American Endowment Foundation.  This project is also made possible with funds from the Decentralization Program, a regrant program of the New York State Council on the Arts with the support of Governor Andrew M. Cuomo and the New York State Legislature and administered in Columbia County by the Greene County Council on the Arts dba CREATE Council for Resources to Enrich the Arts, Technology & Education.